So it isn’t often we think ourselves as that awkward L-shaped brick from classic computer game Tetris, but fundamentally that’s how aircraft seat designers see us. Unfortunately-shaped wedges that have to fit neatly into a rectangular shape. In a constant fight to give airline passengers more space, more comfort and a better quality experience, the war of the seat configuration continues. British Airways’ latest patent application shows that perhaps the ideal future of front of the plane comfort isn’t as clearly cut as we once thought.

The Past
Originally, in 1999 British Airways brought the flat bed concept to the skies with it’s Club World seat. Seen as a quantum leap in Business Class comfort, with space only considered for the super wealthy, who could afford First Class opulence. Since then many carriers have offered similar comfort, but the forward and backward concept took into consideration the ergonomics of the body, offering more space to the wider upper body. This was done by creating interconnecting forward-backward seats that operated as a singular unit, reducing seat costs and increasing space where it was needed – around the shoulders.

The original club world seat was then fairly quickly redesigned, to what we see on BA’s fleet today. The modern seats offer more privacy, more space, and more technological advancement. But the seat concept is sound, even the older seats can still be found on BA’s subsidiary OpenSkies 757 fleet now titled ‘Biz Bed’.

The forward backward concept was new, and whilst open to initial scepticism, proved a success, and was quickly admired by business travellers, who enjoyed the extra comfort, for little extra price, due to the LOPA (the seat’s real estate on the plane) being hardly compromised compared to the big bucket recliners that the rest of the industry enjoyed.

Virgin Atlantic, British Airways’ younger upstart though, turned the market on its head, by offering significantly more space, a dedicated sleeping surface, and all-aisle access. Virgin, started by Richard Branson competed against BA (Who still offered first class) by marketing their Upper Class ‘Suite’ at the same price point of the Club World product. With extra elements, from pyjamas and an onboard bar, the war was well and truly on.

Until recently, there was little improvement on either of these concepts, and the herringbone format was taken on by more and more carriers, from Delta, Air Canada, Cathay Pacific to Air New Zealand. The all aisle access concept proved to be increasingly appealing to solo passengers, whose main gripe was having to clamber over their fellow traveller to use the restroom. In comparison, British Airways passengers liked the seating configuration, as it was more socially interactive for those travelling as a couple.

The Present
Zodiac Aerospace turned the market on its head with the launch of its Cirrus and Aries seats who basically reversed the seats around, facing the passengers away from the aisle, to increase the sense of privacy and sense of space. These became increasingly popular, with Cathay Pacific and American airlines becoming two major carriers adopting the new seating for their business class cabin.

Even Virgin Atlantic reworked their seats to be able to stagger their herringbone and fit more passengers in without taking away space from the paying guests. As for the forward backward configuration, American Airlines managed to combine the best of both worlds on their 777-200s, offering a forward backward herringbone concept, which actually has been proven as the most effective way of creating space for the passenger.

British Airways on their A380’s due to the space and width of the aircraft have been able to adapt their business class seats to provide a little more space for their passengers and improve the experience, but based on their latest patents, this wasn’t going to be enough for the one airline everyone is looking to for the benchmark of airline business class comfort. 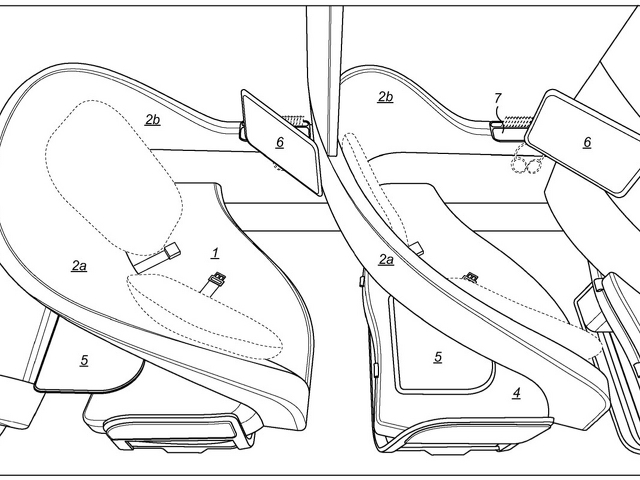 As originally announced by our good friends at Australian Business Traveller, British Airways have launched a patent for their brand new business class seats, designed by award winning London based Priestmangoode. What’s unique and interesting, is that British Airways have finally (potentially) surrendered their forward/rearward seating concept, and adopted the herringbone seating configuration, perhaps conceding their competitor had a superior product.

The forward/rear seating concept isn’t dead though, as the EDC created the forward rear business class seat for Etihad’s 787 and A380, which is about to be released. The difference to this product is that every seat offers aisle access, and more importantly, with the curving of the corridor has even managed to offer increased space to those in their 787’s first class cabin.

Unlike their OneWorld companions, American, Cathay Pacific and Qatar Airways, British Airways has decided to have their passengers sleep with their feet to the aisle which seemingly seems an interesting choice (In some cultures, the showing of the sole of the foot as seen as an insult) however to us here at thedesignair.net, whilst we prefer the privacy of the seats that face away from the aisle, we prefer the sense of space, by looking into the cabin, rather than at a wall. Priestmangoode have attempted to address both options, by offering two seating configurations for just the one seat, either facing to or away the aisle. 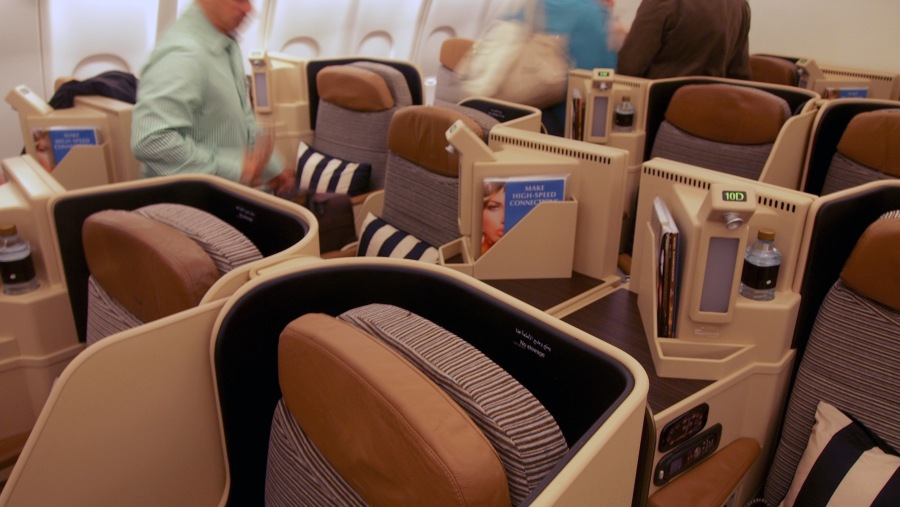 Carriers such as JAL, Asiana, and even Etihad and Airberlin all offer a staggered forward facing concept, which has also proved successful, all with aisle access, and increased privacy for certain seats. The forward facing seats are more conventional, yet offer a less economical seat configuration with increased square foot coverage per passenger.

So what is the future of the business class seat? It seems that the forward/rear facing seats that changed the business class experience some 15 years ago may have their demise written on the wall, yet carriers like Etihad have proved the seating concept still has great merit, and isn’t going anywhere just yet. But the herringbone format that has proved more popular both by seat designers and consumers alike is still being refined, with no clear definition on what is best for both the airline and the passenger. Will we end up seeing more interconnecting seats, or will we as consumers end up voting with our feet, that aisle or window facing seats are the way forward. Whilst BA’s seat is still only in the patent stage, one thing is for sure: space, comfort and the passenger are at the heart of seat designers minds when it comes to the future of business class seats. And that’s all good.

One thought on “Tetris War”