The world went crazy this week as Star Wars Premiered in Los Angeles. Part of the action were ANA who’s partnership with the Star Wars franchise runs deep. The force certainly is strong with ANA. Japan’s largest airline shuttled the cast and crew of Lucasfilm’s Star Wars: The Force Awakens from the World Premiere in Hollywood on Monday to the London Premiere in its custom R2-D2™ ANA JET, a Boeing 787-9.

Starting at the Premiere on Monday, ANA had a large scale model of their 777 Star Wars Jet which was signed by the stars of the franchise. “ANA is proud to be part of the global celebration for Star Wars: The Force Awakens,” said Osamu Shinobe, President and CEO of ANA. “As we fly passengers to Japan and across the world, we aim to provide our guests with the magic and joy that these films spark. As the first aircraft to be decorated with Star Wars  livery, there was no question that the R2-D2 ANA Jet was chosen to fly between the U.S. and U.K. premieres of Star Wars: The Force Awakens.”

Following the World Premiere of Lucasfilm’s Star Wars: The Force Awakens  in Hollywood, the film’s stars including Harrison Ford and newcomers Daisy Ridley and John Boyega, the director of The Force Awakens J.J. Abrams, and producer and Lucasfilm president Kathleen Kennedy, flew on the chartered flight from Los Angeles to London. The flight number of the trip was NH 1977, in honor of the first Star Wars  film release in 1977.

The Big Picture – The Premiere in Los Angeles 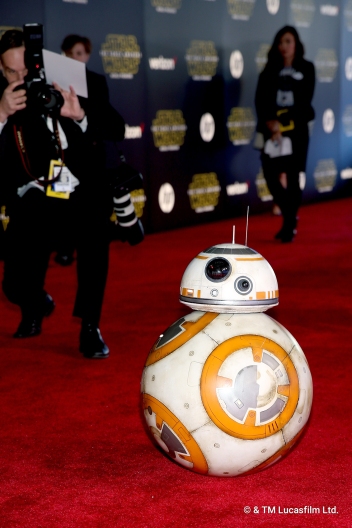 The R2-D2 ANA Jet is the first ever aircraft in the world to feature a Star Wars character on its exterior and is a product of an agreement between ANA and The Walt Disney Company (Japan) Ltd. First unveiled at the Star Wars Celebration in Anaheim, Calif., earlier this year, the R2-D2™ ANA JET, a Boeing 787-9, started its regular flight in October and now flies to various destinations, including Europe, Asia, China and the U.S.

At the World Premiere, a large aircraft modeled after the BB-8™ ANA JET took to the red carpet. The jet is another aircraft decorated with special livery featuring BB-8, the new Star Wars droid introduced in the film. The jet is a Boeing 777-300ER and is scheduled to begin its service on international routes from March 2016 onwards, principally between the North America and Japan route. 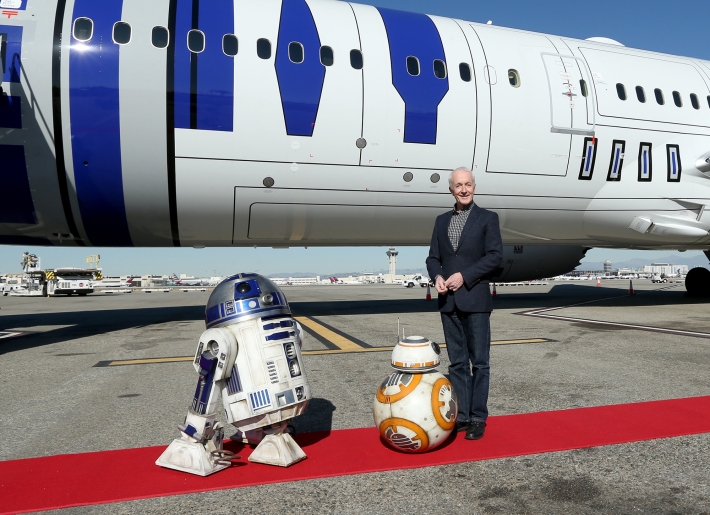 Through the Star Wars™ Project, ANA hopes to further its international presence and connect Star Wars fans around the world. With demand increasing for flights to Japan and Asia, ANA is committed to linking global markets and offering the best possible flight experience through innovative partnerships and branding opportunities.

The Big Picture – Flight from Los Angeles to London 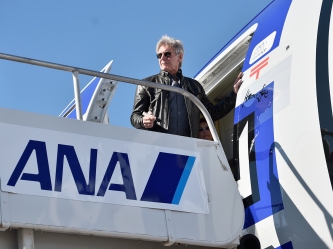 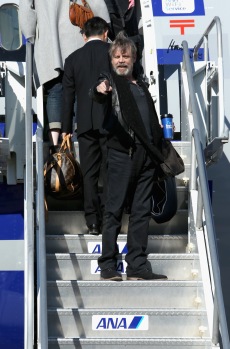 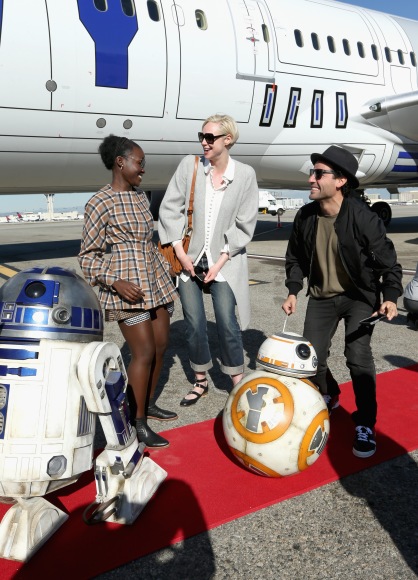 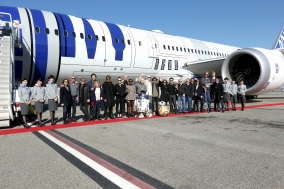 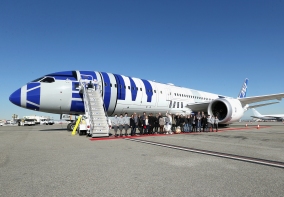 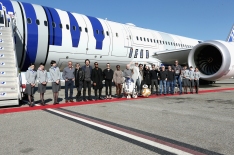 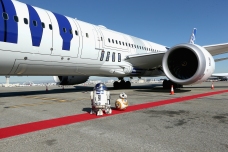 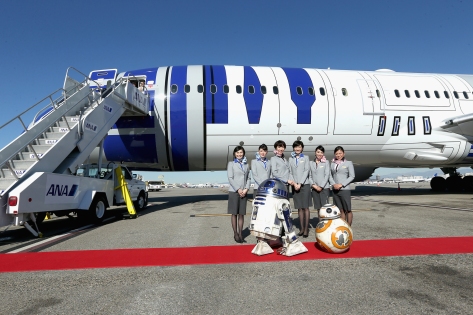 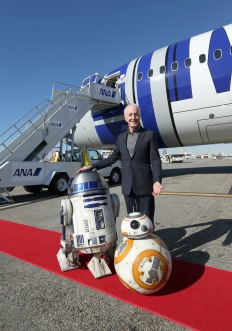 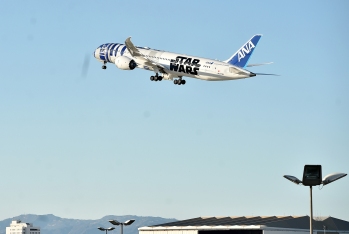 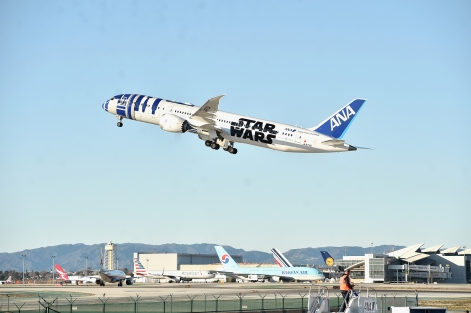 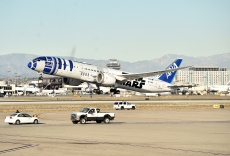 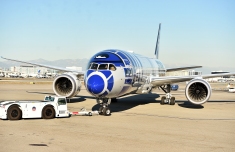 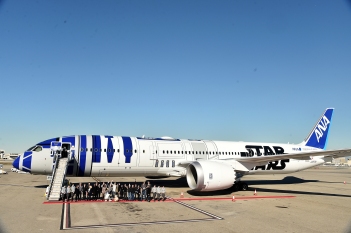 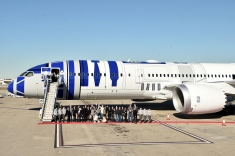 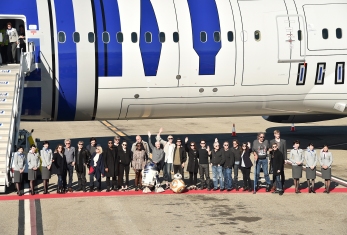 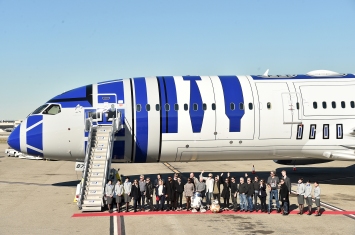 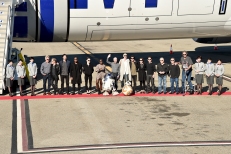 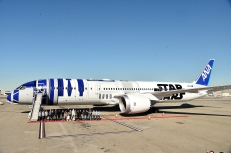 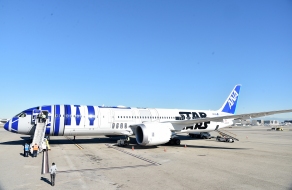 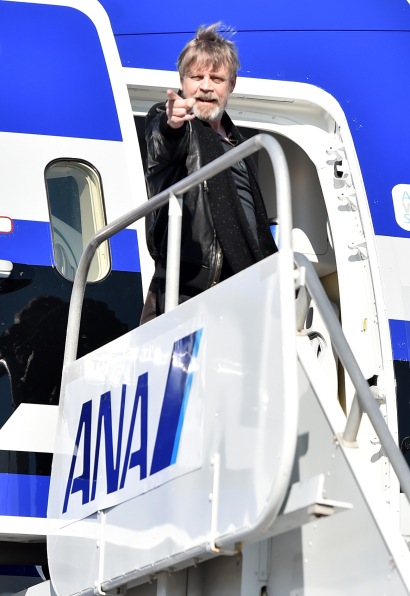