Our latest trip with Fiji Airways brought us to the other side of the world from our London offices, where we managed to take some well needed rest before heading all the way back. We were lucky enough to stay in the award winning Likuliku Lagoon resort (one of our Top 10 Destinations for 2014), set on the Mamanuca archipelago just 25kms west of Vitu Levu, the mainland of the group of over 300 tropical islands in the South Pacific.

On arrival to Nadi, our transfers had been pre-organised by the resort, and we were welcomed at the airport by the transfer representative. With a few hours to burn due to the really early arrival of the LAX flight, we were recommended to head to a nearby airport hotel to grab a bite to eat before the sun was up and we could get across to the island. Now, there are four possible ways to get to Likuliku, by the shuttle catamaran that has the hotel as a stop on a route of resorts, that takes about 2 hours (not a bad way to see all the islands) or a private speedboat, that will whisk you to the resort in just 45 minutes both from the nearby port. However, what we really recommend is the other two options. Either by helicopter, where you arrive to your tropical paradise as if you were some kind of James Bond villain, or our recommended option of Seaplane. The seaplane and helicopter both leave from Nadi International airport, and within 10 minutes from check in, we were on the seaplane, that sat 8, strapped in, being given a safety briefing from our pilot, who in shorts and barefoot, was the laid back pilot that we all secretly want to be. 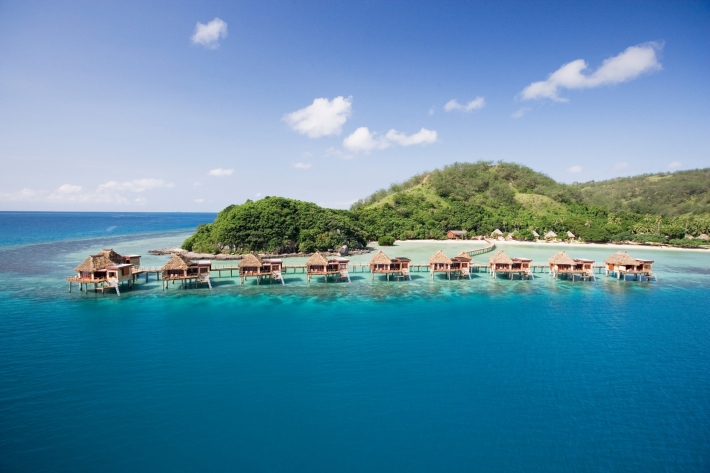 After a quick take off, our windows were filled with the view of the crystal clear aqua blue seas, coral reefs, deserted islands and sand bars were all our view as we skirted above the ocean at 500ft. We made a quick stop off at a nearby resort, feeling guilty (for a very short time) that we were staying in ultimate luxury compared to this hotel, before whisking off to Likuliku. All in all, the journey took about 15 minutes, and was thoroughly enjoyable.

On landing on the sea, we were greeted by a vista of the resort, isolated on its own sandy bay, this felt so removed and isolated from the rest of the world, it was one of the best arrivals at a hotel we have every had. As we departed the plane, we were met by a launch from the resort. Our luggage and ourselves were greeted on the boat before the plane started up again and headed off into the big blue yonder. 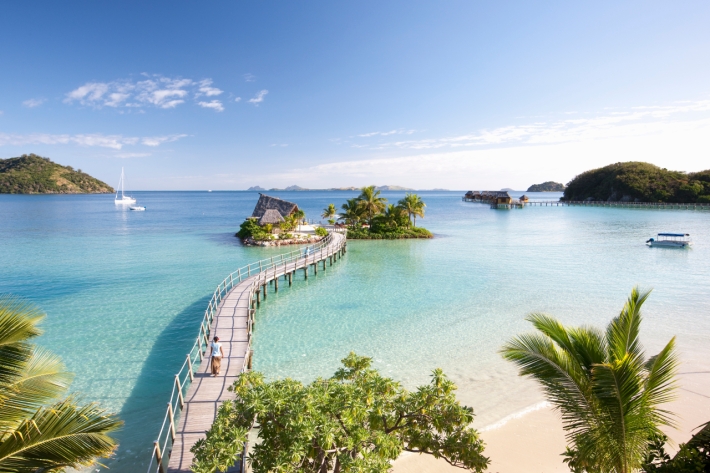 As the sound of the aircraft engine faded away, the silence was filled with singing and music of our greeting party on the jetty at the resort. Every guest is welcomed with song at Likuliku, it is the very core of Fijian culture, to sing, dance and celebrate others, and the natural warmth and enthusiasm of the staff was evident without even stepping food on shore. With a big smile, the welcoming ceremony was the perfect way to start our stay. Knowing the journey we had, the staff immediately guided us to the restaurant with a cold towel and refreshing cocktail before sitting down to a full hearty and fresh breakfast whilst our check in was completed for us, and luggage taken to our Bure (a traditional Fijiian dwelling). 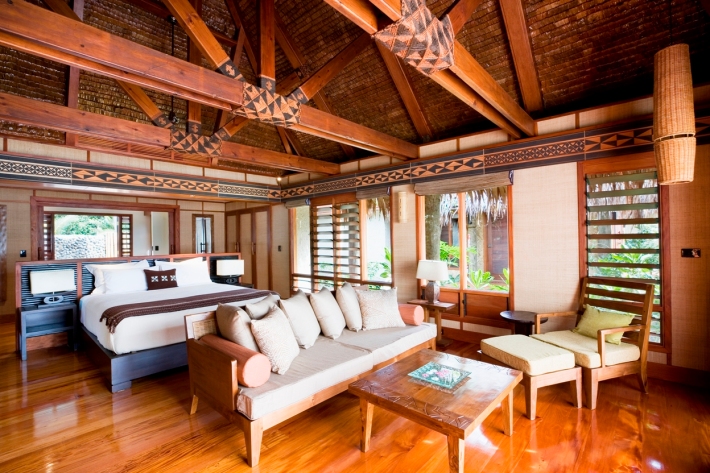 From this point we were left to our own devices, and whisked across to our deluxe beachfront bure at the far end of the island, where one of the staff introduced us to our room. The whole ‘villa’ for the best use of the word was expansive, luxurious and heavenly. All the rooms have a huge amount of privacy, and offer a large living and sleeping area, with large king size beds, (or twins) outside deck and bathroom area, which offers his and her sinks, outdoor and indoor showers (or in the case of the overwater villas a large Corian bath large enough for two) The rooms start at the Garden Bure level, which offer the above, and sit just a few steps back from the beach, still with a sea view, then a beachfront bure, which offer the same, but literally on the beachfront. Then the luxury beachfront which we were had, which featured an outside plunge pool, (which was the temperature of a bath!) and at the top of the range, the 10 overwater bures, each with its own ladder down on to the pristine coral reef below.

The dining in the resort was delightful and beautifully presented, led by a New Zealander head chef, surprising considering the limitations of working a kitchen of this level on a remote island. The resort was all inclusive (minus beverages) offering buffet breakfast in the morning along with a menu of main breakfast options, including a mud crab omelette which was delightful, and fresh green coconut water straight from the coconuts themselves.

Lunch was a different affair, starters were small but perfectly formed (and don’t take small as a negative, after a few days, the amount of feeding meant smaller portions were good!) and the limited choices of 3 courses meant that quality could be top notch. The fish dishes in particular were beyond extraordinary. Deserts were also out of this world. 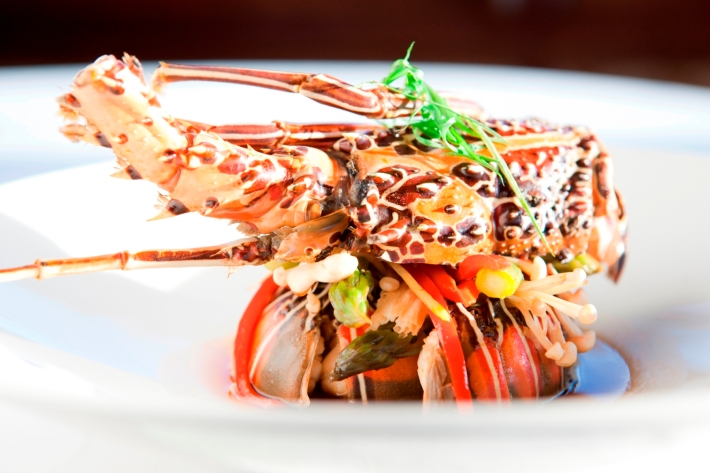 Dinners however were the star of the show here at Likuliku, normally a la carte, apart from two nights a week where either a Fijian feast is put on where the meats and certain dishes are cooked in the traditional earthen ‘lovo’ oven, wrapped in Pandan leaf – delightful! One night a week is the de-gustation menu as well, which is 8 courses of fine dining, usually under the stars, (weather permitting) both of these are a break from the usual a la carte menus. To accompany the menus is an extensive, and reasonably priced wine and cocktail list, and we even tried pushing their cellars to breaking point over our stay, and yet they never ran out of our favourite bottle! 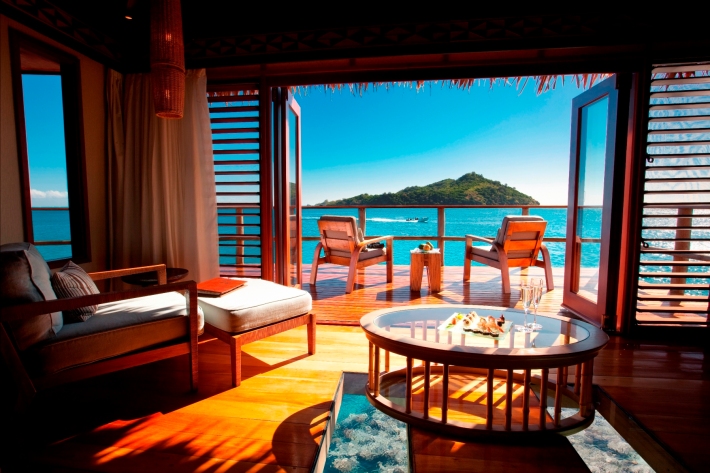 We were lucky enough to try out the spa at the resort too, set amongst the mangroves behind the over water bures. The newly built spa is the latest addition to the 7 year old Likuliku property, and features a large amount of treatment rooms and a staff of 8, making sure that you are always capable of booking a treatment, which are both relaxing and reasonably priced. 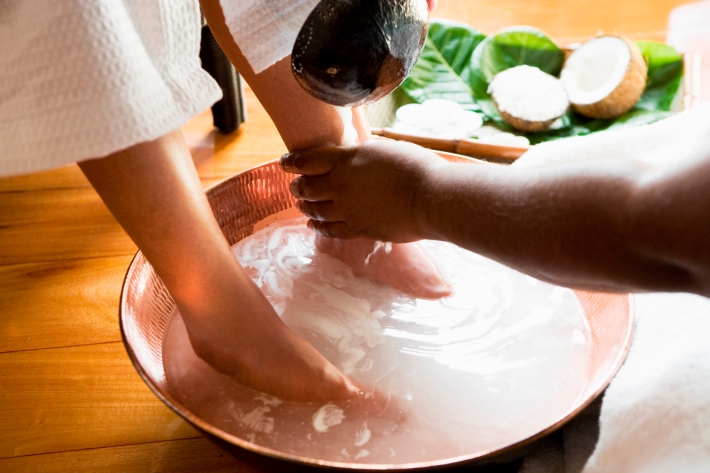 All the non-motorised activities on the resort are free, lead by the activities team, including all the main water sports. But the wonderful element to this resort is their support of their environment, you can visit the local village that the resort contributes towards, tour the historic points on the island, traditional dancers and you could even take a medicine walk like we did, showing all the different flora around the resort and how they used to be used by locals for their medical requirements. Also well worth a visit, is the Honeymoon island, a small island just off the shore, which can be visited with a fully stocked picnic for a bit of privacy for a few hours. The coral reef there, like around the resort is amazing. It’s by far some of the best we’ve seen and better than that found on Hadahaa, one of our previous hot hotels. So many fish, and such a wonderful variety of coral and sea life. If see life isn’t your thing, feel free to take a look at the endangered Iguanas the resort has found and is protecting, or even spend some time with the resort manager’s delightful dog. Coco.

The best place by far to visit the coral reef is from your own ladder at the over water villas, whose extra benefits also extend to a daily treat being brought to your bure every afternoon and private sun deck looking over the calm pacific seas. Other touches we loved were the glass floor and under-bure lighting, meaning you could look at the sea life all night long from the comfort of your bure if you required. The over-water bure, like the rest of the small resort, offers wifi, (no video streaming) and a 500 strong DVD library, perfect for a rainy day, (although expect no TV stations – perfect for really letting go of the outside world)

What could never be imparted in print, is the level of service that we received at the resort. It’s by far some of the best we have ever received in the world. It is genuine, caring and welcoming, and whilst the hotel tries to ask guests to forgive ‘Fiji time’ which is known across the island as a ‘slower’ way of life, the staff are fast in responding to requests, and genuinely enjoy what they do.

In summary, We had such a difficulty in leaving the place after 10 days there, we have already planned to return and we recommend you do the same! No wonder it keeps winning awards, and after being sung the traditional farewell song of the Fijian culture, that some people have returned no less than 14 times. Maybe this really is a little piece of heaven on earth. 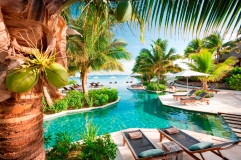 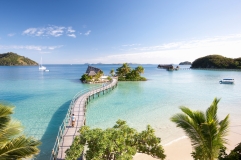 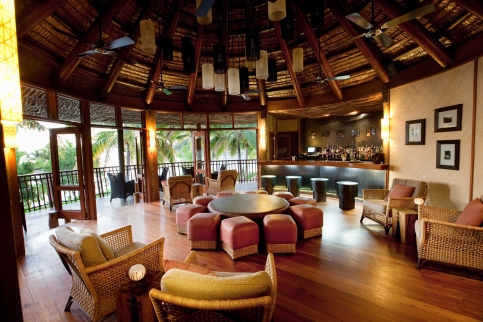 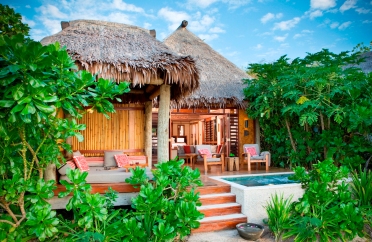 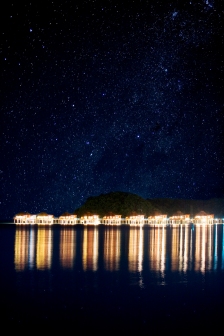 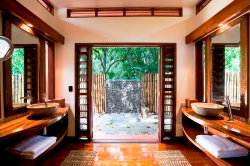 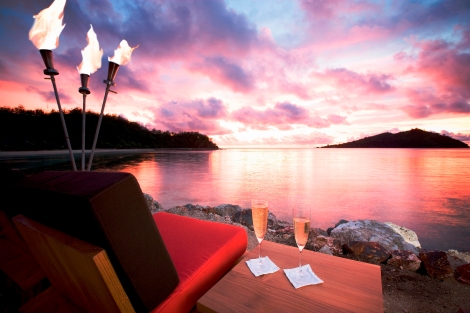 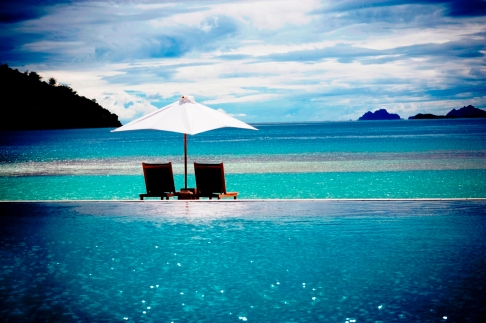 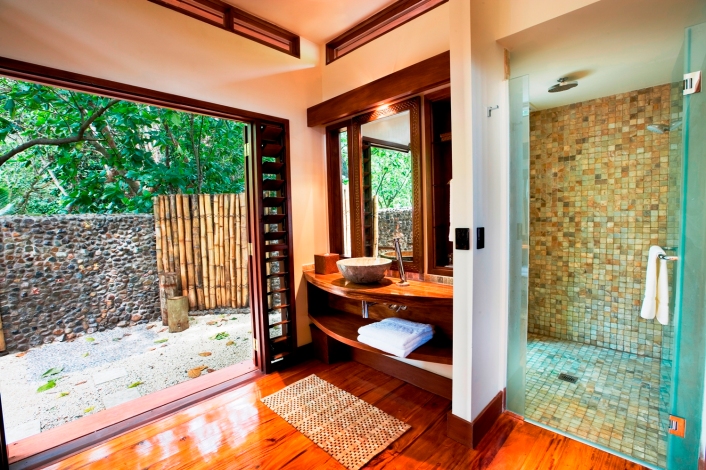