Lufthansa have been working on a new premium economy product for the past few years and have just announced they are to be introduced into their long haul fleet. Seen globally as a huge success since the invention from Virgin Atlantic, in 1992, many airlines now offer a class between economy and business class, as business classes and first classes now are virtually the same product, but still leaving a big gap between economy and the lie flat business class seats.

Lufthansa’s new Premium Economy Class can be booked from May onwards and will be available from November 2014, initially on the Boeing 747-8. “Our Premium Economy Class will create a completely new travel experience that combines affordability with greater comfort. The seats offer up to 50 per cent more room than Economy Class and will position us in a premium segment within the international competitive environment,” said Jens Bischof, the Member of the Lufthansa German Airlines Board in charge of Sales, Product and Marketing, during the presentation at ITB in Berlin.

The new seats were especially designed and produced for Lufthansa, They are up to 3 centimetres wider than the normal Economy Class seats. A centre console between the seats with an own wide armrest for each passenger provides greater privacy as well as approximately 10 centimetres more room at the side. Making them closer to Virgin Atlantic’s and Air New Zealand’s more premium version of the cabin class compared to ‘generally bigger seat pitch’. The back rest can be reclined further and the seat pitch is a significantly more spacious 38 inches, or 97 centimetres. As a result, passengers have around one-and-a-half times as much room as Economy Class. The head rests can be set to the exact height desired and folded at the sides for added comfort and support.

Lufthansa’s Premium Economy Class is located within the cabin as a clearly identifiable separate compartment between Business and Economy Class. It has a high-quality design and contains between 21 and 52 seats, depending on the aircraft type. Installation of the new travel class, which is to be carried out on a gradual basis, sub-fleet by sub-fleet, will start this autumn and finish in summer 2015. The new travel class provides greater comfort and enhanced service. Ticket prices in the new Premium Economy Class will be closer to Economy Class than Business Class – a return flight across the North Atlantic or to Asia will cost an additional EUR 600 on average.

We are a big fan of the all important premium economy product, recently experiencing Cathay Pacific‘s and seeing the big benefits compared to economy class! The price point of an extra 600 Euros per return trip compared to economy makes sense and is positioned perfectly for a premium economy product. We like the attention to detail, the extra space and the seat partition, although our one issue with this, (through travelling with Virgin Atlantic’s premium economy) is that without the seat partition, on a more empty flight it’s easier to recline and enjoy the extra space of the neighbours seat, whereby those in economy, on an empty flight could raise all the arm rests and basically sleep on the seats in a pseudo flat-bed.

But this is also about service, the use of porcelain tableware in particular will make a noticeable difference. Passengers in Premium Economy will also be able to take a second item of luggage with them at no extra charge, and as of April, all passengers in Lufthansa will be able to enjoy twice the entertainment as the airline has just announced they are ramping up the amount of films onboard. Those who really want to be spoilt can also purchase lounge access for as little as €25. 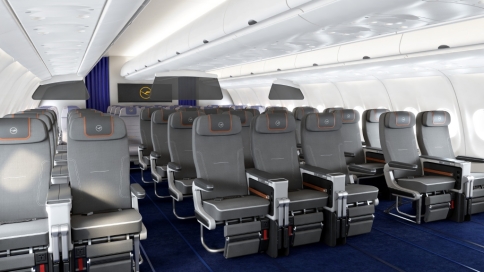 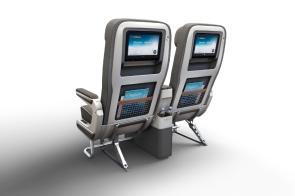 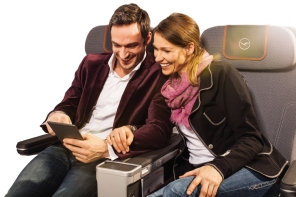 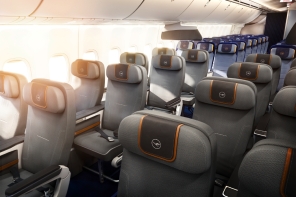 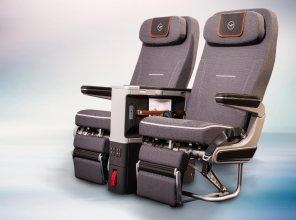