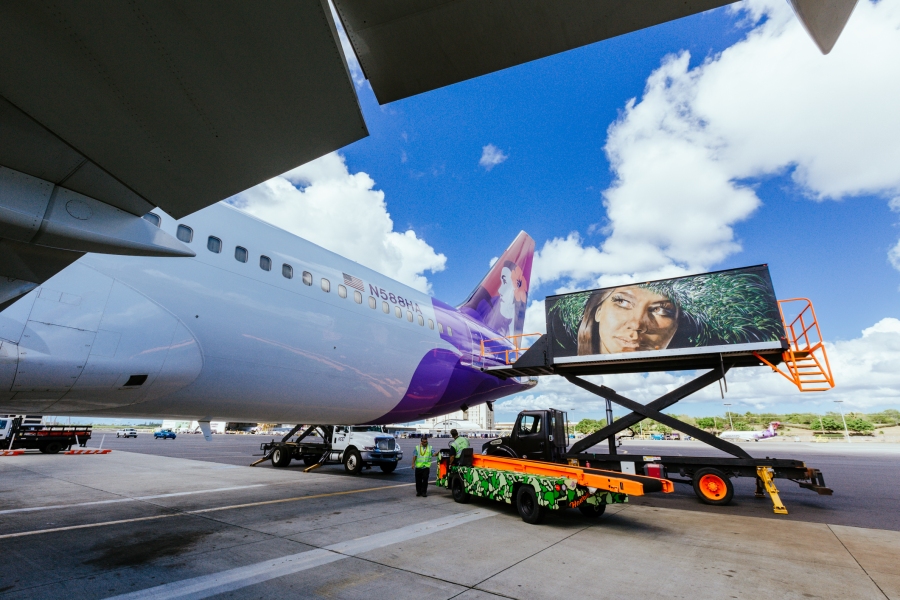 Hawaiian Airlines certainly have been busy with their paint brushes and spray cans recently. The airline this year launched their O’hana by Hawaiian, with aircraft liveries designed by famous Hawaiian resident Sig Zane and his son, and have also recently launched their awesome co-branded, limited edition merchandise for the Polynesian Voyaging Society’s worldwide voyage.

But their latest project, brings a whole new perspective on the airport experience. As a pilot, you tend to forget that the heavy machinery that operates around the aircraft on an airport apron are dreary, old, plain machines, that have very little branding or connection with the airline itself. Hawaiian’s was never going to fall into that category, with mainly bright purple vehicles darting around Honolulu airport, however, their latest project, has catapulted their ground service equipment to a whole new level.

In a deeply rooted and considered concept, the airline commissioned PowWow! to take a look at their trucks, push backs and baggage belts to give them a new lease of life, in a bid to increase awareness of the multitude of workers that busy themselves around each aircraft in getting it ready for departure.

“Hawaiian Airlines’ focus on safety is pervasive, and we wanted to bring a project to our Honolulu operations that manifested the pride of our employees, our focus on safety, and the spirit of our island home.  We teamed up with artists from PowWow! Hawaii and Fitted Hawaii to custom-paint ground service equipment at Honolulu International Airport to reflect those themes.” says a spokesperson from Hawaiian Airlines on the project. 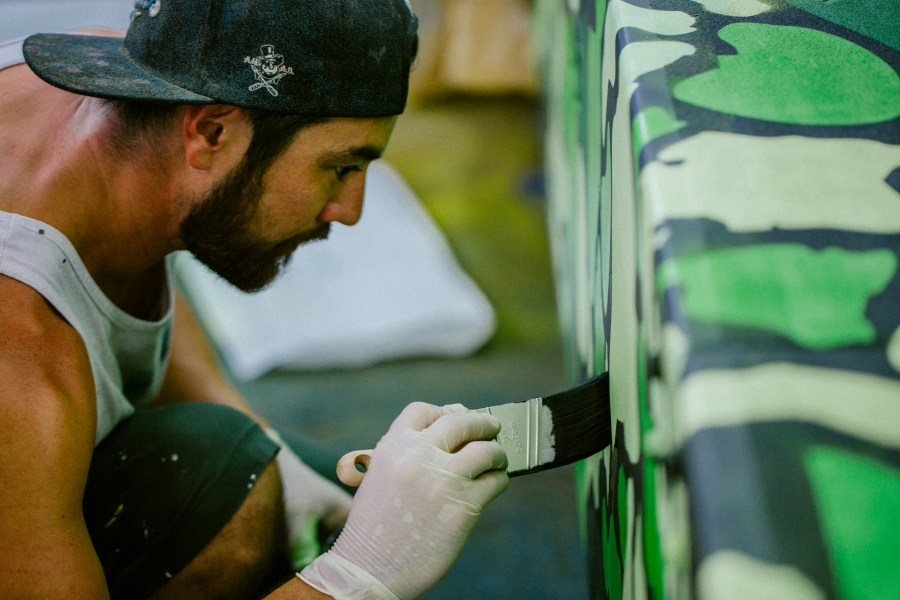 Kamea Hadar and Jasper Wong, who co-direct PowWow!, worked with a team of local artists and designer Keola Rapozo of Fitted Hawaii to cover the vehicles in an ‘island camo’ theme—a camouflage-inspired motif made up of the silhouettes of the Hawaiian Islands. The camo, with its interconnecting islands “intends to emphasize how Hawaiian Airlines brings all of the islands closer together and encourages visitors to experience each one for its specific charm.” They added reflective orange accents, hand-painted murals and lettering to create a look representative of modern Hawaii’s rich design culture. The new look sends a message about the visibility and safety of our operations, while bringing some edgy Hawaii design to our employees and guests at the airport. 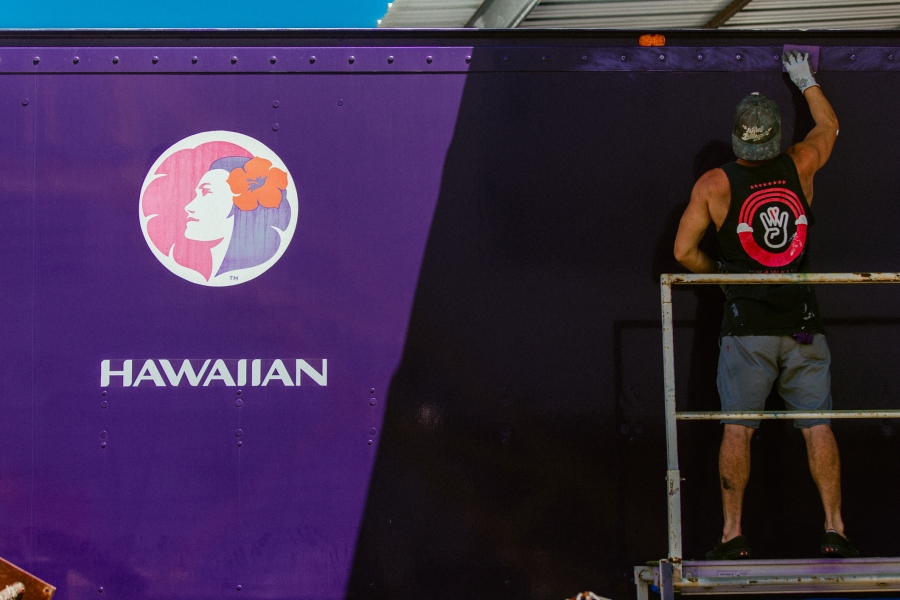 The results are amazing. Huge billboard artworks adorn service vehicles, and Hawaiian urban camo makes the entire ground equipment seem contemporary, youthful and fits the history and nostalgia of the island chain perfectly. The fun elements in orange and green, sit perfectly against the pink and purples of the aircraft themselves, making the connection between ground and air buzzing with colour and life. We think more airlines should look at their ground equipment, after all, most passengers who get onboard an aircraft, do so by an air bridge, and with aircraft noses pointing towards the terminal, liveries can often be overlooked. Most passengers, whilst sat on the tarmac, having nothing more to do than look out the window. The vehicles on the apron are prime branding opportunities often overlooked.

But, those keen spotters make think that above you are looking at a Pualani on the lift vehicle, and you are sort-of right. The portrait is of Bailey Rapozo, Ola’s (one of the artists who designed the Island Camo pattern) wife. It is meant to be an interpretation of the Pualani, but instead of a flower she is actually wearing a Haku, giving the feeling that it is a special occasion. “I painted her looking over to the left so that she not only interacts with plane, but looks at the tail where the other Pualani sits.” says Ola Rapozo.

We are really sad to say, these fantastic, intricate and hand painted designs, currently all driving around Honolulu Airport will only be around until October 10th, so if you want to see them for yourselves, you know you will just have to jump on a flight with Hawaiian this month! 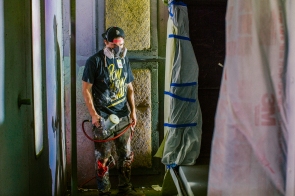 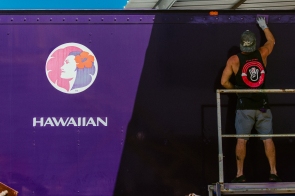 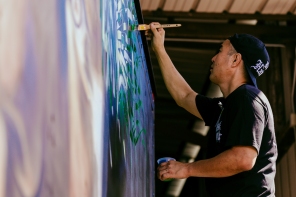 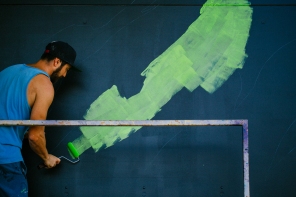 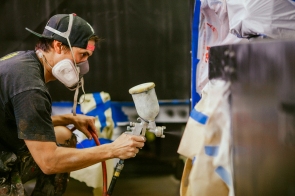 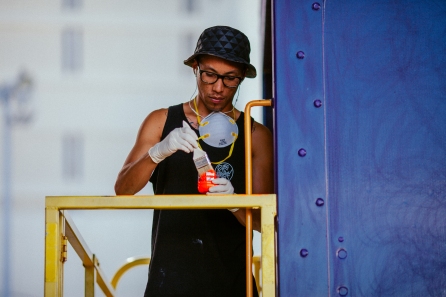 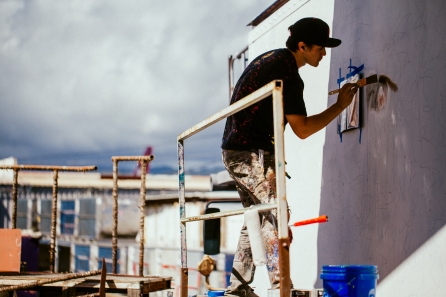 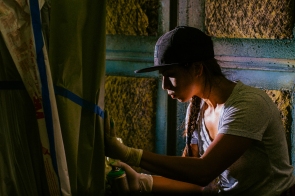 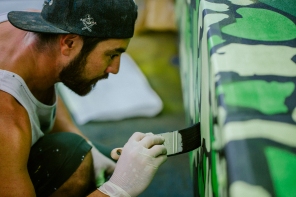 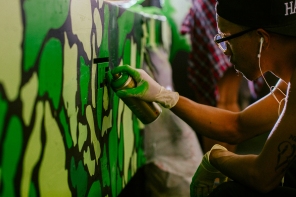 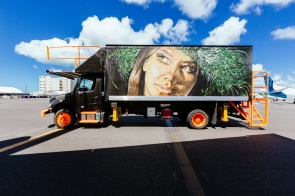 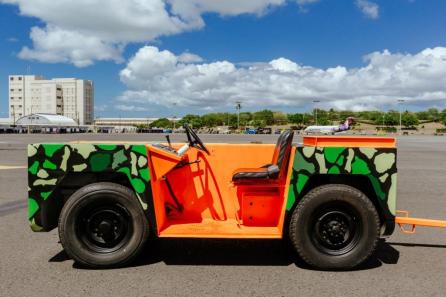