British Airways Are Keeping Us Guessing

In a new wave of patent submissions, British Airways are perhaps going back on their original herringbone concept that they submitted last year. The patent, filed last year but only recently published, shows off a wave of innovative seating arrangements. Whilst most of the patent references the seating configuration rather than the seats themselves, there are some interesting lessons to be learnt here.

The forward/rear concept isn’t necessarily getting the boot. In fact, they may be embracing the seat layout in economy / premium economy (as shown above), although we can’t fully understand how that would work in a high density format, with more gymnastics being required if you weren’t on the aisle compared to normal – meaning this is more an exercise of design rather than a look into the future of passenger comfort.

As for those in Club World, the new patent seems to show a developed seat design, similar to those found on Korean, JAL or Oman Air, with a seemingly clever homage to the B/E Aerospace Apex seats. Addressing the need to offer all passengers in a business class cabin direct and unobstructed aisle access, the carrier has managed to keep its iconic forward/rear facing Club World thrones. 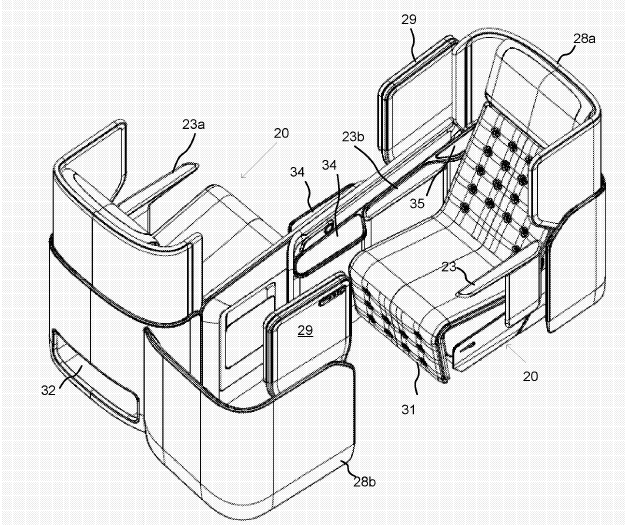 The new designs will have to sacrifice seats to accommodate the new design, as the bed length is remaining at 183 cms long, the same as it is currently, meaning it is slightly less compact. Unlike the previous patent however, this plan would mean that business class passengers are still 8 across in wide body aircraft (or 7 in slightly smaller wide bodies such as the 787) which compared to other carriers is very tight, and seat width is coming in at 20″ wide, but not offering the increased personal space found in Herringbone seats or those found in the forward / rear facing seats of Etihad’s Business Studios.

We should point out, that this patent covers a wide range of ideas and concepts, and most refer to the seating configurations and how they fit in the track systems and the weight distribution on the flooring, so some of these details and ideas may never come to fruition.

And what of this diagram. Could this be plans for a Lufthansa meets Singapore Airlines First Class Suite? The low detail and lack of clear explanation may mean it is an avenue they aren’t going to progress, but the fact the diagram exists means it is a design that British Airways have considered.

Natural conclusion? Will British Airways be radically changing passenger comfort as they did at the beginning of the millennium? Probably not, and to be honest, we wouldn’t expect radical shifts in passenger experience for decades to come. Will BA finally end its forward/rear facing seat design in Club World, that’s a little more unclear, and will no doubt be based on passenger opinion and consumer testing. What we do know is that BA is tinkering away, creating something new, and it is only a matter of time before we see something new rolled out from the UK.

2 replies on “British Airways Are Keeping Us Guessing”