Best for: Leisure Travellers who pick up a rash from low cost carriers.
Most likely to sit next to: On this flight, most likely business executives using their airmiles to ship themselves and their entire family (including Nanny) for a luxury break somewhere more off the beaten track
Business or pleasure: This is entirely a leisure route, and even though over 3hours 30 minutes offers little more entertainment than a magazine and a surly cabin attendant.
Routes: BA has an amazing network of flights, all over the world, some less glamorous than others, but the difference in quality between Gatwick and Heathrow routes is noticeable.
Frequent Flyer Programme: Avios or Executive Club. Fairly decent, but not a huge amount of availability. The trick is to go with a route that has high frequency or book early!
Best bits: This is tricky, possibly the 2 x 2 seating in the business class cabin, dining wasn’t too bad.
Worst bits: Heaps unfortunately, service, product, delays, ageing fleet.

Well this was an interesting trip. Originally booking a week before the flight, it was fair to expect high prices for the trip, what was unexpected is that the business class cabin was cheaper than economy. So the perfect excuse to try out the Club Europe cabin. After booking in the car with a valet service at the airport, it was a short hop to the check-in desks, situated in Zone A of the North Terminal at Gatwick, London. The airport itself on the departure side has had a face lift since it’s new owners have taken over, and there is a great sense of space.

The check-in desks for First and Business Class travellers for BA has a bit of a designer element to it, with wooden veneered panels and black leather seating and cloud-like lighting to enhance the experience, however, it’s more of a token gesture, than actual practical space. The check in process was fairly straight forward and with no queue, lasted less than 2 minutes. 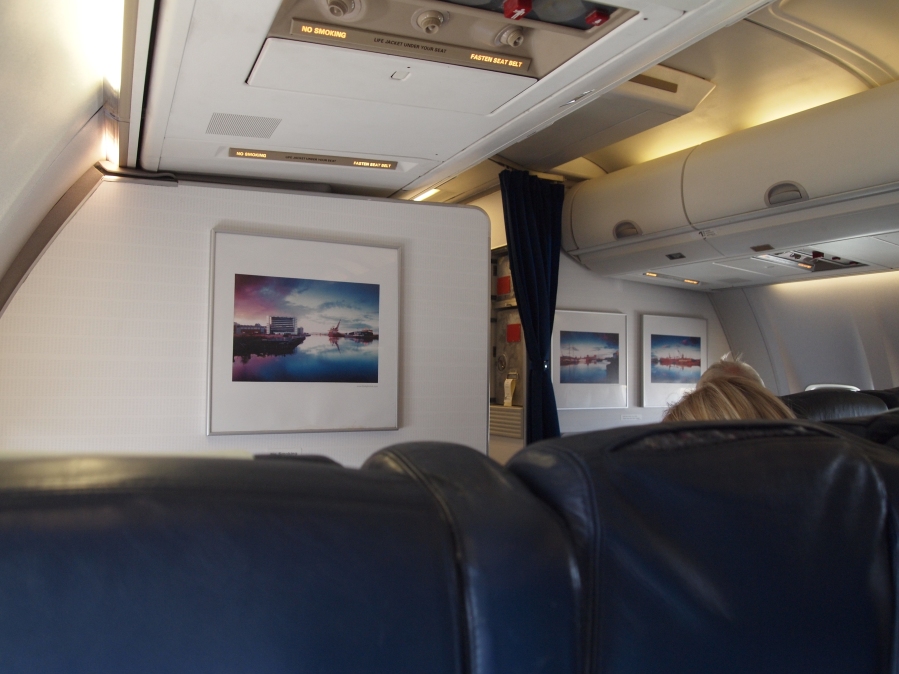 Being directed through the premium security lane, meant we were airside within 10 minutes from the car. The lounge beckoned, and is by no means small, but it’s very basically furnished, no where near the designer feel of the Heathrow incarnations. It’s not a lounge I would want to spend more than an hour in. A few magazines were on offer, along with a couple of monitors to check the status of your flight. Sadly, the flight was delayed on the screens by 30 mins. So enough time to sit down, enjoy a couple of sandwiches, which seemed fresh, a few bar snacks and helped ourselves to the free spirits, mixers and soft drinks. Here’s a tip… Champagne is available in the lounge, you just need to ask for it. Also, weirdly, the first class lounge and business class lounge are connected via the toilet facilities, meaning it could be quite easy to slip through to the first class lounge unnoticed.

When at the gate, we still had to wait 5-10minutes, one of the downsides of no announcements for boarding, but once onboard, it was time to settle into seat 3A.Whilst wearing a jacket, I had to ask to hang it up, after waiting almost 10 minutes in the seat. No pre-departure drinks were offered, and I am unaware if that is normal procedure or due to the fact the catering was still to be loaded. A further 45 minutes passed before the doors were closed and we were pushed back, the captain giving the excuse due to the Thunderstorms earlier in the morning delaying all the services at the airport. Whilst I know this is true, as a pilot, I know the limit of the disruption this would provide, and 6 hours later, the effects should be minimal if nothing at all.

The seat itself was spacious width wise, but very little legroom, and the seating was showing it’s age, and no way is representative of the images British Airways use on their website. It’s not surprising they are scrapping the 737 fleet this year. In a lot of ways, the aircraft was less pleasant than flying on other Irish Low Cost Carriers.

Once airborne, the service was OK, but the product was fairly average, drinks were pretty standard, and champagne and wine served in mini screw top bottles, rather than from a normal bottle, and the one cabin crew for 14 passengers, was just about bearable. The small intimate cabin though was overrun by two main families of about 5 people each, so we felt a little bit surrounded by loud talking and lots of motion around the cabin. I can’t help but feel some inflight entertainment would have settled most of this down, and made the experience for everyone a little more enjoyable.

The magazines are OK, some good content and the design seems very Shoreditch, but nontheless, an enjoyable read. Once landing, we disembarked and the luggage was on the conveyor belt within 30 minutes of touchdown. Fairly decent for Marrakech Menara Airport. Obviously, no arrivals lounge, but a VIP car was ready to take us to our hotel, Kasbah Tamadot.

I left the flight feeling disappointed, if I had kept with an economy ticket, I could have excused the experience, but flying business class and not even being offered a newspaper (overhearing ‘no sorry, you needed to pick one of those up in the lounge if you wanted one’) isn’t what I would expect from an airline that used to have the marketing slogan ‘The world’s favourite airline’…