We Only Just Discovered This Gem, But It Is Still Amazing

Whilst we are currently sat in the brand new Korean Air lounge in Los Angeles’ Thomas Bradley International Terminal (TBIT) that’s been open for only 4 weeks, we came across a snag. We were advised that we can’t showcase the lounge itself by taking any photos, which in swathes of Blues and natural stone materials is a clean, sophisticated and minimalist lounge (no bells and whistles), perfect to letting time roll by waiting for you flight. So whilst we will write about the lounge when we can get our hands on some images, something else caught our eyes.

Now, some of our partner sites have already covered this, but watching the giant screens that the lounge looks out onto for the past 30 minutes, we are mesmerised and captivated by the LED installation in the main foyer of the TBIT concourse. “The Integrated Environmental Media System” (IEMS), launched when the terminal opened in September 2013, has been designed to create both an unprecedented passenger experience and a new source of non-aeronautical revenues for LAX. Developed by MRA International in concert with Los Angeles World Airport’s (LAWA) executive team and a variety of media partners, the IEMS built within the Bradley West terminal architecture offers the first corporate sponsorship programs in a U.S. airport. 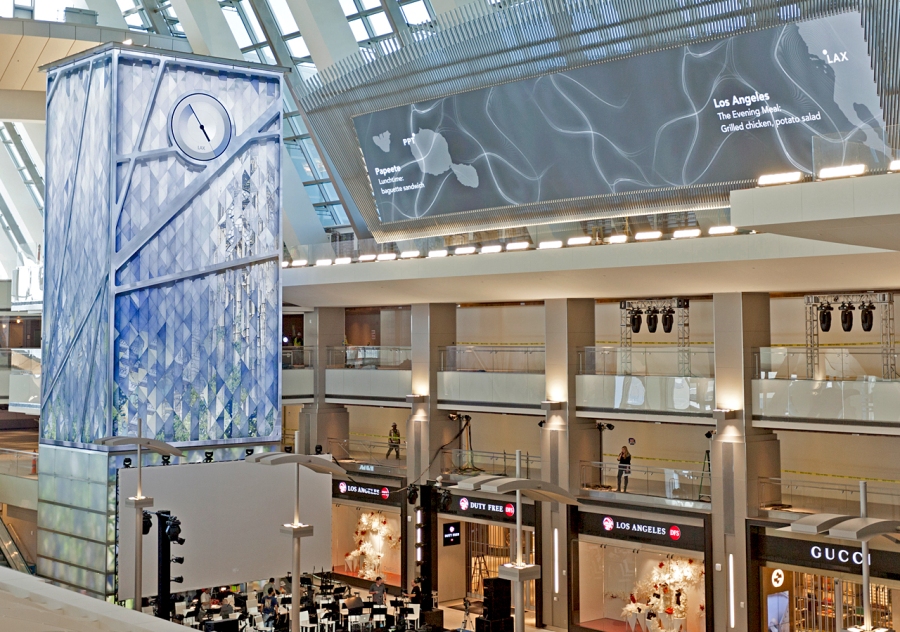 Roughly translated, these 7 multimedia environments are staggering in scale, complexity and beauty. The interaction between each of the screen elements is seamless and magical, and inspires serenity, excitement and can even evoke emotion. TBIT, whilst still holding on to it’s old shell of a building, is slowly shedding off a historically dull terminal, and injecting creativity and inspiration that would make Asian airports stop and stare.

Interestingly, this technological and aesthetic leap forward inside the TBIT terminal fills us with mixed emotions. On one hand is this fantastic modern image of a terminal experience, yet it is surrounded by a complicated maze of archaic terminals at LAX, which have been renovated, not re-imagined. A bit like Alice in Wonderland, this global hub is becoming a beautiful door into the US for many international carriers and their passengers. But the illusion will be shattered for those connecting on to continental and regional flights who will suddenly realise this gem of a terminal is one in a thousand, as the rest of the airport terminals in the US now have to play catch up.

Do yourself a favour, give yourself an extra 10 minutes at the terminal, take a seat, or a stroll, and fully immerse yourself in a media collaboration that is creatively breathtaking.

2 replies on “We Only Just Discovered This Gem, But It Is Still Amazing”