Asiana Introduce A Magical A380 Experience

We weren’t fully sure what to think of Asiana’s new A380 interior when we saw their presentation, however, secretly, the big kid inside us absolutely loves what they are doing. It’s like a Disney World of the skies for all ages, but more on that in a second. Firstly, lets take a look at the design.

Asiana have created a beautifully appointed first class on their lower deck. 3 rows of 1 x 2 x 1 private suites with ‘softly closing’ doors is the stage, and the finishing is excellent, with a mix of cool-steel and neutral tones no top a mottled grey carpet. This is closer to the interior of a luxury car than aircraft. On the ceiling, expect a little magic, as when the lights go down, the stars come out to play. Inside each suite, expect enough space for two to dine, and when it’s time for bed, the suite turns into a 80″ large bed, almost big enough for two, with a thick duck-down duvet to drift you off into sleep. We like the simple touches, although nothing new, such as privacy lights, and a variety of storage areas for your belongings.

As for entertainment, a huge 32″ screen (the world’s largest) is at your disposal, with touchscreen video handsets with an intuitive interface, making simple work of navigating the library of movies and TV shows at your disposal. Naturally the seat can be adjusted in more positions than a Yoga Instructor and with their dine-at-any-time service, it’s possible to eat whenever you like. 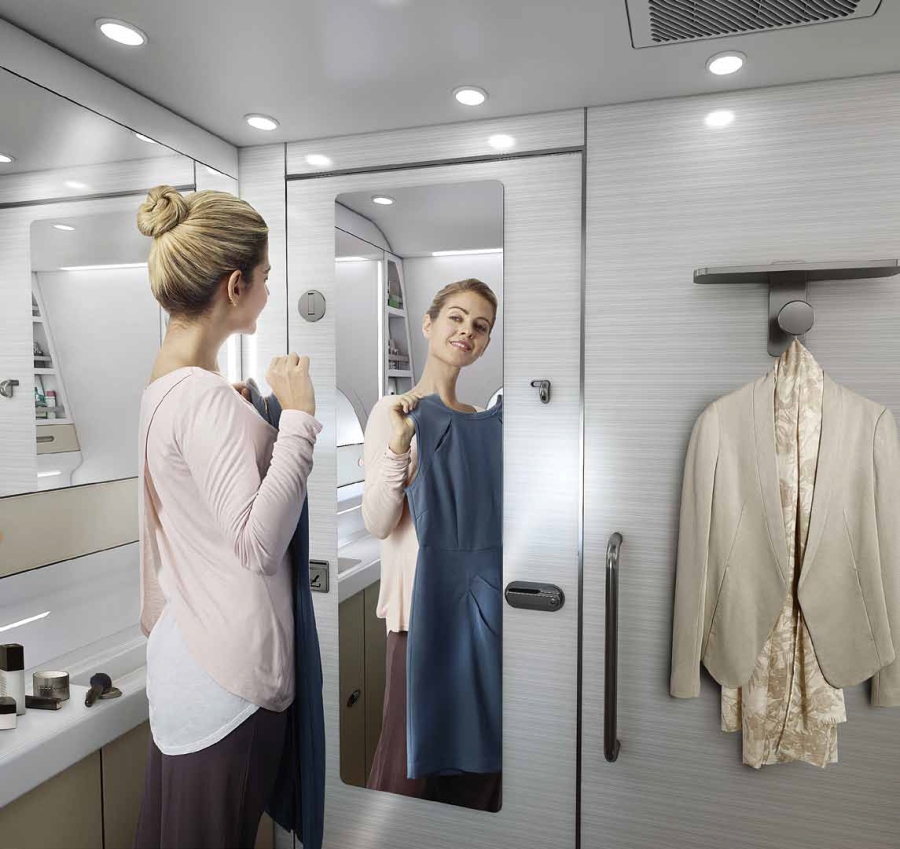 For those wanting to stretch their legs, they can either head to the oversized first class toilets, or head on to the upper deck, where the front area is turned into a relaxation area (where Emirates situate their onboard showers, and Etihad places their ‘Residence’), where you are able to relax in a little more space with a companion. 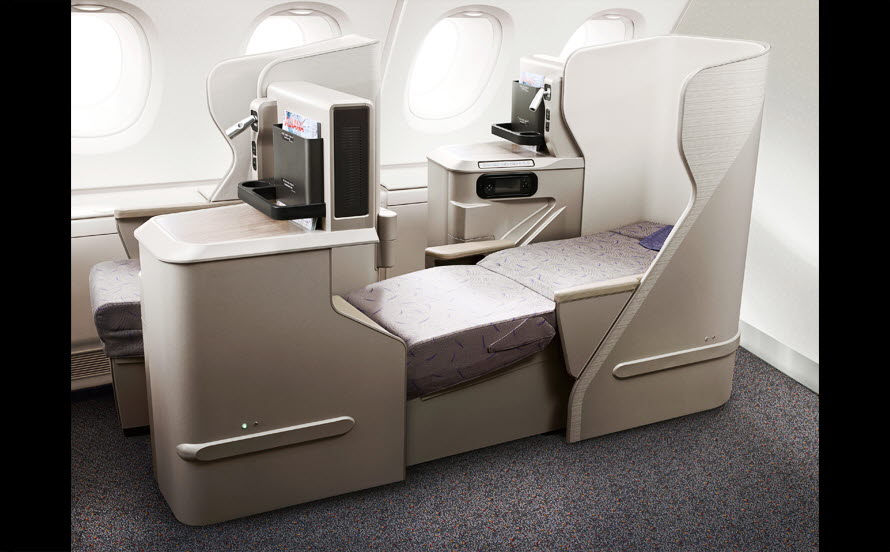 For those who are travelling in the airline’s Smartium Business Class, expect a similar experience to what the airline already has for this cabin class. A 1 x 2 x 1 configuration, where every seat has aisle access and there is a mix between solo seats and seats next to each other. Each seat is slightly angled for a little more privacy, and unlike some business classes, all the seats face forward. In total, there are 66 seats, all situated at the forward portion of the upper deck of the A380. 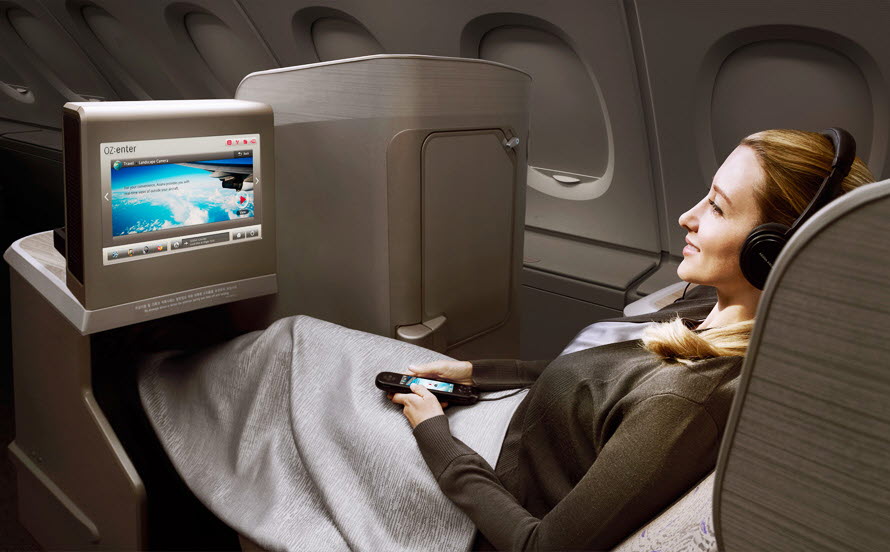 Naturally, every seat turns into a fully flat 74.5″ bed and has a variety of devices including a fully retractable armrest to give you a little more space. For those wanting the most privacy, the seats by the window offer a great uninterrupted sleep, without the chance of being knocked and bumped by passers by. For those looking for entertainment, you would be pleased to know there is a 15.6″ HD screen, also with a touchscreen controller. The advantage of this staggered seat system is each seat gets a lot more space, with a side table area for storing drinks or personal effects, whilst the fully adjustable table is great for working on or dining.

Business class users also have access to the lounge area situated at the front of the upper deck, and also The ‘ASIANA380’ First Suite and Business Smartium cabins feature lavatories with separate dressing rooms to allow wardrobe changes with ease.

Most likely to save weight, the economy class seats are 1″ slimmer in design. The advantage of this, is that the seats now offer 1″ extra seat pitch (34″), which on a long flight between Asia and the US, can make all the difference between a comfortable flight and a terrible one. In the spirit of adding a little extra space, try to grab the window seats in economy on the top deck, as they feature personal lockers, like that in the business samarium class seats, for extra storage, and a shelf to rest items on. 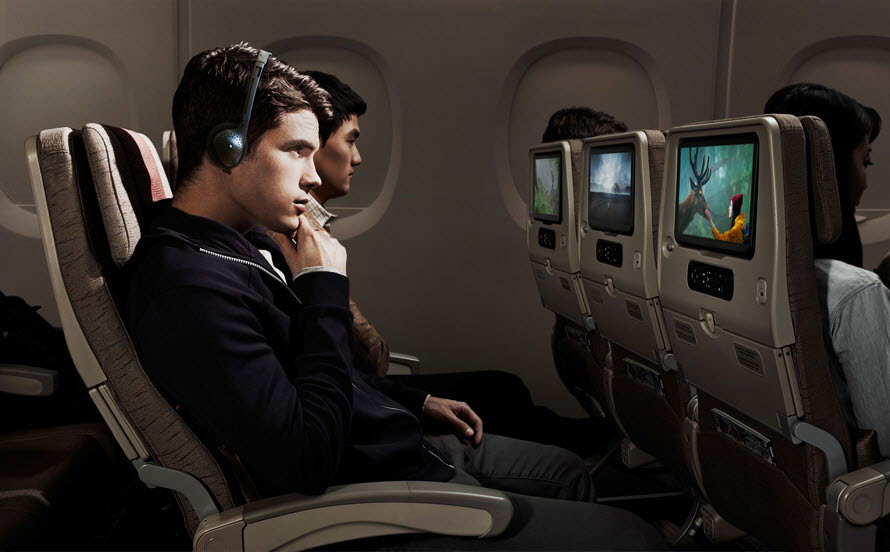 All seats also come with a footrest and folding table, for a little more space. Whilst this little grown up guy (above) seems engrossed in his kids movie (admit it – we all love to secretly watch movies on flights that we would never do so in cinemas) the reason may be due to his super-large 11.1″ HD Widescreen he’s watching it on. Yes no more fuzzy films where you have to guess what’s going on. We love that the airline is making the experience premium in all cabin classes.

Now for the magic

No, we are serious. There is magic on-board, done by your very own wizard (check the date, it’s not April 1st) and if that’s not your thing, how about a Tarot reading? Nope? Still not amused? Get your creative juices going with some chalk and chalkboard, or be entertained by ‘Delighters’ who put on fashion shows of Korean traditional dresses and showcase wedding ceremonies during the flight. There is even cookie baking, balloon art or costume play for the little ones. We couldn’t make this up if we tried. For the not so little ones… there is a barista service and sommeliers and even a cocktail service, presenting cocktails specifically chosen by the route you fly. For the ladies, there is even a beauty service, where make-up can be done for you. 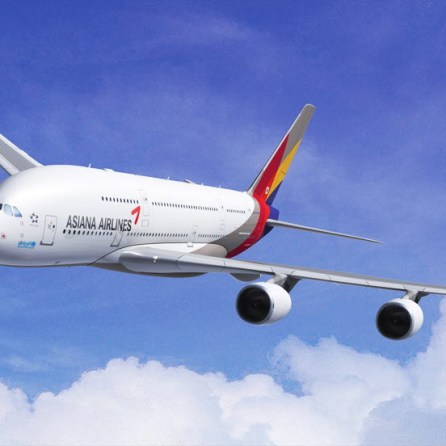 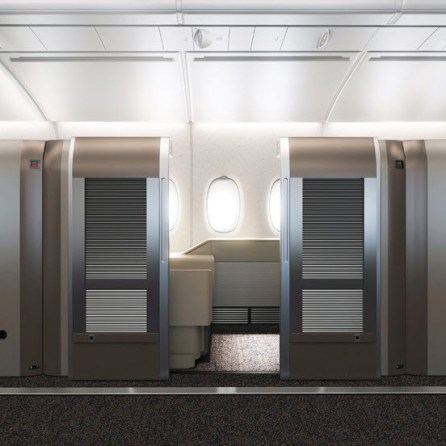 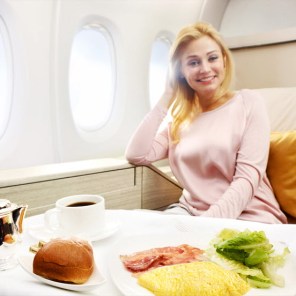 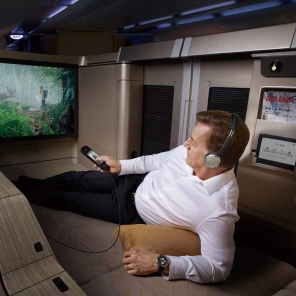 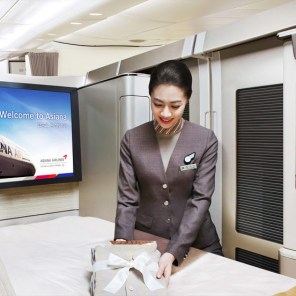 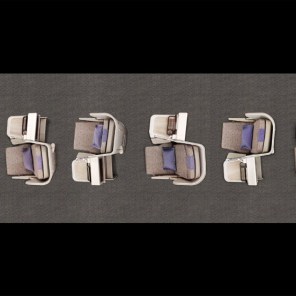 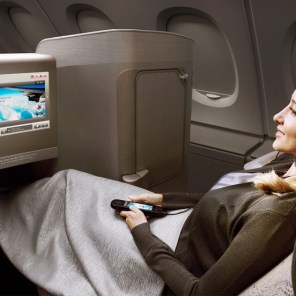 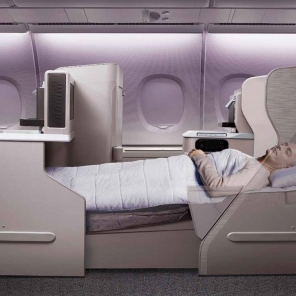 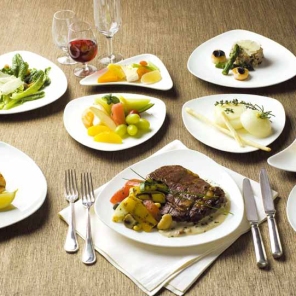 We did warn you it was like a flying Disney-world. It really is no surprise they have won so many awards over the years. The Asiana A380 will first commence on routes between Seoul (Incheon) – Hong Kong and Tokyo, followed by Bangkok and Osaka, before heading out on the daily Seoul (Incheon) – Los Angeles route from August 15th 2014 onwards.