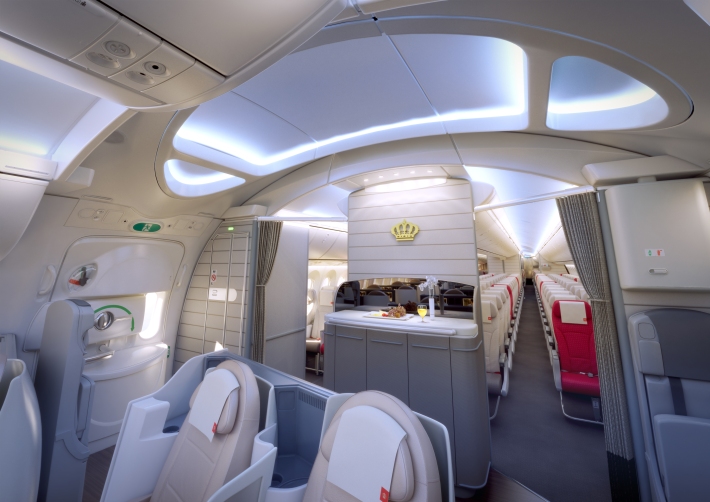 Royal Jordanian, famous for their striking charcoal coloured livery, have recently received the first of their 787s, in a thedesignair.net exclusive, we reveal the images in full high resolution for you to salivate over. What is evident, from entering the aircraft is the sense of space. Royal Jordanian have been one of the first carriers to opt for the large, cavernous entranceways that was part of the original cabin designs from Boeing, to create a sense of space and height, that the 787 really does offer. On boarding, you will note the calm cool colour palette, of soft muted greys and creams, with accents of the airline’s red dotted around on seats.

At the entrance is a simple golden crown, the only major part of noticeable RJ branding inside the aircraft, but it very quietly and proudly sits where all passengers can see it. At the entrance as well, is a small bar top which is most likely for mid flight snacks, sadly, only available for those in the airline’s Crown (Business) Class.

We are loving the business class onboard, and some may find it familiar looking, that’s because it’s pretty identical to that found on some of Delta’s fleet, as well as onThai Airways’ and United’s 787s. The reason we love it, (apart from the awesome red seat belts) is because what it has done to the carrier. It is now offering a much higher quality product, and matches the product found on the ground in Amman, where Royal Jordanian offers a large, and architecturally beautiful space for its business class passengers. Hopefully, we will see this product across the entire network soon enough, to replace the older style large recliners and almost lie flat beds – which seems to be the plan, as the Chairman of the Board/President & CEO Nasser Lozi stated “The new addition [of the 787] to the fleet is the first of five that will join the RJ fleet during this year as part of the company’s strategic plan to modernize its long-range fleet of aircraft, replacing the currently operating A340s and A330s.”

Onboard, the 24 business class seats found on the 787, offer 60 inch seat pitch in a 2 x 2 x 2 configuration, but due to their slightly angled nature, offers increased privacy, and bed length. The seats turn into fully 180degree flat-beds, with a bed length of just over 78″, plenty comfortable for most passengers. All the seats offer connectivity, and power and USB sockets can be found at each seat. The B/E Aerospace Diamond business class seats themselves have 21 inches of seat width with the arm rests down, and offer a larger 17″ screen filled with AVOD.

The angling of the seats, means that the seats on the left hand side have the most privacy, as their neighbouring seats are turned to face the other way, meaning the right hand pair of seats in the cabin is slightly more overlooked. 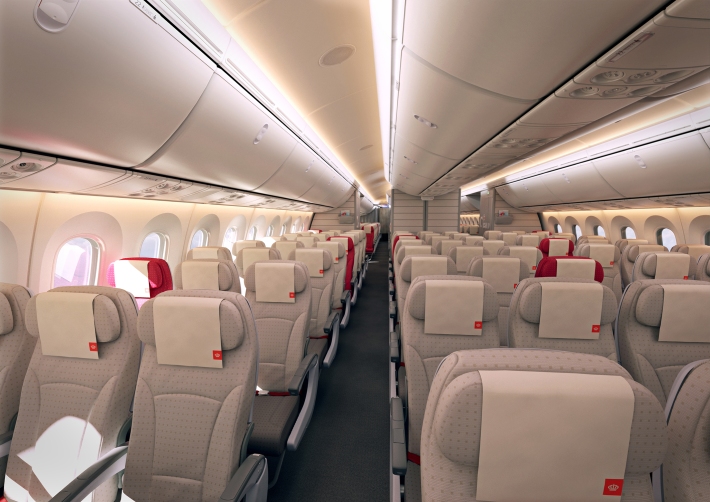 In economy, there is still reason to jump up and down with joy, there are slightly less seats than on their competitors, and whilst still in a 3 x 3 x 3 configuration, the 4 less seats does mean more space. With mood lighting and a light airy cabin, as well as much better quality cabin air, the journey will seem a lot more comfortable. We also love their introduction of what seem to be hot seats – randomly placed, bright red seats in economy, that have no meaning whatsoever, apart from to inject the occasional red accent colour through the cabin. Visually it’s a clever device, employed by many cabin designers, to help break up the rows of seats, and make the cabin look more intimate.

All economy seats have 10.6″ touchscreen TVs with AVOD, and nicely feature a bi-fold tray table to offer more space and more practicality depending on the point in the flight. The entertainment options on Royal Jordanian’s 787 is powered by Thales brand new AVANT system, which should offer much faster loading times and processing power, along with wi-fi connectivity too. Obviously with this being a Dreamliner, the airline is proud to offer customers an improved cabin environment featuring LED mood lighting, larger windows, bigger overhead bins, lower cabin altitude and enhanced ventilation systems and reduced noise levels among other features.

We are impressed, and delighted that Royal Jordanian has continued to improve its product, and has taken steps to ensure that its new fleet will fight strong for years to come against their competitors.

Initially, Royal Jordanian will be flying the 787 on various long haul routes around its network, including London Heathrow, Hong Kong and Bangkok.