JAL today announced a new cabin enhancement for their 777-200ER fleet which would ‘raise the bar one class above in all cabin services” according to a press release from the carrier today. The brand new business class dubbed “JAL Sky Suite 777 (SS2)” will launch on the Tokyo Haneda – Bangkok route from July 2016. This comes after our announcement of improvements across the carrier’s fleet, back in January.

The new aircraft, whose business class cabin features Herringbone Business Class seats and all-aisle access in a 1 x 2 x 1 configuration will also be introduced on Tokyo Haneda to Singapore route and also the Honolulu route from the winter season.

It’s not just the front of the plane that will get the refresh, JAL will also introduce their JAL Sky Premium economy seats and in economy the seats will be replaced by their JAL Sky Wider seats, which have an increased seat pitch and a new seating configuration of 3 x 4 x 2, which while unusual actually helps to cater for a wider range of passengers seating requirements compared to the usual 3 x 3 x 3 seating found in the economy cabin. 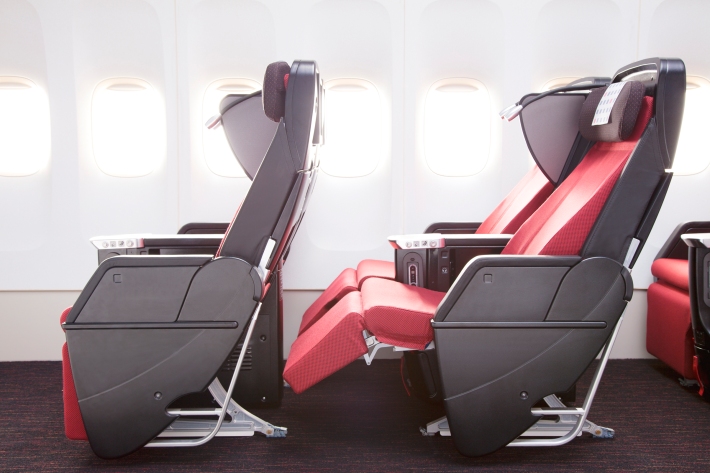 “Our aim is to deliver enhanced services and products to more customers. We have developed this new Business Class seat with highly in-flight habitability and provision of appropriate capacity as well,” said Yoshiharu Ueki, President of Japan Airlines. “JAL will be continuing to embrace new challenges, and striving to become the most preferred airline in the world.”

The Business Class seats are similar to the Zodiac Cirrus Aero seats found on Air France, Cathay Pacific and American Airlines. The customisation of the seats include a small privacy partition and customised storage for passengers. There is also a massive 17” screen for entertainment, a large increase on the current 10” screens, which will showcase a range of movies and entertainment on a brand new inflight entertainment system dubbed “Magic VI.”