Flybe, Europe’s regional airline has gone through quite a few guises over the years, however the latest livery finally gets rid of the British European colours, instead opting for a duotone approach to the livery with two shades of purple on a simple white paint scheme.

The livery is smart, but sadly does lack the punch that we were hoping for with this opportunity.

We do however love the stark, simplistic and isolated logotype that sits by the front entrance door. This is a powerful and smart approach that is very on trend.

The repaint now leaves Flybe with a fleet featuring no less than 3 liveries, and with a repaint of 10 aircraft per annum, it will take a good few years to have the entire fleet unified, and considering there was a new livery in just 2014, we could see yet another incarnation before the entire fleet is updated.

Still, the design is clean, contemporary and modern, and helps mature the brand to reflect the demographic the airline carries. If only they would update their logo to a more business-friendly design, removing themselves from the low-cost ‘fun and friendly’ typeface. After all, this airline could have a similar approach to their passenger experience as Porter Airlines, who cater for a similar passenger demographic all the while delivering it with a smart, contemporary and accessible brand image. 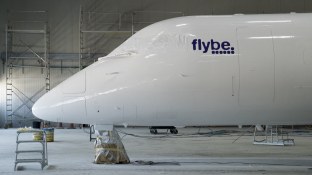 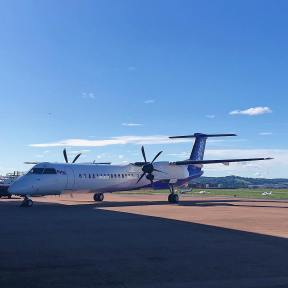 One thought on “Flybe Launches Simplified Livery On Q400 Aircraft”