Airlines Get Into Apple Watches In A Big Way 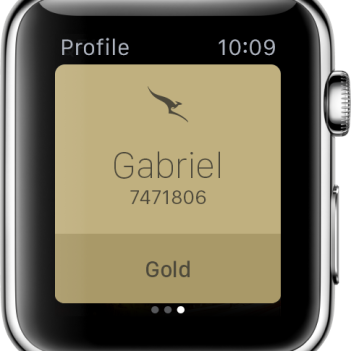 Here at TheDesignAir, we love a good app. Qantas recently announced their introduction of their new Apple Watch App, weeks before the must-have travel accessory goes on sale worldwide. Using the app, customers will receive notifications telling them of gate changes, what carousel from which to collect their baggage and up-to-the-minute information of their journey.

Qantas Executive Manager of Customer and Commercial Steve Limbrick said the airline was committed to using technology to enhance the customer experience: “We are thrilled to be one of the first Australian companies tofeature our app on the Apple Watch. Our customers tell us they love theQantas app for its efficiency and convenience and the smooth check inprocess it enables. The Qantas app for Apple Watch is the next step inmaking our customer’s journey even smoother and more efficient. If acustomer’s phone is in their pocket or carry-on luggage, any notifications that would have been sent to the Qantas app on their smartphone will alsobe displayed on their Apple Watch.”

Qantas aren’t the only carrier to embrace this new technology. It’s been a busy week of Apple Watch announcements. Delta, British Airways, Emirates, United and American Airlines have also showcased how they will be some of the first carriers to grace the app store, once the new watch range is launched.

Each app is unique to each airline, and American is offering its own innovation whilst onboard the aircraft. “The American Airlines app on Apple Watch reminds you when it’s time to head to the airport via pre-trip notifications, and provides updates for gate changes, connecting gate info upon arrival, and will notify you when boarding begins if you’re not at the gate yet,” said John Gustafson, American Airlines vice president of Digital. “Travelers can also ask ‘Where am I?’ in-flight and get real-time location information at 30,000 ft.”

British Airways customers will benefit from timely check-in and airport gate notifications, and those using the lounges at Heathrow’s Terminal 5 will receive iBeacon powered welcome messages. British Airways was one of the first airlines in the UK to utilise iBeacon technology in its lounges and uses it to provide customers with useful and timely information as they pass through the airport.

Qantas’ new best friend Emirates have also joined the list to bring more convenience to their passengers. “In today’s connected world, mobile technology plays an increasingly important role in the overall travel experience of our passengers. The Apple Watch platform allows us to connect with travellers on a more personal level by providing real time information throughout their journey,” commented Alex Knigge, Senior Vice President, Digital at Emirates. “Our team developed the Emirates app for Apple Watch with modern travellers in mind, making sure this wearable technology delivers key information, with a simple glance at their wrist.”

The Emirates app for Apple Watch is an extension of the Emirates iPhone app; it was designed as a companion for travellers, delivering dynamic and context-specific data such as live flight status updates, a review list of upcoming trips, baggage collection details and compatibility with Apple’s Passbook. They have also announced that the app will be available in English, French and German.

Whether these apps will take off, or just be a gimmick is yet to be decided, however, the innovation, simplicity and ease of use can only give these products a real fighting chance of being a huge success. We’ll let you know when we get our hands on an Apple Watch.