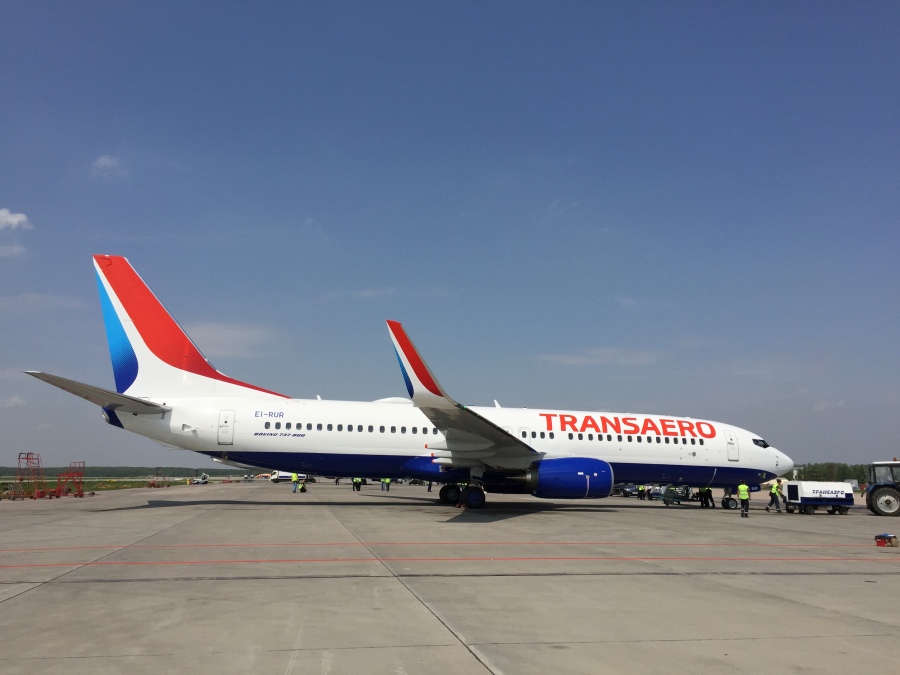 Transaero last week received their latest Boeing 737-800, which as well as featuring the new ‘Sky Interior’ and WiFi capabilities, also features a whole new look for the carrier. The modernised design reflects the previous livery which was often mistaken for Air France. Originally slated to come in last year, the carrier decided to hold off on the new brand until the market picked up again, and now in 2015, the airline is proud to show off their new colours. Inside, the carrier has opted for two classes, not including the very special Imperial Class as it showed us back in 2013.

Designed by brand consultants StartJG, they believe the new look goes beyond a simple paint scheme “Crucially the new brand is a program of change, more than just a refreshed logo. While a refined and streamlined logo visually demonstrates this change.” The developers of the new style have preserved the colours of the well-known Transaero’s logo with a view to retain the identity of the brand, which has obtained strong positions.

“Our company cares for its traditions and professional values. This attitude contributed to building up true team, even a kind of family, spirit in the company. The family is the key to the future. We want passengers who choose Transaero to feel truly surrounded by family care. Adhering to thetraditions, we modernize the image of the company. That’s why our new slogan is “To the future together.” said Olga Pleshakova, CEO Transaero Airlines.

“Transaero is a brand born of Russia, being built to meet the needs of the world’s travellers today and tomorrow. Start was introduced in March 2014. We began working collaboratively to establish a roadmap for change that would enable the brand to become more valued by passengers and more valuable as a business. With the relaunch of the brand identity Transaero has taken this opportunity in time, against a challenging economic environment, to take a confident step towards the future,” says Mike Curtis, Head of StartJG agency. “This is going to be the start of the next chapter for Transaero and an important step for the Russian airline industry.”

The new livery may look familiar… perhaps the livery was inspired by a drawing we put together back in 2013, for what we thought the new American livery should look like? That said and similarities aside, we like the new brand image of the carrier, it’s certainly bold and fresh but also more Western in its image appealing to a larger, more international audience. However the carrier has stayed true to its roots, offering the Russian language treatment of their logotype on the entry side, and the English version on the other, a visual statement of how proud the carrier is to be Russian.