Written for TheDesignAir by Zoe Belhomme | As a Hong Kong-based British expat I find myself travelling between London and Hong Kong at least three times a year. The direct route is served by 3 carriers – Cathay Pacific (five times daily), British Airways (twice daily) and Virgin Atlantic (once daily) – plus there are a staggering number of carriers travelling between the two cities via another Asian, Middle Eastern or European hub. To say passengers have options would be an understatement.

But more often than not I find nostalgia and my British sensibility kicks in when I’m searching through flight options back to the UK and so end up booking British Airways. In fact I often pay significantly more for the privilege to fly on the plane with a Union Jack painted on its tail.

So is this just perceived value or is BA really ahead of the game when it comes to one of the popular long-haul routes in the world? In the past 18 months BA introduced two new planes on the route, the A380 and the Boeing 777-300. Compared with two years ago these planes instantly makes flying with BA on this route more appealing.

I recently travelled on the 22:00 flight from LHR to HKG in BA’s World Traveller cabin (economy to anyone else), here’s what I thought of my experience.

Leaving from T5 of London’s Heathrow is a huge plus for me. The pick up/drop off areas are efficient, the terminal is clean and well laid out and even when going through security I never seem to have to queue for long. In general there is just more space so everything naturally feels less stressful. I had checked in and pre-booked my seat online so all I had to do was head to the bag drop (no queue) and flash my passport and digital boarding pass.

So far so good. I used my digital boarding pass again on the self-serve gates to get through to security. Once through the barriers I joined a short line – but nothing like the queues I used to encounter in other Heathrow terminals a few years ago. I was politely screened and my bags went through the scanner. From my car drop off to having a glass of wine at Plane Food was less than 20 minutes.

Before boarding my flight I had a look around the high-end shops. T5 is great if you want to treat yourself a handbag or dress before your flight as so many designers have outlets. The terminal also has a range of cafes, restaurants and bars designed to suit almost any budget so you can easily amuse yourself for a couple of hours . With 25 minutes to go to the scheduled take-off time my flight was called and we started to board. This was very efficient and orderly and done by rows in economy so it wasn’t long until everyone was in their seats and ready to go.

BA is in the process of updating all its fleet with new World Traveller and World Traveller Plus and these are now on both of the airline’s HKG – LHR flights. Unlike some airlines recent economy products, British Airways has maintained its 3 x 3 x 3 seating providing extra seat width, which is perfect for longer haul flights. This is the first time I’d tried the new seat and while I was slightly disappointed with the legroom, I found that the neck and back support were far superior. 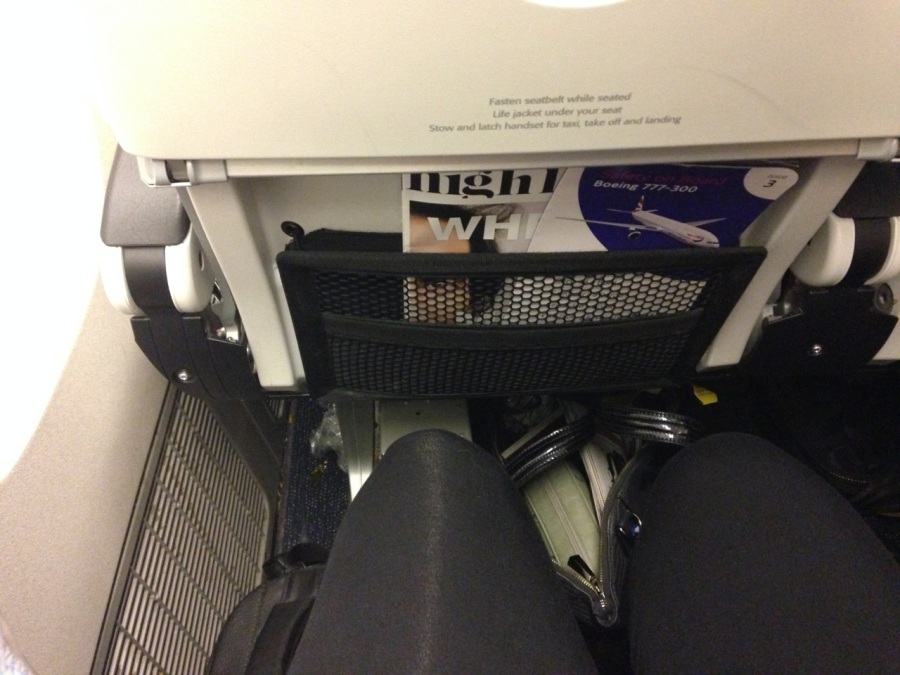 I also noticed that I was able to recline further back in the new seat and could wedge the cushion provided against the headrest, making it so much easier to sleep. All in all, for an economy product, I thought that BA’s seat was more than satisfactory.

The British Airways in-flight entertainment system has been revamped in recent years and is feature packed. There is a huge array of movies and worldwide television available (as you’d expect) and also games, music and maps. 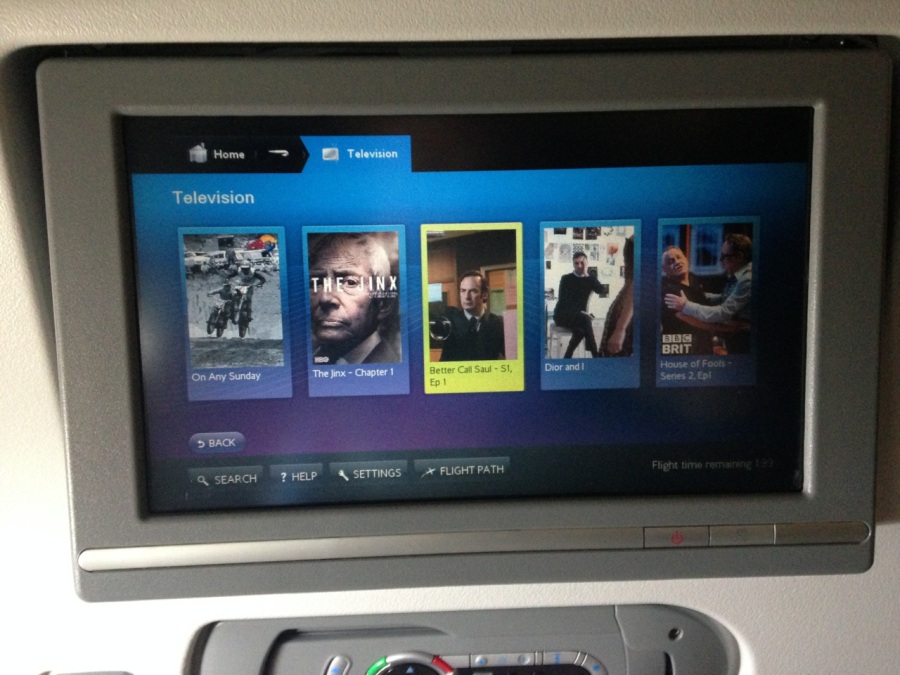 On this route the screens are much wider than before and the touch screens are pretty responsive so you don’t have to spend ten seconds prodding the back of someone’s seat to get your film to play. What I really liked was that from the moment you push back to stopping at the terminal at your destination you are able to use the entertainment system. You won’t miss the end of your movie because your earphones are being collected 20 minutes before landing. 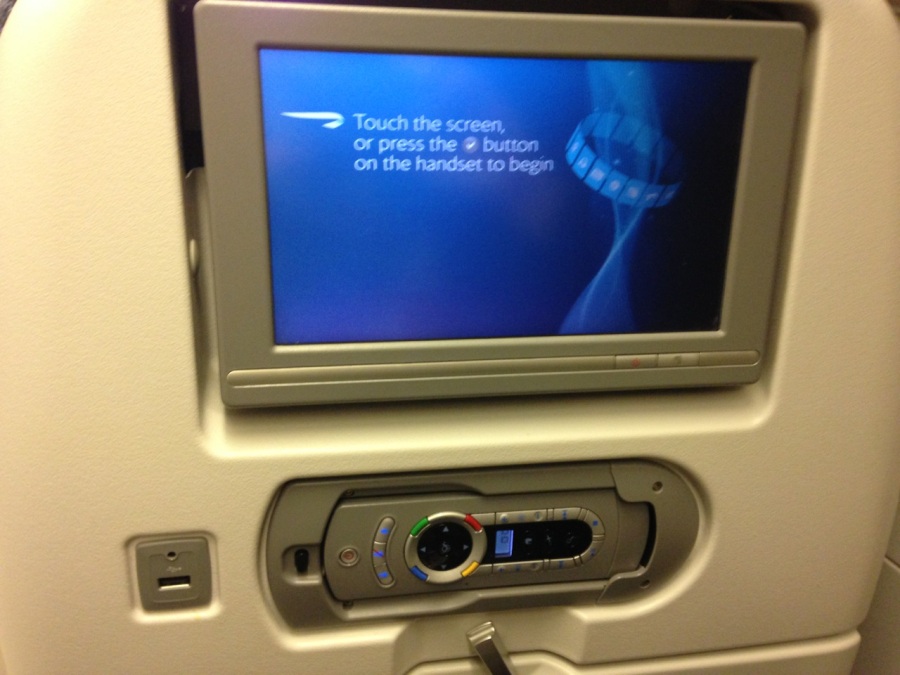 As I’d had dinner with my family before heading to the airport, I wasn’t hungry and didn’t opt for the evening meal that was served about 90-minutes into the flight. Instead I watched a film and relaxed with a Johnnie Walker whisky and ginger ale. I noticed that our stewardess came round several times in the night with water and juices – something I always appreciate on any long-haul flight. 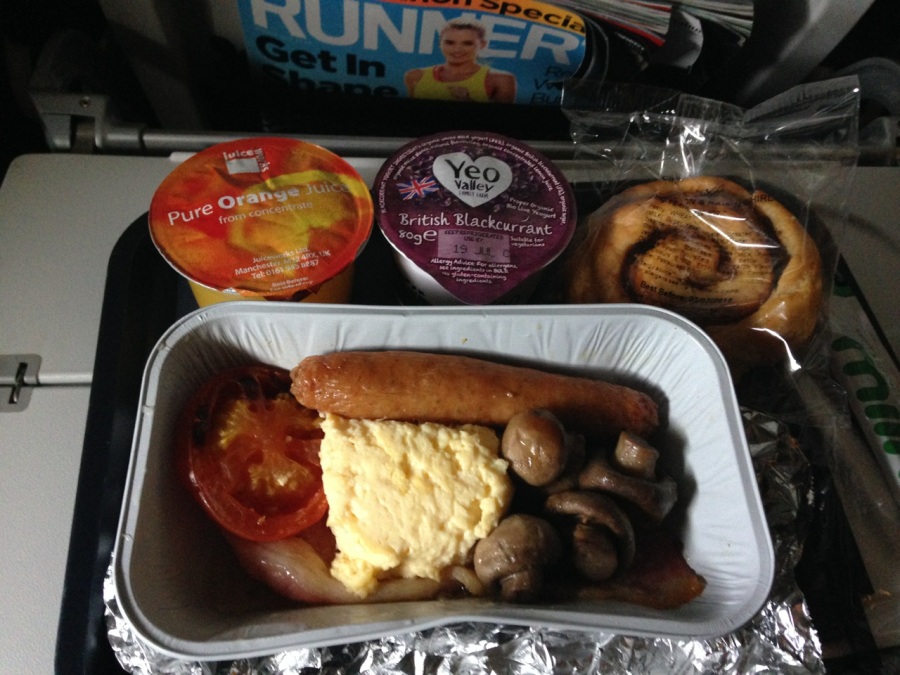 About two hours before we were due to land the lights came up and we were served a hot breakfast. By this point I was hungry so I was happy that eggs and bacon were on the menu. I was very impressed, given I often don’t eat on planes, the food was more than just edible – apart from the eggs being a little rubbery, the bacon, potatoes and tomatoes were all very tasty. The yoghurt was a good quality option but the little muffin was pretty dry so I didn’t bother to finish it. All in all, BA served up food far superior to many of the other airlines I have flown with recently.

Gone are the days where you get a full amenity kit on all long-haul economy flights, so I wasn’t surprised to only see a little plastic bag on my seat with my earphones and a toothbrush in. The Middle Eastern carriers still seem to do them but I find its overkill as on a return trip you end with four little bags which can only really be thrown in the bin. BA do give you a relatively decent pillow, blanket and also headphones.

So, would I pay the extra to fly BA between Hong Kong and London again? In short, yes. That said I also travel with CX and find economy to be equally comfortable (unless you’re unlucky and get those seats that slide down and forward to recline). I would also like to acknowledge the steward and stewardess who served me during the flight – they couldn’t have been more friendly, funny and helpful.