Vietnam Airlines has officially launched its new corporate identity as part of its ‘four-star service upgrade.’ The brand launch coincides with their rollout of brand new B787-9 Dreamliner and A350-900 XWB aircraft and marks a major leap forward in the flag carrier’s plans to establish itself as one of Asia’s premier airlines by 2020. Whilst the new brand image may be more of a subtle refresh, it is one that is perfectly timed to embrace the new cabin products that the carrier is proudly touting.

The fresh new corporate identity, found on both new aircraft embodies modernity and uniformity while “recognisably retaining the flag carrier’s familiar traits”, and has started to be rolled out across Vietnam Airlines’ network. The new yet subtle branding shift extends to new aircraft liveries; a new company logo; new uniforms; and new-look lounges, ticket offices, check-in counters, labelling and signage.

The livery has been smartened up, with a sweeping curve now defining the fuselage with a gold cheat line separating the teal and white block colours, and we feel the new logo with modernised typeface really stands out. Chairman of Vietnam Airlines Pham Viet Thanh said “With the official launch of our new corporate identity and four-star service upgrade plans, we are striving to meet new demands, create differentials and add more value to serve our customers better. We are determined to make Vietnam Airlines a strong airline, bringing passengers the best flight experiences thanks to the perfect blend of Vietnamese cultural traditions and state-of-the-art technologies.”

Joining the new look brand are the new uniforms that were announced back in March. The traditional Ao Dai uniforms are still at the forefront of the passenger experience, and the new brighter colour uniforms on the girls look both fresh and contemporary. 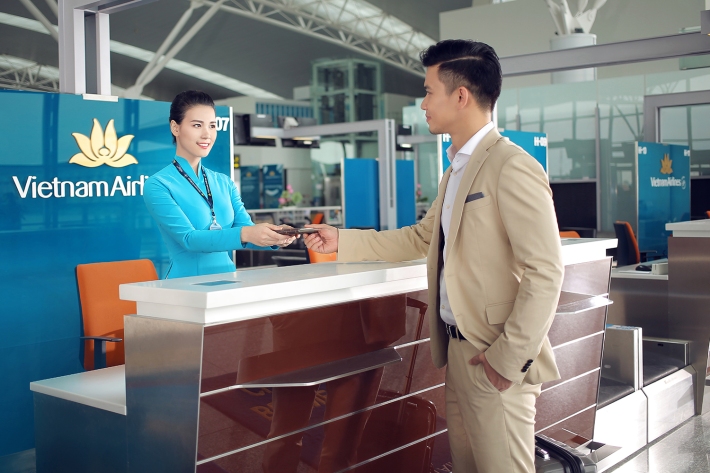 We like the subtle shift here rather than radical redesign. We’ve always had a soft spot for Vietnam airlines, the bold strong coloured aircraft constantly turn heads wherever they land and the golden lotus symbol has become synonymous with the carrier. Whilst there is no news of the new lounges on offer yet, the new interiors coming online in a matter of months have certainly attracted media attention and all eyes certainly are turning to Vietnam Airlines. With the new brand, new service offerings and new hard product, there is every chance the carrier will receive its coveted 4-star rating by next year.