Today, Qantas revealed its next-generation Premium Economy seat, which will debut on the airline’s brand new fleet of Boeing 787-9 Dreamliners that start flying in October 2017. In comparison to Qantas’ other Premium Economy seats, these new seats are wider and offer more functional space overall. The new seat also has a unique recline motion that provides a class-leading level of comfort.

When the rear of the seat reclines, several sections shift to support the body as it moves into a more relaxing position. One of the benefits of this motion is the tilt and pan of the seat base, which creates a lay-z seat position. Originally a Thompson Aero seating design, the seats have been heavily customised by leading Australian industrial designer David Caon.

Featured on their 787-9 aircraft, which will fly some of the longest routes for the carrier, including between Perth and London, the new seat design will offer extra comfort on the aircraft build for the carrier’s ultra-long haul routes.

Launching in October between Melbourne and Los Angeles, Qantas’ new Premium economy seats will be 10% wider, offer increased recline and an ergonomically designed headrest that can be fitted with a specially designed pillow. The seat also features a re-engineered footrest that significantly increases comfort when reclining and a high-definition Panasonic inflight entertainment seatback screen that is 25 per cent larger.

Qantas Group CEO Alan Joyce unveiled the seat to employees and media at the airline’s Sydney headquarters stated, “The Qantas Dreamliner will by flying some of the longest routes in the world, including non-stop from Perth to London, so we’ve focused on making each cabin the most comfortable in its class.” While we don’t see anything truly revolutionary here, we do see an approach to increasing comfort. The sheer product wouldn’t allow much more than increased legroom, recline and comfort compared to the core economy product, and the 2 x 3 x 2 configuration naturally will offer a wider seat too. 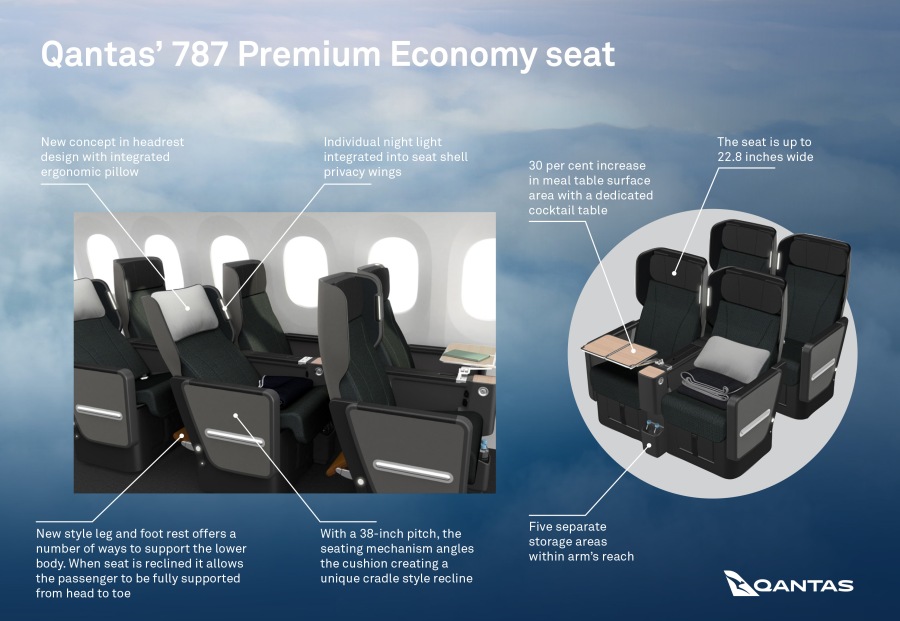 What we would have really liked to have seen – especially on such a touted ‘wow-factor premium economy seat’ was an increased seat pitch. Whilst 38″ is an acceptable industry standard, some carriers (like Vietnam Airlines) who are adopting 42″+ are receiving more positive feedback, and especially on these long haul flights, those extra inches would equate to “perceived” extra comfort. All that said, these seats are a welcome addition to the 787-9 and complete the jigsaw that creates Qantas’ newest aircraft.