Qatar Airways New Business Class Offers Innovation For Passengers, But Is It Revolutionary? 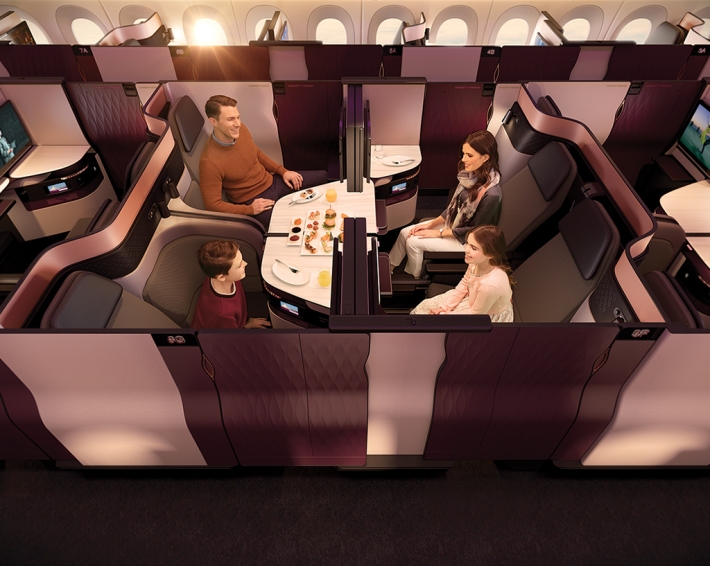 At ITB Yesterday, Qatar Airways proudly launched its much anticipated new Business Class product. It has certainly impressed the public with its claims to have the world’s first double bed in business class, new sharing plate concept, sliding doors for privacy and large communal area for families of four.

Don’t get us wrong, we are also impressed, but we take a closer look at the product’s offerings on paper, we start to question how many of these new innovations are unique to Qatar Airways.

Designed over a period of two years with B/E Aerospace, the QSuite features “the industry’s first-ever double bed available in Business Class, with privacy panels that stow away, allowing passengers in adjoining seats to create their own private room. Adjustable panels and movable TV monitors on the centre four seats allow colleagues, friends or families travelling together to transform their space into a private suite, allowing them to work, dine and socialise together. These new features provide the ultimate customisable travel experience that enables passengers to create an environment that suits their own unique needs.” As the press release states. 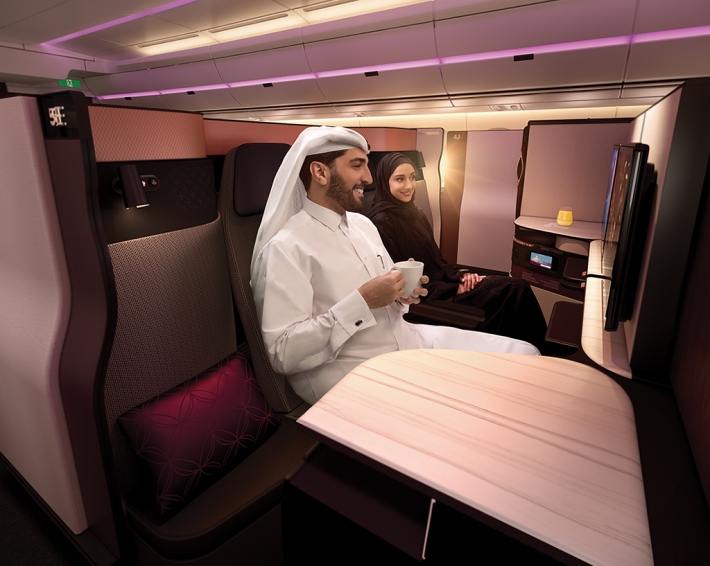 “In addition to the existing decadent ‘dine on demand’ service, the new Business Class menu will now offer a selection of snack ‘sharing dishes’ available throughout the flight, allowing travellers to turn dining at 35,000 feet into a social experience. A wake-up Express Breakfast will also be available for those who choose to sleep a little longer by making the most of the ‘Do Not Disturb’ option available on the door of their private QSuite.”

This all sounds quite revolutionary on paper, however, some of these innovations are already being touted by other carriers. For example, the ‘double bed’ concept isn’t really that unique.

British Airways and Thai Airways are just two examples of how current seat products could already be classed as double beds as there is no real divider between the seats. (Just around the head area) and carriers such as Etihad and even Emirates also offer side by side seating configurations in their business class products.

The layout of the seating is actually already pretty similar to Etihad’s Business Class Studios, both offering curved footwells, and similar forward / rear facing seats, whereas Emirates (like Thai) both offer only forward-facing options.

We think this double bed concept is also really only going to benefit passengers travelling together, as solo business travellers, sometimes on busy business-heavy routes, will certainly only take these as a last resort. For those travelling alone, it makes little difference if their seat connects with the one next to them, as long as the divider goes up between, but considering you may be sleeping back to back, small knocks on the divider could annoy the fellow sleeping passenger. 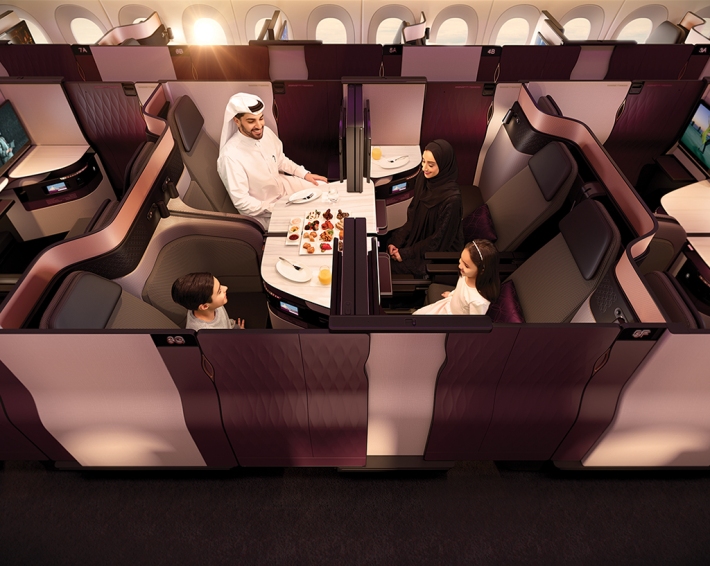 As for the communal aspect, while this is perhaps a very unique development, it only caters for families or groups of travellers who are exactly four in number, as parents with just one child, or groups of three, may have to end up sharing this space with a stranger, especially if the cabin is full, which usually on the launch route of London, it is (unless Qatar is willing to forego a paying passenger to ensure privacy in these four-seat cabins. The fact that passengers will also have to shuffle to the side chairs on the separated seats in order to see their passengers on the other side of the sliding TV’s raises issues of comfort due to the smaller legroom on these more ‘occasional’ ottomans.

In fact, the communal aspect isn’t new either, charter airline group Thomson released their concept (above) for a communal seating configuration back in 2014, and while it never came to life, it shows that cabin designers have been playing with the idea of communal seating areas for some time.

As for the privacy found by the sliding doors, Delta’s A350s will roll in to service this year with their own private Delta One suites. These seats will also offer equal privacy to passengers, and with the ability to raise a partition between middle seats, also caters more closely to solo business travellers compared to families. JetBlue has been offering suites with doors on its Mint product for a few years now. Talking JetBlue, they, like Virgin America and Hawaiian Airlines also offer smaller Tapas plates – which Qatar Airways has just announced – that are ideal for sharing.

So all in all, the touted ‘revolutionary’ product isn’t actually anything new, but what it is however, is a very well packaged product, that when aligned with the rest of the Qatar Airways passenger experience, will no doubt be a huge success and a highly desirable business class option for travellers. We applaud the airline for investing in its own product, which is lavished with a fine attention to detail, and perhaps responds to their unique passenger demographic.

The suite will first be showcased on the airline’s prestigious London-Doha route this summer. 777s and A350s will be retrofitted at approximately one a month.