A Closer Look At Hainan’s New Uniforms By Laurence Xu Hainan Airlines is fast becoming an airline of International recognition. Garnered a 5-star rating from Skytrax might give the carrier the kudos it needs for many, but it’s ever-expanding route network is what is truly gaining attention from potential consumers across the globe. Today’s announcement of direct flights between Chengdu and New York is their 12th route from China to the US and now means they fly to more US destinations than any other Chinese carrier.

Size and breadth isn’t everything though. The airline is showing a design-led direction that is setting its stall higher than its mainland Chinese competitors and putting the passenger experience at the spearhead of its product strategy. Suffice to say the carrier stands alongside Cathay and China Airlines as leading APAC aviation companies. One of the latest examples of this was the reveal of Laurence Xu’s new uniforms for Hainan Airlines. “When waiting at the boarding gate stewardesses will be wearing Cheongsam, coats, hairpin, beret-style hats, and high heals to show their full respect to passengers.” says Laurence Xu. Initial impressions certainly do count, and the uniforms will certainly turn heads in the airports.

When putting the uniform on for the first time, Liang Yuan, senior flight attendant for Hainan Airlines said “I was amazed by how I looked in the mirror, especially in the cheongsam. It broke the stereotype of uniforms in my mind, and it’s really a work of art. It also quite fitted, and it could highlight the wearer’s beauty. I think that is what a master’s work looks like.”

But the uniform has been designed not just to look good, but to be highly practical and last the test of time through wear and tear. “The fabric was made by polyester, cotton, silk, and spandex, which made the whole uniform very light – it is very important for uniforms on planes to have less weight, because every piece of weight on planes will lead to fuel consumption. So, the more weight we could reduce, the more environmentally friendly our flights would be. Weaved by the materials mentioned above, the fabric resilience has been increased as well.” said Xu.

“Considering the uniforms may be stained by beverages or foods, the new aprons were processed by high-tech coating so they are now waterproof, greaseproof, and resistant to dust. The design team also made the Cheongsam static-free and with radiation protection.” This level of detail in understanding of the stresses and strains that cabin crew endure during a flight showcases the six months spent developing the collection.

Small adaptations were considered replacing the previous incarnation. Unlike the former version, the Cheongsam was designed as a three-quarter sleeve instead of short sleeve, so that it can keep stewardesses warm in the cabin. The double-sided cashmere coat and a detachable cape was added to each set of the new uniforms, which contributed to both aesthetics and practicality.

“You can’t see very clearly the fabric of the uniforms in the photos released, but you will find it in fact there is always wisdom after you wear it. For example, cotton was added to the fabric used for making the Cheongsam, which made it very comfortable to touch, and a little warmer to wear; It is waterproof and greaseproof, so we can just wipe off water or oil spilt on it by wet wipes; It is also crease resistant and washable, which would save us plenty of time taking care of them.” said Wang Ti, a Project Manager in the Service Department at Hainan Airlines. 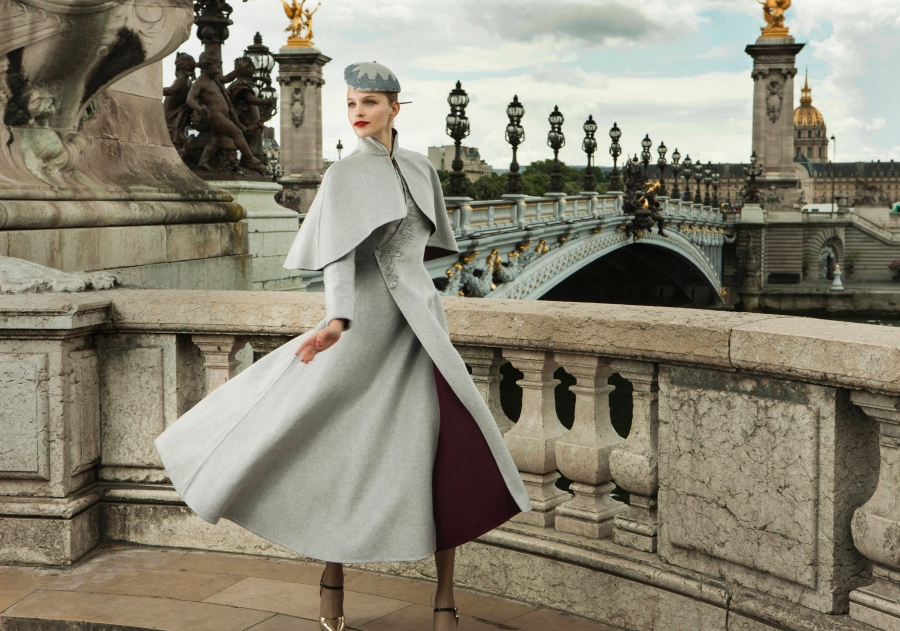 Uniforms themselves are one of only a few truly unique brand touchpoints that can be placed into an aircraft. Hard products can be customised, but the handful of suppliers means there can be similarities in look and feel, IFE, food and drink all come from a limited amount of suppliers too, so apart from a few certain key elements, uniforms help define the brand image of an airline, so it’s clear to see why so much time and effort is invested into making them truly exceptional.