Tomorrow will see the launch of Hainan Airlines new ‘Rosy Clouds’ uniform. The fifth uniform for the airline, designed by Laurence Xu was revealed in Paris Couture Week last year, and took our breath away. In fact so much so it was awarded best new uniform at the DesignAir Awards 2017, beating the likes of Delta’s recently launched uniform by Zac Posen.

In the photo above you can see the evolution of the uniform from the very first (on the right) through to the latest Cheongsam uniform and its accompanying jacket. On the modern take of the traditional Chinese dress, clouds, waves, and mythical birds of prey feature within the airlines’ soft grey color palette and enable this fashion-forward look to pay homage to a rich past.

“Gently I take my leave, Just as gently I came here; Gently I wave my farewell, To the rosy clouds in the western sky.”

Inspired by a poetic theme of ‘Rosy clouds filling the sky’, the latest uniform collocates with clear-line stand-up -collar gray coat and double-sided cashmere overcoat, which brings out the oriental beauty of Hainan Airlines. 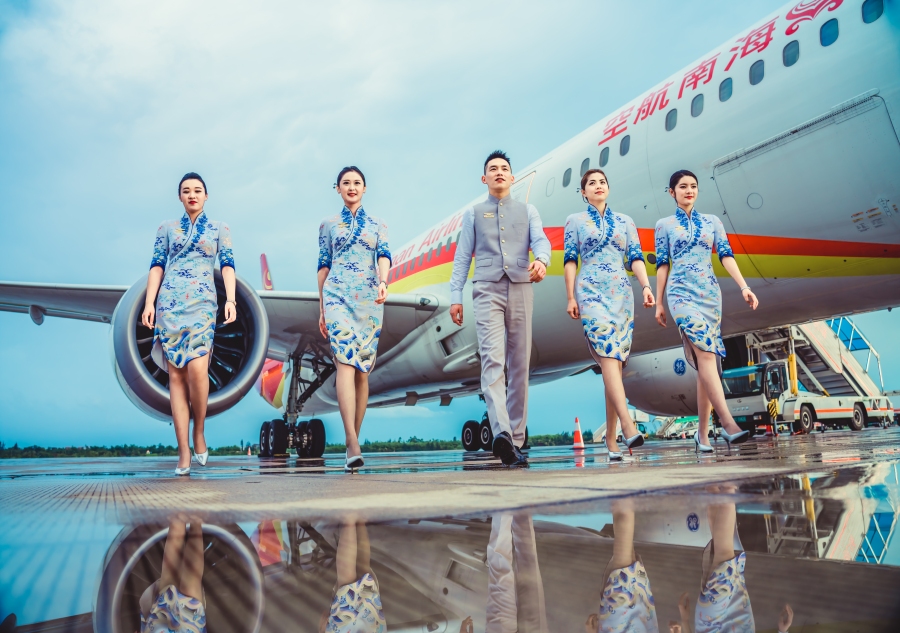 The uniforms themselves have been tested heavily to ensure they are suitable for use in the cabin. Hainan Airline reviewed over 1,000 design drafts and tested more than 100 samples of garments and accessories before reaching to the final version. Small adaptations were carefully considered when replacing the previous incarnation.

The Rosy Clouds are made as three-quarter sleeves instead of short sleeves, so that they can keep flight attendants warm in the cabin. Utilising light fabric construction techniques, the uniforms also reduce fuel consumption, making Hainan Airlines more environmentally friendly.

The new uniform will certainly draw some attention in the airports over the coming months as its not only new and unique but effortlessly elegant. This is one we can’t wait to see in airports around the world.