United Look To Confuse Us Further With Even More Travel Options

Before the merger of United and Continental, United offered a plethora (not often I get to use that word!) of bolt-on options for your flight, from sending your luggage before you, to extra leg room, lounge access, priority security clearance, priority check in. These are apparently great revenue streams for the airline, all which have to be purchased seperate to the ticket, as United has decided to add even more to their seemingly endless list of options.

Speaking to reporters after a speech in Chicago, Jeff Smisek, chief executive of the airline’s parent United Continental Holdings, said the company is planning to unveil some new offerings now that it has integrated its reservations system with that of its 2010 merger partner Continental Airlines. “We also, of course, are expanding the ancillary products and services we will sell that customers will buy. We’ve held in abeyance a lot of that,” Smisek said, declining to say what the company planned to offer next. “I’m not allowed to talk about it, but they’re going to be good and they’re going to be cool,” he said.

Perhaps this is more of a PR stunt than a real advance in service offering, especially after a fairly disastrous attempt of trying to align Continental and United’s reservation systems. Now whilst this might generate some interest into what this might involve, and whether any new concepts will be put forward, I can’t help but feel absolutely lost in United’s offering system. If I were to buy lounge access, does that include priority security clearance? If I get an economy plus seat, should I also book an upgrade? The American system for this is fairly alien to the European market, and seems overly complicated. Instead of increasing their amount of bolt-ons, they should simplify and group them together. Offering a more seamless product. If you don’t fully get this, take a look at their menu on their old-school, user unfriendly, website and see if you can navigate your way beyond the simple flight booking! 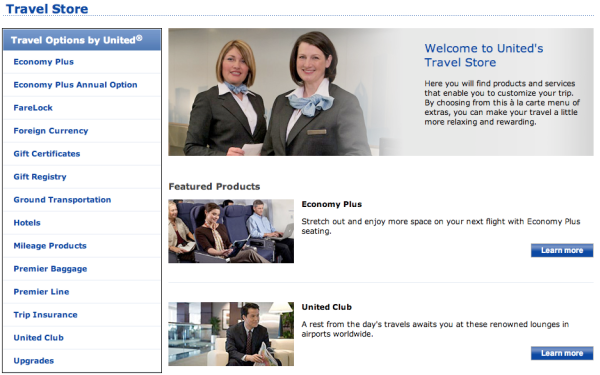 Surely with an easier product it would actually end up costing less for the company to run all these travel programs and enhancing their passengers experience. This is one of the reasons I shy away from the behemoth American carriers, their confusing fare structure and fundamentally weaker onboard offering continue to baffle non-American passengers. They should perhaps look at the newer LCC carriers in America on how they manage to successfully add ancillary revenue in a simple and much more manageable way.

That said, when the products get released, you’ll be the first to know!