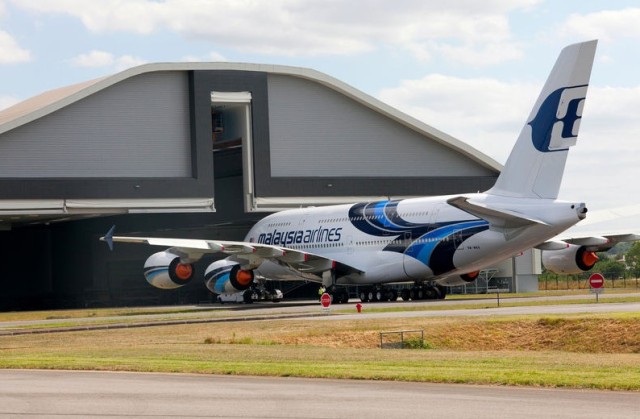 So Malaysia Airlines have been playing all sorts of crazy games with their new toy. Bringing it over to Kuala Lumpur half finished, and now fully painting their livery in their new design. Whilst this design has been publicised as their new paint scheme in a lot of their campaigns as of late, I can’t help but think they’ve missed the mark.

The actual swashes of blue are a great idea in concept, and on the artists impressions they certainly do make a certain impact, but in reality, the design has been hampered by the airframe it’s painted on. Doors, windows, rain troughs, all the elements on the side of the airframe cut into the design, meaning up close it’s fragmented and messy. The scheme randomly stops, highlighting the wing box intentionally, which only makes the plane look fatter. The nacelles on the engine, painted in the same blue swashes feel incoherent with the back of the airframe, and the MAS logo seems way too high on the tail plane. Whilst bold and bright, and I hand it to them for trying to create something so refreshingly different, feels clunky and awkward.