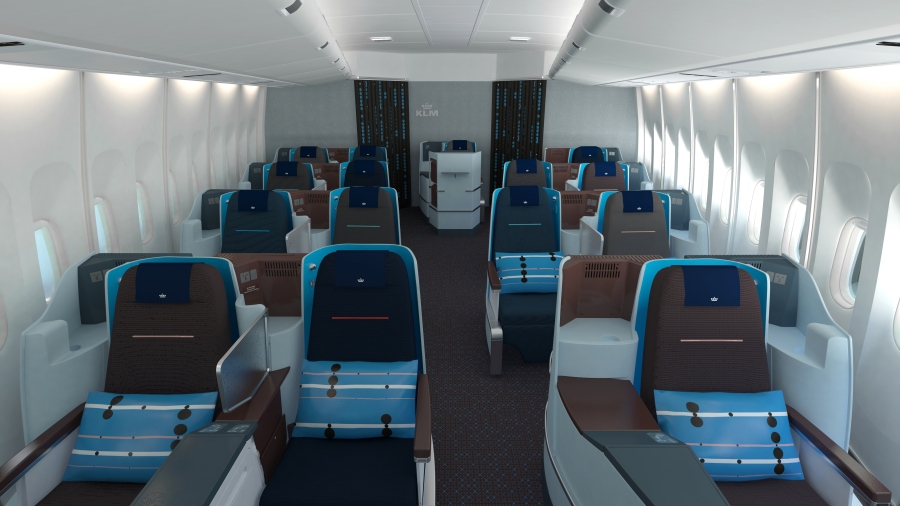 KLM unveiled yesterday their brand new business class seat and cabin, which has been much anticipated for the last year. When it was announced that Hella Jongerius would be designing the cabin, there was much speculation that KLM would bring an entirely new concept to the cabin. However, from the images revealed, it seems she has just adapted the tone and feel of the cabin, with the hard product being an off the shelf option, as many carriers are currently doing. This wasn’t really going to be a surprise though, with the amount of testing new seats have to go through, to deliver a brand new product within a year that could be rolled out was very much wishful thinking.

The seats themselves are a huge advancement, the fully flat seats really were the only option for the carrier, being one of the only European carriers to offer cradle type business class seating. The B/E Aerospace Diamond seat offers 78″ of bed when fully extended, and a generous seat pitch of 60 inches. The seat itself has been cleverly adapted by Hella Jongerius who has introduced a dot matrix motif everywhere in the cabin, from the class holders to the soft furnishings. (We still think the embossed dot pattern for the glasses on the arm rest though will become dirty very quickly and the curtains have a nod to ‘The Matrix’ in them) Our one real gripe is that the cooling vents for the entertainment system are very prominent in the seats and spoil what would otherwise be a very refined and smart seat shell. 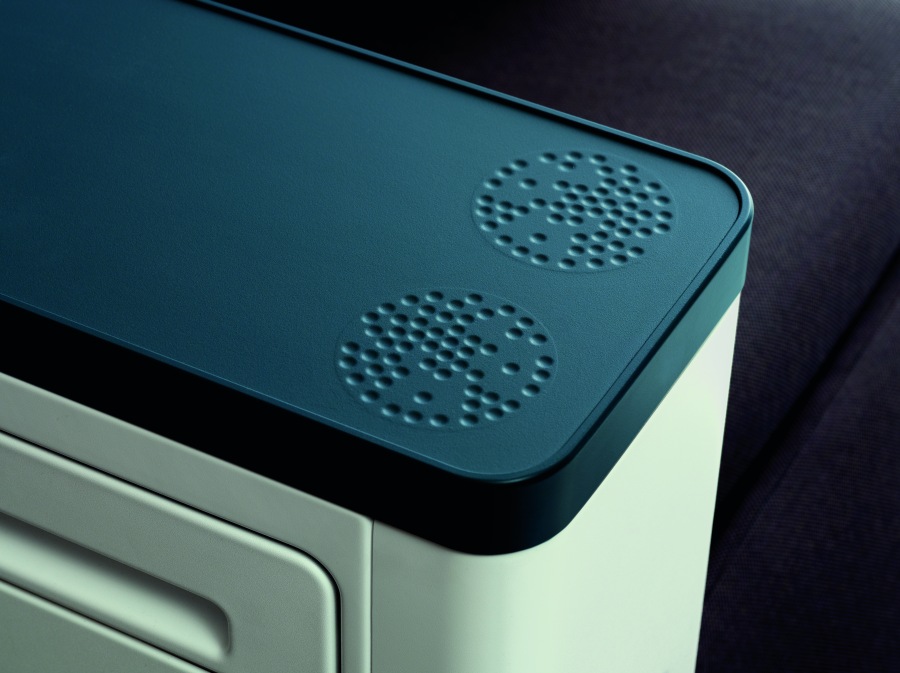 Speaking on the design concept, KLM state “The guiding principle of new design is to ensure that passengers feel at home on board. That involves a transition from a business-like look to a greater sense of being at home. This has been achieved by using a characteristically warm colour palette, more sustainable materials, and by enhancing personal comfort. The design is timeless, recognisable and unified by the decorative dot patterns that feature on every item.”

Having worked with KLM before, it’s easy for me to spot that this is an adaptation of the current KLM colour palette, and there isn’t a drop of their accent orange colour to be found anywhere in the World Business Class cabin. “Naturally, the new interior features the fresh and recognisable KLM blue. To ensure the sense of comfort on board, Hella Jongerius has blended warmer and darker colours into the existing colour range making the KLM blue sparkle even more. The five new colours are aubergine, dark brown, midnight blue, cobalt and dark grey.” What is nice to see is that they are maintaining their sustainability drive and have woven into the carpets old KLM uniforms, to add speckles of bright colour.

Helle said at the launch of the new product “It is truly remarkable that KLM is open to this kind of approach for its interior. Aircraft interiors have to meet an unbelievable range of technical requirements. We achieved this by simplifying the new seat, changing its colour and upholstering it with high-quality textile.”

There are a few unusual elements here, that don’t seem to work out though, looking at the nose cone layout for the 747-400, there are some slightly awkward seating arrangements, where there are 3 stand alone seats that don’t have an adjoining seat and the rest are in a 2×2 configuration, making for an asymmetric seating plan. The upper deck and presumably the 777 seating plans will feature a 2×2 and 2x2x2 seating plan. There is also the element of the metal divider which appears to be permanent, and a little bit harsh compared with the softer furnishings and goes against the ‘Greater sense of being at home’ element the new cabin is meant to create. There is also no mention of the MD-11 fleet and whether they will adopt the seat before being phased out. The first 747 will receive the seat in July this year.

But it is easy to be critical when the industry is full of excellent innovative cabins, what should be appreciated is that this cabin, combined with the breadth of network and decent schedules is now a real contender in the European market. The seat itself is decent, and tried and tested, and with a flatbed, will attract a new wealth of business travellers in a fiercely competitive European market, and let’s not forget that whilst superficial, the design elements included in the cabin are modern, contemporary and complete. My parting question is Has it changed your opinion on KLM World Business Class? Are you more inclined to travel with them compared to before?

The answer for us, is yes. In our view, job done.