Festive Cheer All Over The Internet

It’s definitely that time of the year, when Christmas comes a calling, and airlines around the world try to work out one way of celebrating one of the busiest times of year. From Fantasia styled liveries through to Dancing cabin crew or Santa in a box, here’s the three that are taking the net by storm right now.

Unless you’ve been under a rock for the past few days, you’ve probably seen on Facebook, one of your friends posting this amazing footage. WestJet very cleverly have put together a video that showcases the festive spirit the airline has. Obviously made to go viral, the video stars a Santa in a box, who through live video conferencing asks the passengers of a flight what they want for Christmas. Who would have thought what was going to arrive on the baggage belt when they arrived at their destination. This feel good video really is a big hitter, already with over 14,000,000 YouTube hits in just a few days, and it is still going strong. 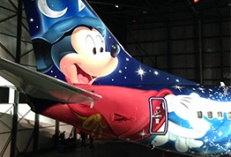 What Christmas would be Christmas without Disney’s Fantasia, WestJet again have celebrated the festive cheer with a magical Walt Disney plane, this time featuring Mickey Mouse, what’s more, on December 3 the airline allowed 16 members of the Boys and Girls Clubs of Canada from various cities across country to take a magical journey. Along with club chaperones and WestJet volunteers, the group travelled to Orlando for three days of fun at Walt Disney World Resort, “pay-it-forward” charity activities, teambuilding and leadership training. Here’s some fun facts about the livery:

Flash mobs may be a little ‘done’ but we still smile when we see happy people dancing in unison in public spaces. It brings a bit of festive cheer and joy to us. Two weeks of rehearsals went into producing this feel good song and dance at Hong Kong International Airport. Cathay Pacific, and your 300 strong dance troop…. well done! (Our American friends may want to watch this using this link here.)

If you spot more, let us know, we’ll be sure to post them here!