Interspace, the new seat by New Territory & Universal Movement challenges the usual premium economy proposition, but is it ever going to take off?

London-based creative firm New Territory has just revealed details of its new spin-off company ‘Universal Movement’ to address the lack of innovation within high density seating on aircrafts and in other transportation environments. Universal Movement’s launch includes the announcement of its first project, Interspace, an innovative approach to the traditional airline seat which utilises a patented wing support system and aims to provide a new level of comfort.

It’s an interesting property that has raised an eyebrow or two of ours, as on initial impression, it solves a problem which we – like most – have encountered, where it is easier to sleep semi-foetal when sat upright.

The Interspace seat’s solution features two easily-deployable padded wings that fold out from the seat back, allowing passengers to rotate and lean on a cushioned surface and thereby providing greater lateral support. There is also the option of only deploying one wing on either side of multiple adjacent seats, effectively creating a private bay for families or small groups of passengers. “The product has been developed with the knowledge that aircraft cabins have traditionally failed to look beyond seat pitch as the primary determinant of comfort,” states New Territory’s press release.

New Territory discovered that what people actually crave is the ability to rotate and redistribute weight within their seat, which is why you often see people leaning on the window of the aircraft using makeshift pillows. 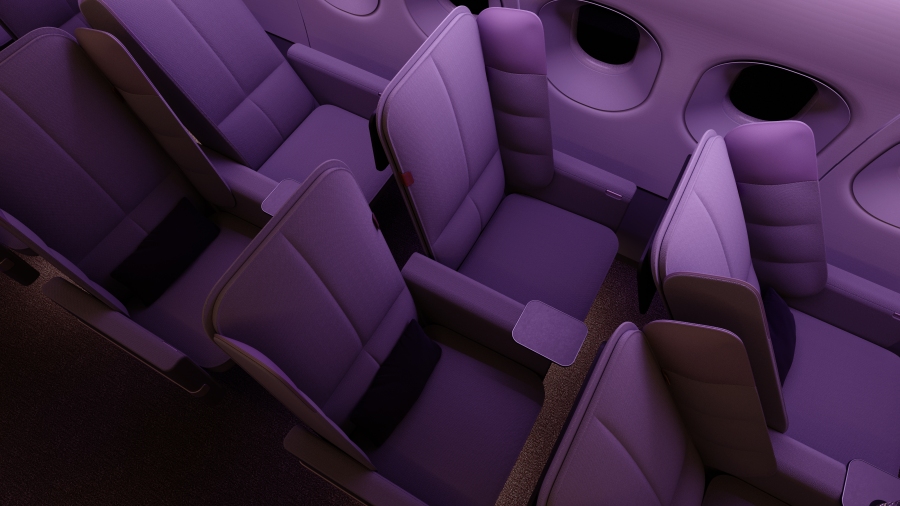 Luke Miles, Founder & Chief Creative Officer at New Territory commented, “Universal Movement and Interspace have been borne from the fact that not enough time, thought and resources have been invested into the back of the aircraft cabin. We believe that comfort, good posture and wellbeing is a human right irrespective of financial status or social class. If you consider the psychology of the cabin, its linear, grid-like form is restrictive and as a result, seats have been designed for what is essentially an unnatural posture and seating position. 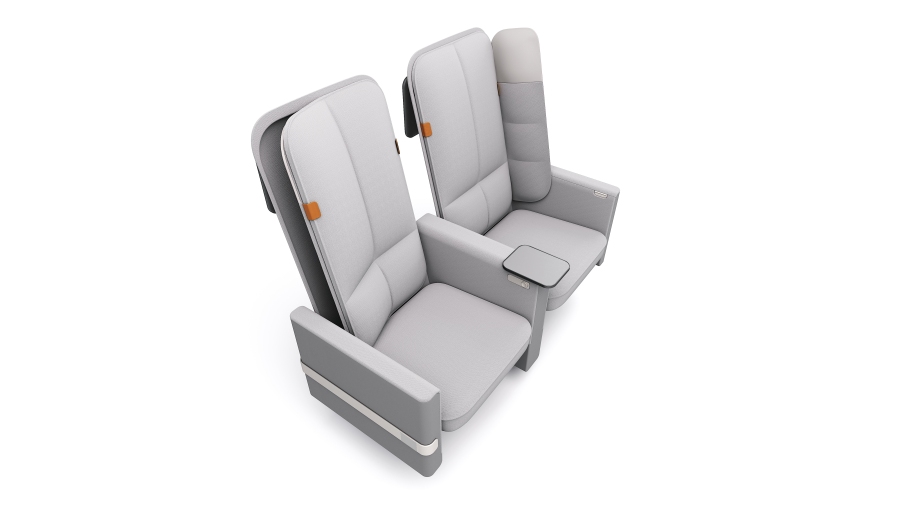 The time has come to seek designs, products and services which tackle this subject head on, creating affordable solutions for those businesses who share the same values and desires. For this reason, we wanted to break the mould with this first product, which is the first of many to come from Universal Movement.” 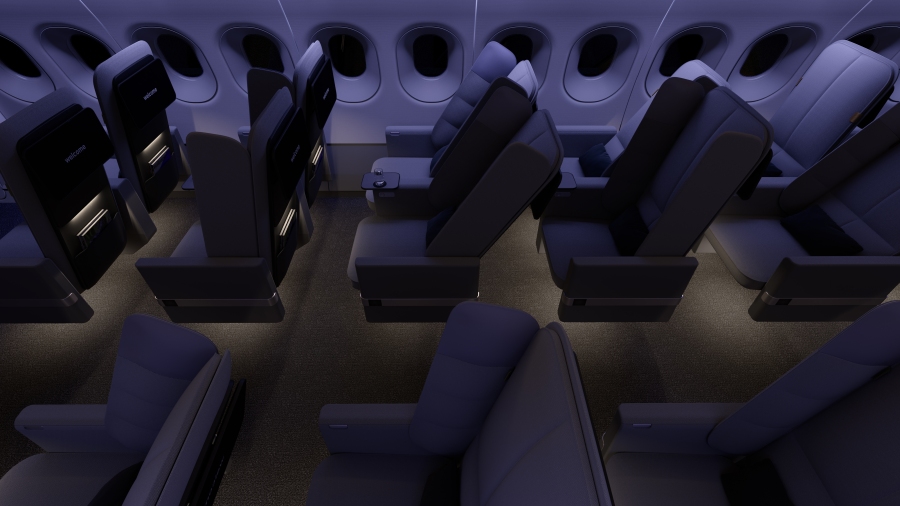 New Territory have designed the wings on Interspace with living hinges so that they can be easily folded back into the chair’s upholstery and replaced in service. This provides better access for passengers to move to and from their seat, much like the way in which an armrest can be rotated upwards. The hinges are also connected to the material at the back of the seat through a composite assembly, meaning that the wings are robust enough to handle passengers leaning on them. It is also possible for only one of the seat’s wings to be deployed so that different sleeping preferences and body shapes can be catered for. 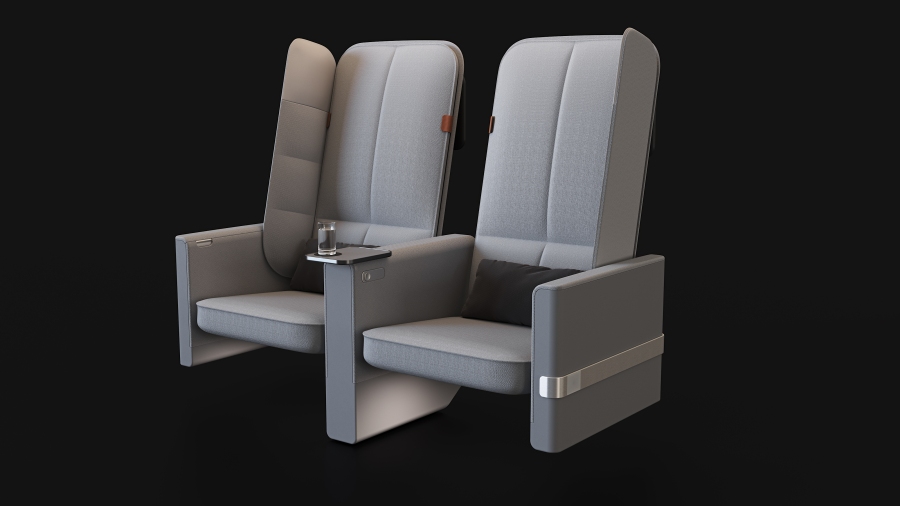 While the product is certified and a retrofit is being explored on existing fleets, we draw concern regarding the initial prototype. The wings when deployed seem to block the ability to fold out a tray table from an arm. There’s the added problem of turn arounds, as this is another hidden area in the seat which will have to be checked for security issues, and from a maintenance & cleaning perspective, add complexity that will also increase the turn around time. The cocktail table also creates a hard edge in the knee area of the seat which is otherwise padded in fabric.

While it seems that the tray table will actually be clipped on to the seat, it also raises an issue, that while the seats are reclined, passenger space will be limited as per usual, but a passenger will have to sit forward to operate the wings. This is similar in approach to the older-generation Upper Class seats which had to be folded in to a bed with the passenger out of the seat – a product that Luke Miles was also involved in.

Limitations aside – and most likely ones that will be solved prior to entry in to service,  carriers will have the opportunity to embed their branding onto the inside of the wings and introduce different types of finishes to the padding which has the option to be removed and washed when necessary.

The company is also looking to future proof the product, and carriers could additionally choose to embed technology within the wings. Speakers for example could be used to create a more immersive experience, while facial recognition technology can be inserted into the back of the seat – something being explored within further product lines.

Time will tell to see if there is an appetite for such a product, and while we applaud the innovation, it would be great to see a product that is more accessibility minded, as for someone with disabilities, or even limited movement will not be able to use the seat as much as able-bodied people, and whether the wings will be classed as hidden pockets that need to be checked on turnarounds for security reasons. 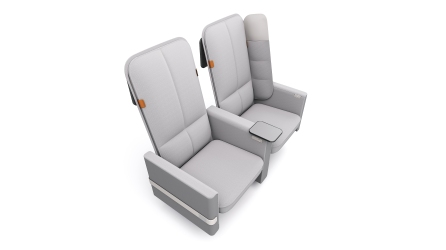 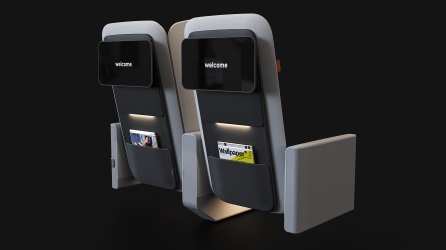 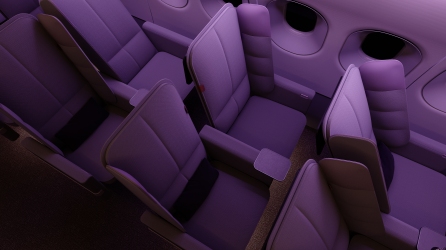 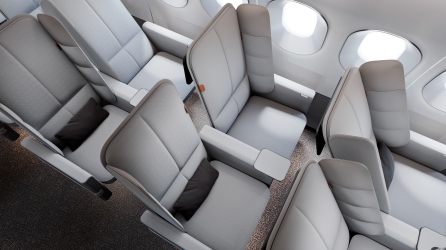