Taking a leaf from the new wave of North American carriers who have already introduced ‘Premium Economy’ to their fleet to cross the big divide from Economy and Business, a struggling Air Canada is currently in RnD to develop and introduce a ‘Premium Economy’ to their fleet. This will be a major draw to Air Canada’s long-haul network, and will create an attractive new premium product for one stop connections into America for intercontinental travellers.

It’s fair to say that Air Canada’s big proportion of revenue comes from their business class travellers, and this will offer a higher revenue stream for the airline, who is most likely being hit from a degraded business traveller market at the moment, providing another pricing bracket for business travellers to purchase into. With competitor, WestJet‘s recent purchase of new Bombardier aircraft, Air Canada will need to invest into their fleet to make them feel contemporary, or their signs of wear and tear may prove a detriment to them. 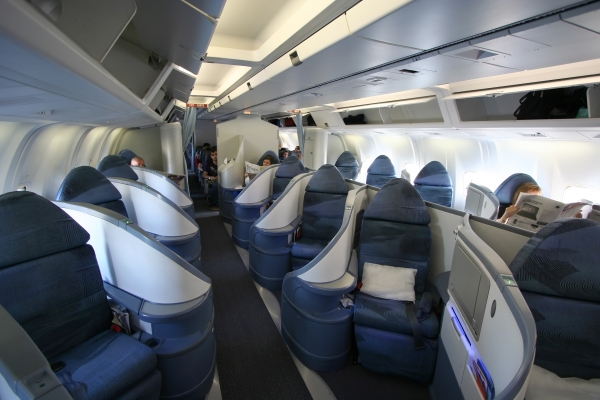 Air Canada’s current long haul business concept ‘Executive First’ (above) is similar to the seats found on Delta’s ‘Business Elite’ herringbone fleet or that of Jet Airways in India, a comfortable, if not more compact version of the super-successful ‘Upper Class‘ product of Virgin Atlantic. Whilst most airlines in North America offer ‘economy plus’ seating (economy seats with extended legroom) Air Canada have hinted at larger legroom and wider seats for their premium economy, meaning that this will be a whole new product and no doubt similar in concept to that of British Airways new premium economy seat (pictured below) or that of Virgin Atlantic with large seats, a larger TV screen, deeper recline and a segregated cabin. Considering Air Canada’s catering concept, I think they will possibly extend the business class dining experience through to Premium Economy, in a similar move to Air New Zealand’s ‘between’ class concept.

For European travellers, Air Canada consistently has provided an economical one-stop solution travel to most of North America, with appealing connections and schedules along with what can be considered as a solid and contemporary business class concept. No doubt, their Premium Economy concept will wipe their USA counterparts archaic ‘Economy Plus’ seating away with far superior product. Sadly though, Air Canada is being hit by weak earnings and whether this product will be rolled out, will be based purely on financial gain, rather than customer preference, so whether this advancement happens, whether it becomes a ‘pseudo’ premium economy or becomes a success depends on a very careful strategy, that’s still in the works. “We’re very familiar with some of the benefits that you can have from having premium economy. The big factor, of course, is measuring the capital costs to transform airplanes. But that’s under study right now.” CEO Calin Rovinescu has said about the premium economy cabin concept. As soon as DesignAir hears more, you’ll be one of the first to hear of it here.

Don’t forget to follow this blog to keep up to date with the latest developments!