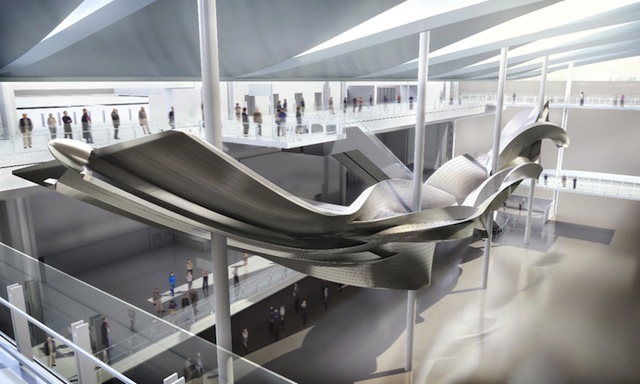 No, not that Richard Wilson, but sculptor Richard Wilson has been commissioned to create a new sculpture to fill the hall of the brand new Terminal 2 at London’s Heathrow Airport. Aptly dubbed ‘Slipstream’, the sculpture will fill the length of terminal’s Covered Court, twisting across the atrium’s columns and physically integrating with the architecture. It’s no small feat either, at over a staggering 70m long and weighing in at 77 tonnes (more than an empty 737), it will be the longest permanent sculpture in Europe when the terminal opens in 2014.

According to their press release, “The sculpture’s aluminium form describes the shape a stunt plane would carve through space, starting as an abstract volume before becoming recognisable at its furthermost point. Wilson’s intention is “to transpose the thrill of the air-show to the architectural environment of the international air terminal.” Project curators, Futurecity, conceived the commission on behalf of Heathrow and ran an international competition to select an artist for the project. To make Slipstream, Wilson has enlisted structural engineers Price & Myers and specialist fabricators Commercial Systems International (CSI).”

Although already featured in London newspapers recently with mixed reviews, I like the piece. A simple and understandable piece will tire in the eyes of the frequent travellers through a short period of time. This twisting sinewy abstract form will continually provide new shapes and shadows every time it will be looked at and may create a different emotion each time it’s viewed. For that, it will always make me look up every time I travel through Terminal 2, and hopefully a few others from the estimated 20 million passengers that will pass through the terminal every year. What do you think? Do you like or loathe?

4 replies on “I Don’t Believe It! Richard Wilson’s New Sculpture In Heathrow Terminal 2”