This week marked the arrival of Air Serbia’s first A319 to Belgrade Airport. 49% owned by Etihad, the original national airline JAT was re-branded to become the new ‘Air Serbia’, introducing a brand new livery, planes uniforms and total visual identity. As we reported on EX-YU Aviation back in January, the airline (and it’s competitors) have had a checkered history of liveries, and it was time for the someone to give the carrier a new and modern lease of life.

Interestingly, the new brand will take the Serbian name and its red, white and blue colour scheme from Belgrade to the world. A key figure in the rebranding of the national airline was 25-year-old graphic design student Tamara Maksimovic from the Serbian city of Novi Sad. At the end of her course, Tamara was required to develop a portfolio of branding designs for an organisation of her choice. “I wanted a big project, something with a lot of detail and a lot of applications,” she explained. “It came to my mind to choose an airline. I chose Jat Airways.” The airline discovered Tamara’s portfolio on a graphic design website, and engaged her to design the new branding for Air Serbia.

As you can see by the designs and livery, there is a historical connection to the nation of Serbia, taking a connection to old coats of arms. “When I started working concept, Air Serbia told me that [they] would like to be something reminiscent of Serbia, in the story, we come to the visual image, among other things, of the double-headed eagle. The idea was that this was a modern coat of arms of Serbia.”

So our take? Let’s look at this systematically. The ‘Herald’ is a great bit of design, an iconic image that works well, and will have many visual uses in branding. The execution of the livery? There are a few elements we feel are a little unbalanced. Generally speaking, the livery is strong, and timeless, the colours are strong and unique. What we don’t like, is the ‘visual weighting’ on the livery. The tail fin appears heavy, and the curve on the nacelle design only helps to give the impression of a false horizon that works against the architecture of the plane. The typeface on the aircraft is also too far rearwards, only helping provide a sense of a misplaced centre of gravity. This is show better in the image below, where we have mimicked the horizon the visual elements create. You can see in the background the natural horizon Austrian airlines creates. 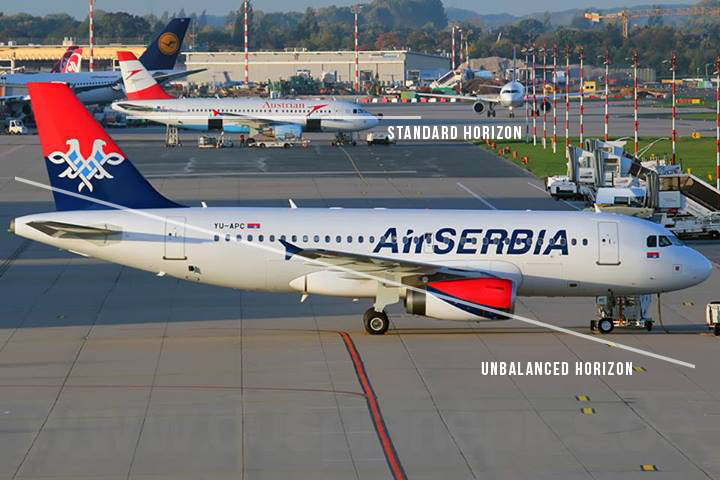 The simple solution here would be simply to move the typeface forward, and reduce the camber on the swash on the nacelle. Also to mention is the typeface itself, whilst it is meant to be modern and the slant gives the impression of movement, we can’t help but feel the ‘modern’ typeface is too obvious and sits at odds with the tail fin Herald. Also, the swash connecting the ‘i’ and ‘r’ gets lost in the livery, which is an example of how a logo doesn’t always get designed with the surface in mind. Still, this all said, the whole look is a leap forward, and bar the comment that ‘a white fuselage imparts luxury’ we applaud the design sensibilities that have come from a 25 year old designer, who was found off of the internet. When the official design gets launched later this week, it will be interesting to see how the design ethos passes on to the uniforms, website, and other branded goods. Let us know what you think?