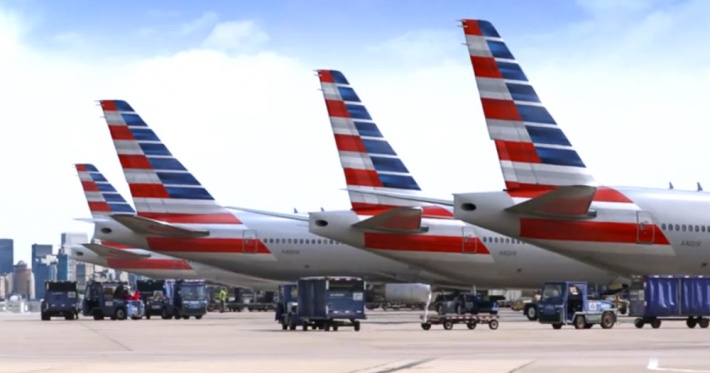 It’s no secret that we weren’t fans of American’s new livery when it came out, and although we loved the new 777 premium cabins, we thought the livery was missing the mark, being overtly American, one thing that Internationally has always been a nationalistic stereotype picked up on by the rest of the global community.

It was a story that was picked up on by newspapers, commented on on news channels and had fans up-in-arms, causing a huge amount of controversy, however the outgoing CEO of American at the time said the new livery was here to stay. Now that the merger has completed between the two American carriers, new American CEO Doug Parker kept getting asked one question in his interviews.
Are you going to keep the livery that American unveiled last January?

His reply was to offer it to the staff of the airline, with a vote taking place currently (finishing in a few days), announced in an internal memo. In a lengthy and well constructed letter, he mentions “While I enjoy debating the merits of certain aircraft liveries as much as anyone, I have always believed they are not particularly important to the success of an airline.” Whilst this comment isn’t wrong, it is in our instance a little short-sighted. The livery, is by essence the biggest billboard for the airline possible, it needs to impart the personality of the airline, especially in countries where American is less known. A big American flag, no matter how it is described, can be seen as a negative, and no other major carrier uses their national flag so blatantly on their aircraft for the same reason. Carriers now have to appear international and less country-centric to appeal to a broader audience and show a more culturally sensitive approach.

He further goes on to describe that for financial and technical reasons, they won’t change the entire plane look, but only focus on the tail. We have to agree, that is a sensible move. Not only is it financially a more viable and logical step, from a branding perspective, a rapid change in a brand image can be damaging, showing an instability at the airlines core. However, he has offered his staff two choices, that both seem perhaps a little unconsidered.

One option is to offer the current livery design that has been rolled out over 200 of the 620 aircraft currently in the fleet.

The other option, offers the original Masimo Vignelli “AA” initials with eagle crest which is because “we have heard from many employees that they miss the old AA with the eagle.” Now if you ask us, this is a step backwards, as we are now looking at two contrasting logos on one aircraft. Now whilst here at thedesignair.net we would love to see the old logo and livery forever (It won our top livery 2012) we can also see the need for change. What we can’t understand is why there weren’t other options offered for the tail fin design that managed to feel a little more considered.

Even us here at thedesignair.net, quickly knocking up in a morning, seemingly have been able to create something that may be able to replace the flag tail, without having to step back to the past.

In our versions (above) the new ‘Eagle swash’ design is perfectly designed to match the tail fin angle, and when the eagle’s beak is taken off, the logo cleverly becomes ‘all things American’ but in a more subtle way. A star can now be seen, along with the red, white and blue of the tail – forming all the elements of the American flag. Wrapping the logo around the fuselage (as in the first image) will also help balance the livery design, connecting the tail fin with the fuselage. Whilst we our ideas aren’t perfect (and will probably come under fire), they showcase the fact that more can be done with the jet than just these two options that Doug Parker wants to offer. Infact, we are holding this open to a vote…