How A Livery Took Flight. An Exclusive Inside Look At Cathay Dragon

Part two of TheDesignAir’s exclusive series on the making of Cathay Dragon. Read Part One here.

Cathay Pacific and newly branded Cathay Dragon’s synergies may seem completely obvious to passengers who have flown on both airlines. However to entice new customers to experience the two airlines, so similar and yet distinctly different brought a host of challenges to Cathay. As Ruaraidh Smeaton, Head of brand for Cathay explains to TheDesignAir, the rebrand of Dragonair to Cathay Dragon allowed for a unique opportunity to align two powerful brands. 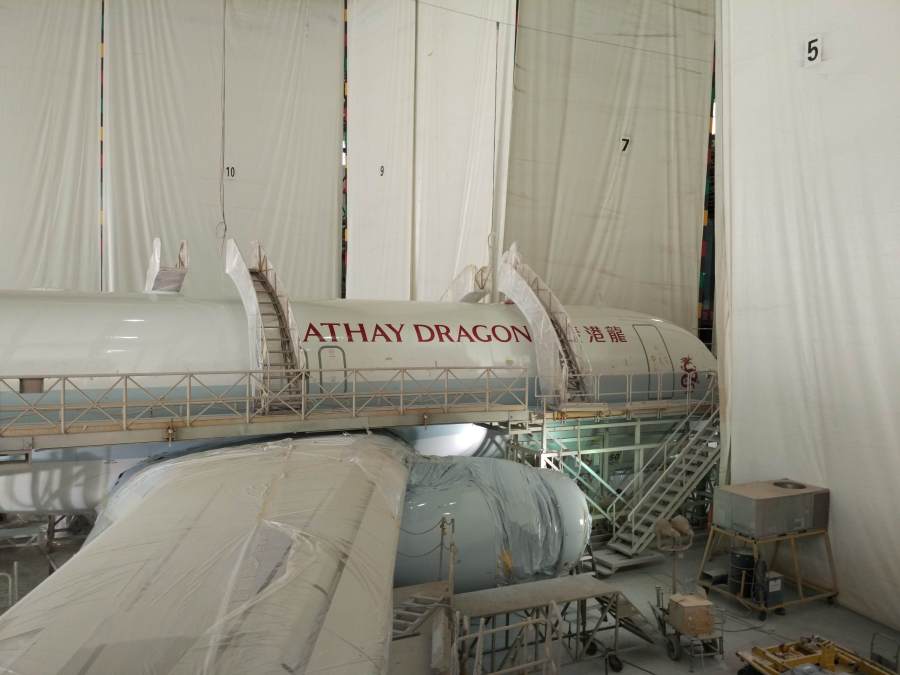 Ruaraidh admits straight away that he has a ridiculously obsessive passion over customer experience and his goal is to make life as easy for possible for passengers. It’s this simplicity and refinement that has shaped the new look and feel of Cathay Dragon, in many ways the carrier seems to be following the mantra “less is more.”

The livery is the major piece of hardware that airlines can use to communicate the brand, and redesigning the Cathay Dragon livery was the perfect opportunity to bring the two carriers in line. 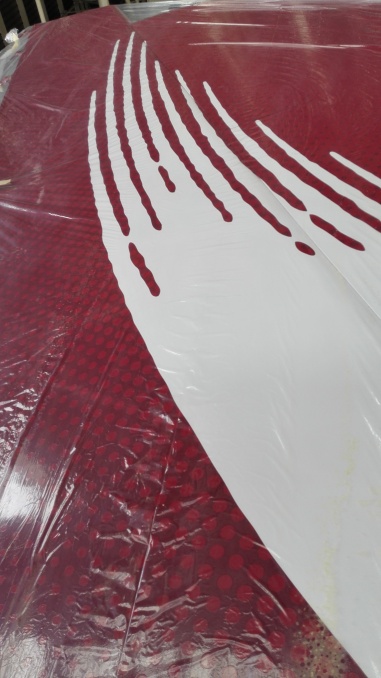 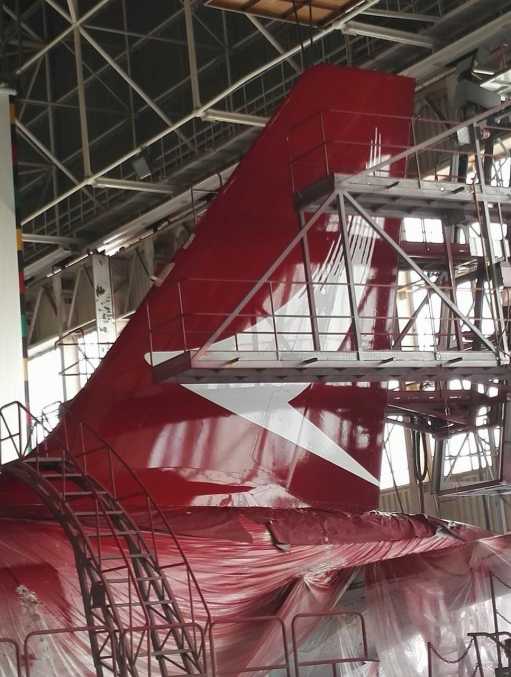 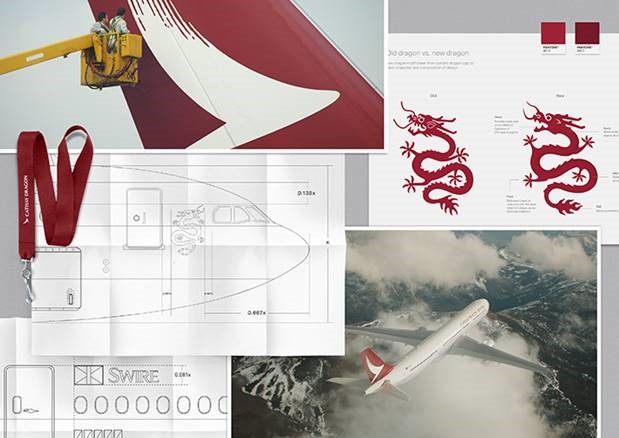 Naturally the livery reveal started to make sense to Cathay Pacific and Dragonair consumers once both carriers were brought in-line however it is just one part of a larger re-branding process. Smeaton had a very clear brief, “It was an opportunity to reinforce this seamless experience of the group as well as bring the two identities in line with one another.” The new liveries, with their distinct Brushwing tails and similar logotype treatment answered this brief succinctly.

Smeaton actually hints at more benefits of aligning the brand. “By having the core livery design on each of the carriers the same, from a maintenance point of view, it means parts can be shared between the two fleets.” For example, engine cowlings could now be interchanged between the two carriers, who share the same fleet and parts. But this was a happy coincidence, the true reasons to align the two liveries of the carriers was much more brand-centric.

“If you were to look at our competitors who offer two sector flights, we have to compete against passengers who will book Emirates connecting with Emirates, or Singapore Airlines connecting with Singapore Airlines. We had to win over International passengers who would fly Cathay Pacific and then an airline they may have never heard of, called Dragonair.

But the challenge wasn’t just for transcontinental travellers. “Similarly our mainland China passengers, would know the Dragonair brand, but not the Cathay Pacific brand. So it was important to make passengers realize that they would be travelling with the same family of airlines. That they belonged to each other and had the same qualities.”

But one issue arose from bringing the two liveries in line with one another. Dragonair’s famous Dragon symbol remained a part of Cathay Dragon’s visual catalogue. In effect, Cathay Dragon had emerged with two visual identifiers compared to Cathay Pacific’s iconic singular brand image. But there was a clear choice to adorn the tail of Cathay Dragon with the Brushwing, less recognized in mainland China. So which iconic emblem was more important to the new Cathay Dragon?

“Absolutely the Brushwing.” States Smeaton, “The Dragon on the livery was to respect the heritage of Dragonair and where it has come from. It was also used to reassure loyal Dragonair consumers that the same qualities of the Dragonair product would continue to exist in the new brand.” 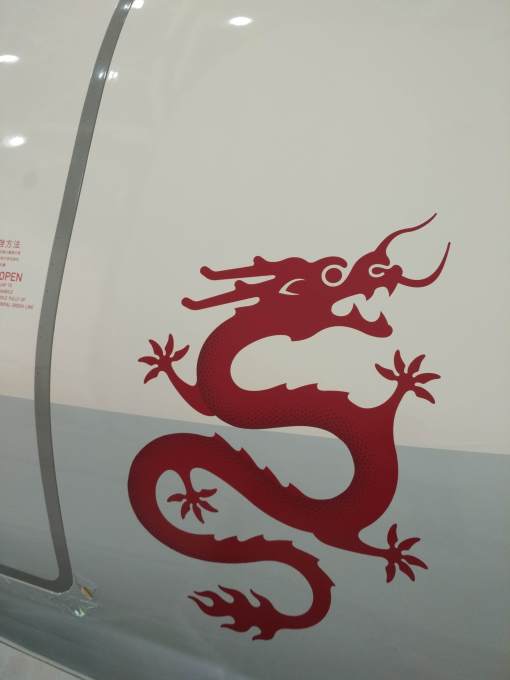 Working with Eight Partnership, the dragon was updated. “We spent a lot of time trying to simplify the dragon and interestingly, by removing too many elements, the dragon lost its iconic Chinese look and feel, so we found a happy balance.” said Smeaton.

“The subtle touches to create a more contemporary look came from unifying the width of the dragon’s body, creating more symmetry with the unique features around the head and body – from antlers to fingers to tail,” said Jeremy Kong, Art Director at Eight Partnership. “The gradient, in addition to giving a bit more depth to the design, also echos the gradient used in the aircraft tailfin.”

The whole design was then approved by the group’s Feng Shui master, to ensure it maintained its important Feng Shui elements. Smeaton explains further that “the master may get involved in a variety of projects, whether redesigning an office or part of an aircraft.”

So the famous dragon will become purely an emblem that adorns the livery, but the Brushwing will become the master logo for Cathay Dragon, and the reasoning for this is “to reassure the passenger that the customer journey is aligned between both carriers.” There may be two different wordmarks, and two different livery variations, but the airlines couldn’t actually be more similar – with the same seats, fleets and the ground products are now virtually identical.

It’s true to say that Cathay Dragon’s brand has been shaped by its current network. “The use of red on the livery is representative of such an important colour to the Chinese and Taiwanese regions the carrier predominantly flies. The use of the Chinese characters on the Cathay Dragon livery reflect the pan-Chinese network, where the lack of them on the Cathay Pacific fleet matches the pan-global network it flies.”

However, from a customer touch-point level people will start to see a change. “Apart from the livery, passengers will start to see all the dragon iconography being replaced with the Brushwing motif. Many items like airport signage will follow the same product design language as the new Cathay Pacific airport signage.” Cathay Dragon however are looking at soft touches that can bring alive the Dragon spirit inflight.

Smeaton eludes to a wealth of small gems to be found in Cathay Dragon’s new customer experience. “It’s a matter of hard product convergence and soft product divergence. So seat design, entertainment, lounges and frequent flier programs will align to drive economies of scale, while we can now look at colour, trim, uniform accessories and service elements to enhance the differences in both airline’s unique personalities.”

But what of the elusive G16 lounge in Hong Kong airport that is about to undergo renovations? Would this be an opportunity for Cathay Dragon to enjoy its own lounge offering?  “The G16 lounge will follow the same design language we are seeing in the Manila, London, Bangkok lounges. It will form a part of the new Cathay Pacific lounges and brought into line with the new line of lounges, shared and enjoyed by both airlines’ customers.”

A natural course of action for the two brands would be to merge, but due to the complexities of the two carriers having different crews, contracts, and operators certificates, means that the process isn’t as simple as we would expect. Therefore there has to be some differentiation. Cathay has used this opportunity though to celebrate the subtle differences between the two carriers – and it seems these two carriers will continue to walk the same path together, just in slightly different shoes.

Stay tuned next month for part three of our exclusive series that will delve deep into the rebranding process for Cathay Dragon, looking closer at the inflight experience.

One thought on “How A Livery Took Flight. An Exclusive Inside Look At Cathay Dragon”