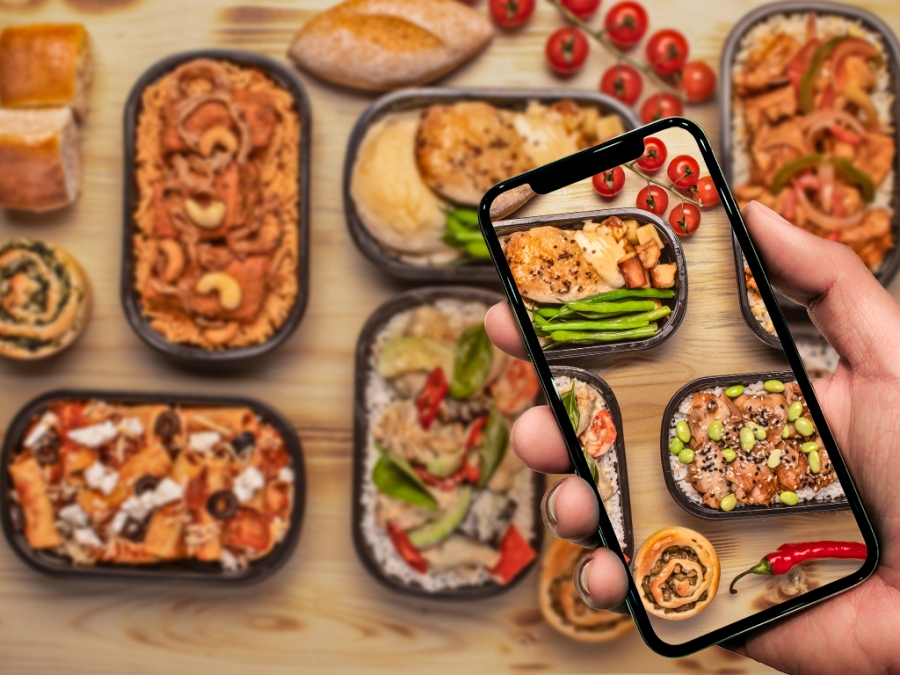 As we announced a few weeks ago, Etihad has revamped its economy service to become more sustainable while offering passengers larger main meals and a restaurant-style service. On first impressions, offering two waves of dining would appear more complicated for the cabin crew, but as we found out by spending a few hours behind the scenes on a Heathrow-Abu Dhabi flight, the new offering not only makes more sense for passengers, but for Etihad’s hard working crew. 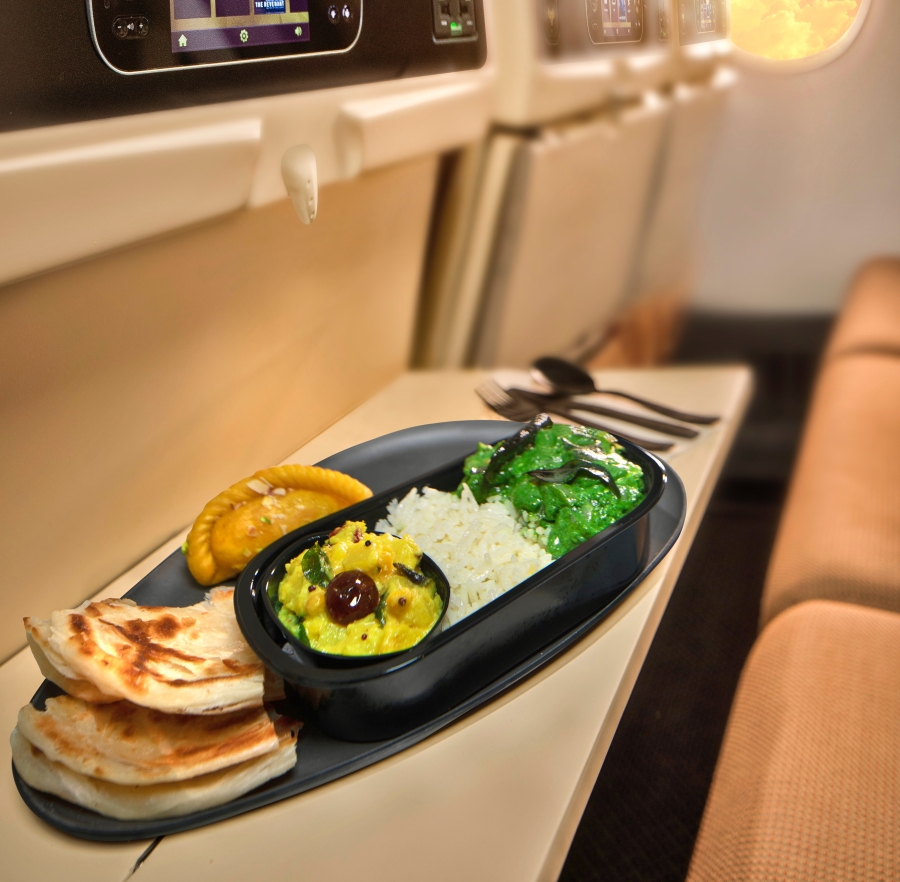 After take off, we headed up to the galley to take a look around and see what these changes mean for the airline. The Cabin Crew Manager Mario and Senior crew member Nitha talked me through the changes. 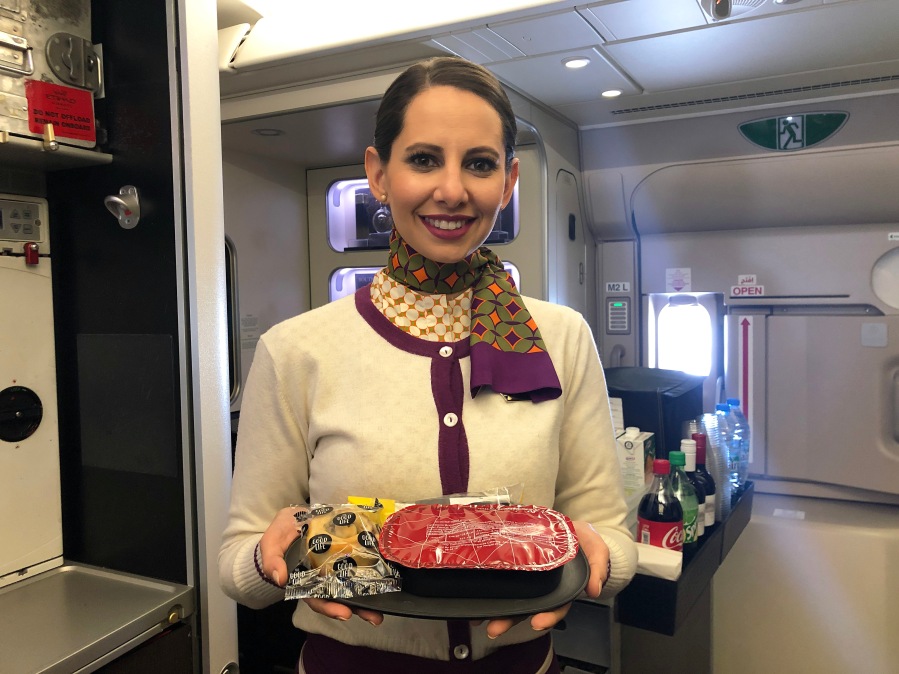 “It’s actually a lot easier,” explains Nitha, “we already perform two runs, heading through the cabin with hot drinks after the main service, so there’s very little difference in what we currently do.” But there are certain advantages. “Actually the main course is a lot quicker to perform, as the service of the dishes on the new sustainable plates are much quicker to deliver,” follows Mario. 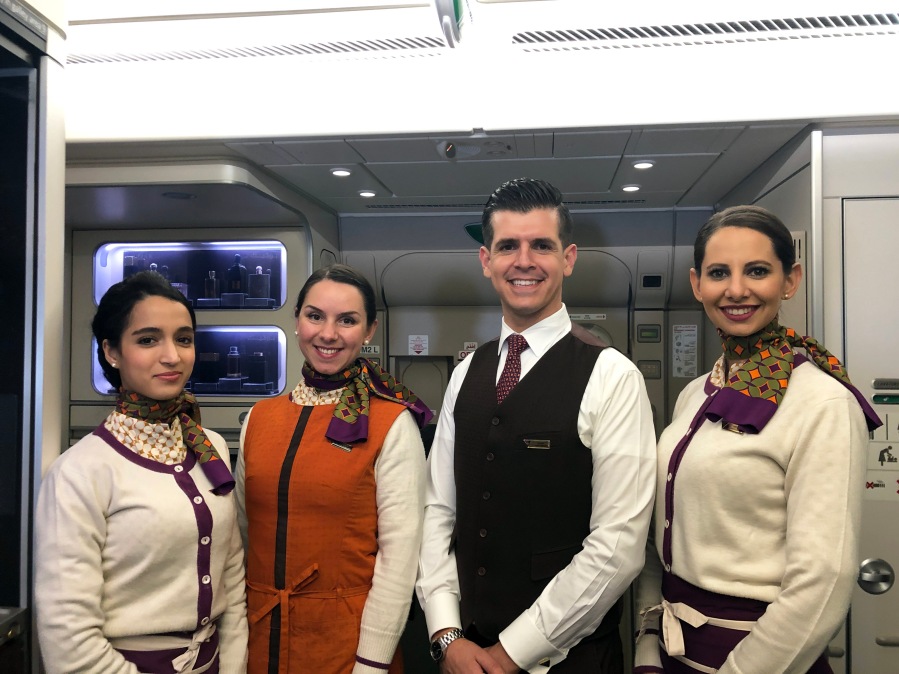 There is logic behind this. As I’m presented the carts I can see how the serving plates are simply stacked in one drawer and the hot dishes take up the following drawers, leaving space on the cart which used to be taken up by the existing service. This actually reduces the weight on the aircraft in comparison to the previous offering. 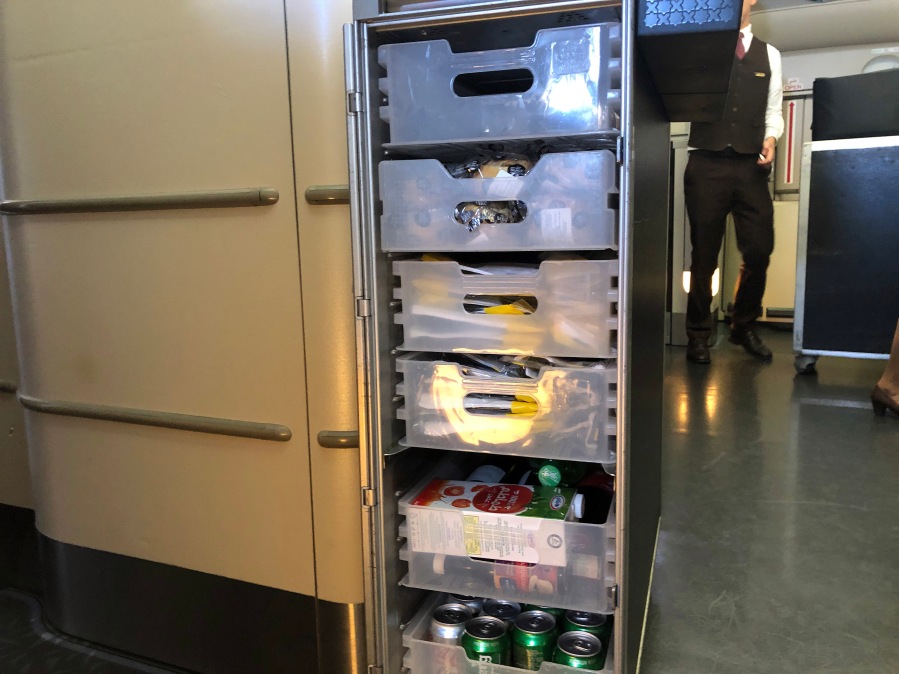 “Our carts used to only fit approximately 40 dishes,” says Mario. “But now we can fit 60 dishes with ease on the carts, which speeds up the service as we don’t have to return to the galley to replenish as often.” This is actually benefitted by the fact the A380 uses two galleys to prep the carts and deliver the service from meaning the service is much faster. 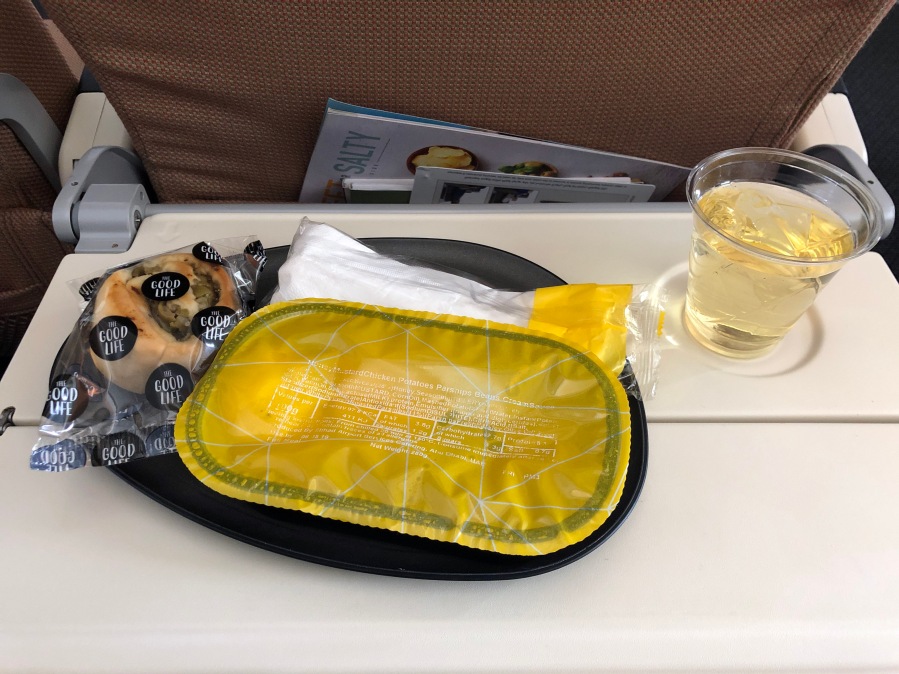 As for the hot dishes themselves, they are cleverly colour coded to make for easy identification, and the lids even feature the dietary details, including ingredients and nutritional values. “We’ve been able to try these dishes, and we actually prefer them to the crew meals, that’s a great compliment as we receive good catering, but we’ve been curious to try the new meals.” 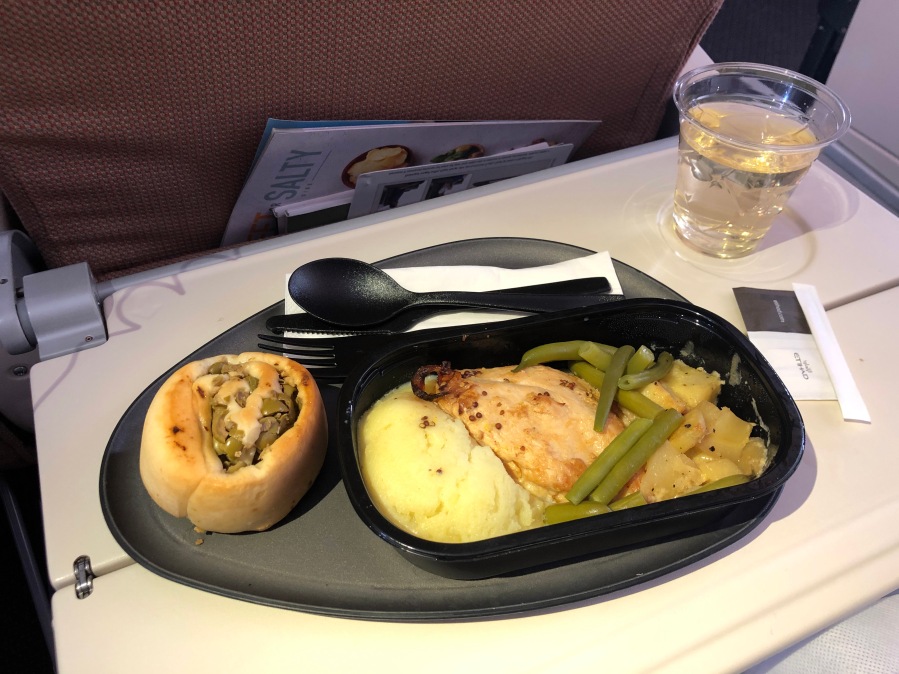 Taking a seat in the Economy Smart Seat pre-service, I’m full of anticipation of what this actually means to the passenger experience. Fundamentally, there isn’t much difference, and that’s not a negative. In fact, that’s a huge positive. The increased portion size and additional ‘scroll’ (savoury roll) make for a substantial meal, without the usual micro salad and desserts, butter block etc. The size of the serving plate and meal dish, being smaller than the usual tray gives a sense of space, which reduces the hidden stress element that always accompanies the food service. The added benefit is it leaves guests with more space on the table to place their mobiles during the meal, making the never-ending personal device juggle so much easier.

It was obvious to see the service was efficient and smooth, not necessarily different from the last time we flew, but there was no extra complications. There seemed to be more emphasis on the drinks service which was a nice touch. The food itself was of great quality, although having both cubes of potato and mashed potato seemed an odd combination, not that we complained, finishing the entire portion. The hero of the course, surprisingly, was the scroll, filled with olives punching huge flavour considering its size. 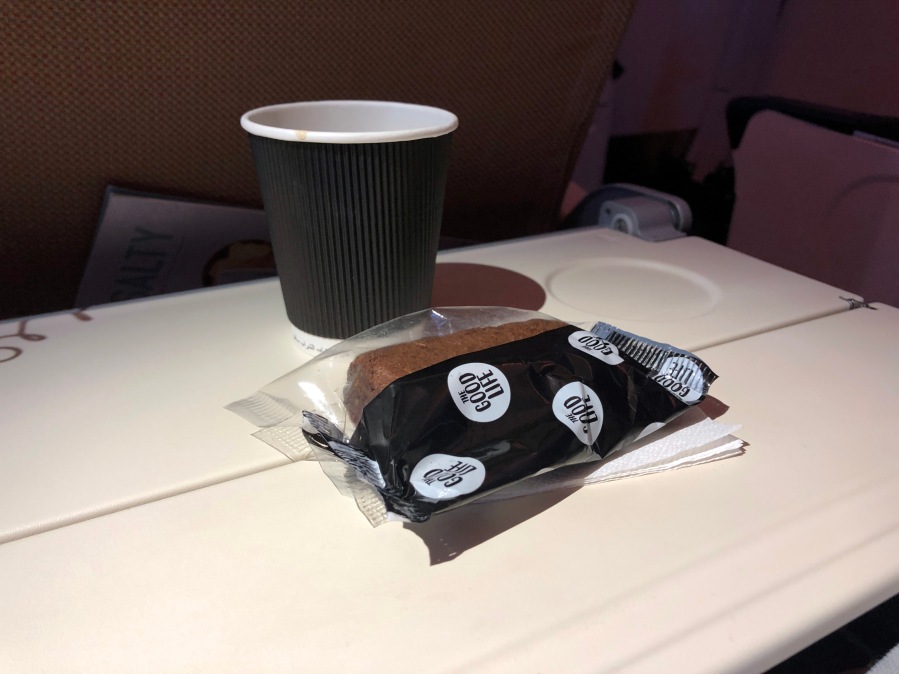 Approximately 20 minutes later, the second service came through the cabin which included a hot drink and a ‘good life’ chocolate brownie as a dessert. While the trays were removed we saw many passengers folding their tables in half, again psychologically giving an enhanced sense of space, something we usually are aware of as soon as we finish the meal, wanting it cleared away as soon as possible. 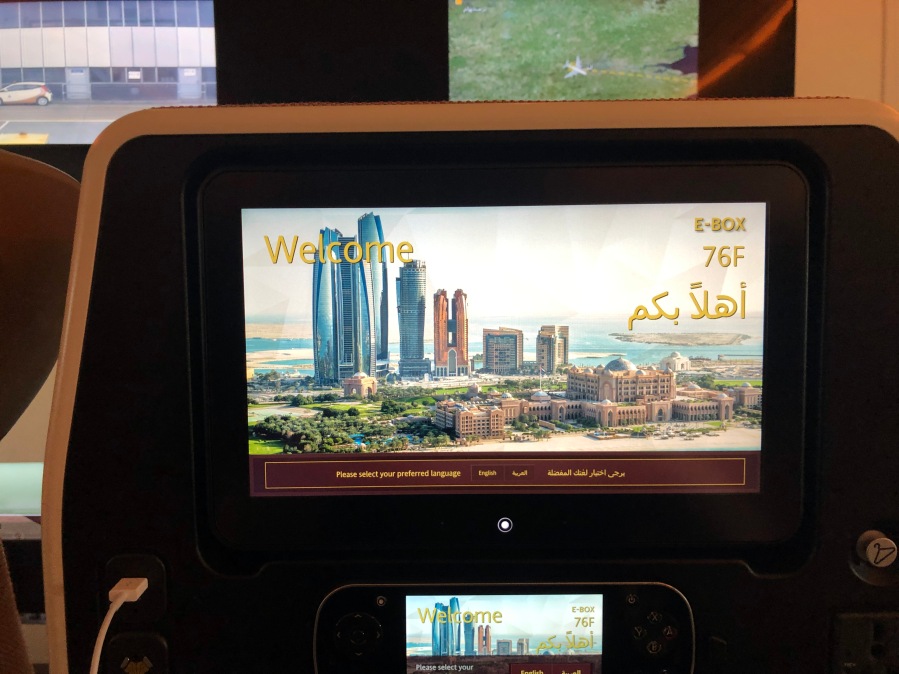 We have to admit, we were quietly impressed with the changes, and while it goes against the grain of the usual service approach on an airline, which may raise a few eyebrows, actually delivers on the needs of a passenger during their journey. 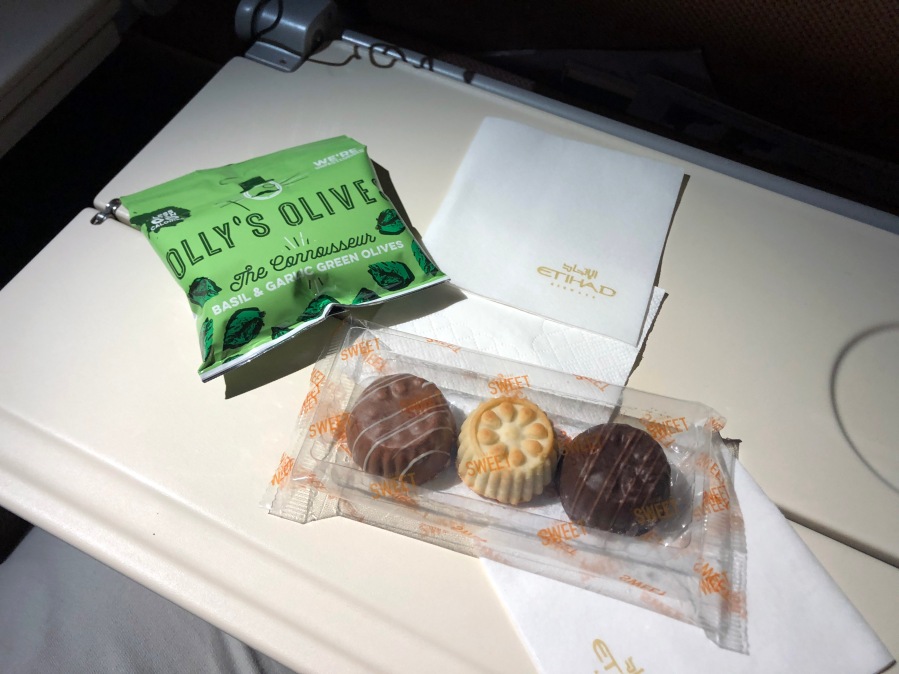 Approximately half way through the flight, we were presented with a buy-on-board concept service, which allows for passengers to purchase extra food should they still be peckish including a range of sweet or salty snacks, from lasagne to olives or the famous Bateel UAE confectionery brand. The dishes are well priced and while it could be seen as a downgrade to the experience, is actually an extra paid-for service on top of the usual complimentary service which passengers already received. 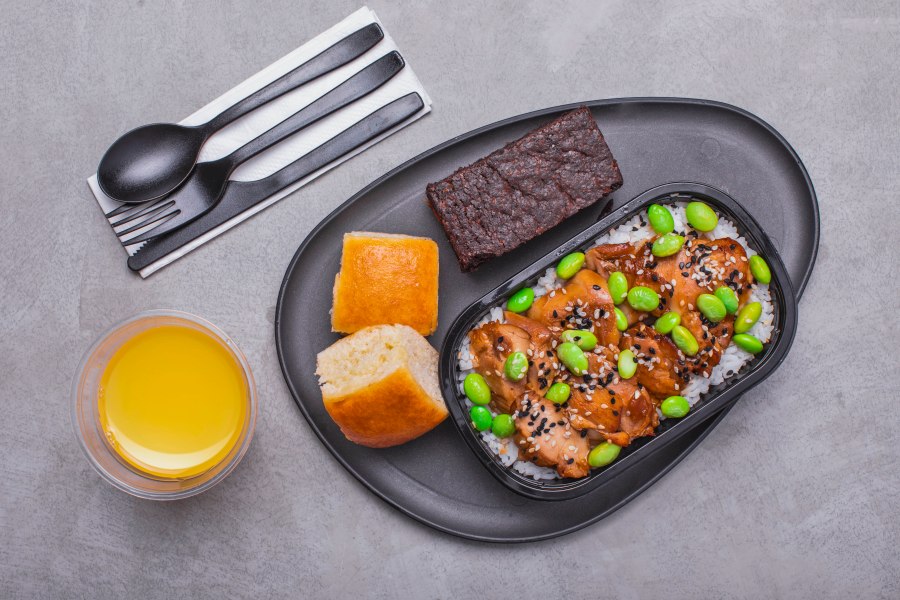 “People are already purchasing the products, and we’re getting a good response, but on the longer flights there is obviously a larger demand for this mid-flight option,” states Mario. We can understand this, as on just a 6.5 hour flight, this mid-flight service doesn’t allow for the hunger to build to be of a necessity. 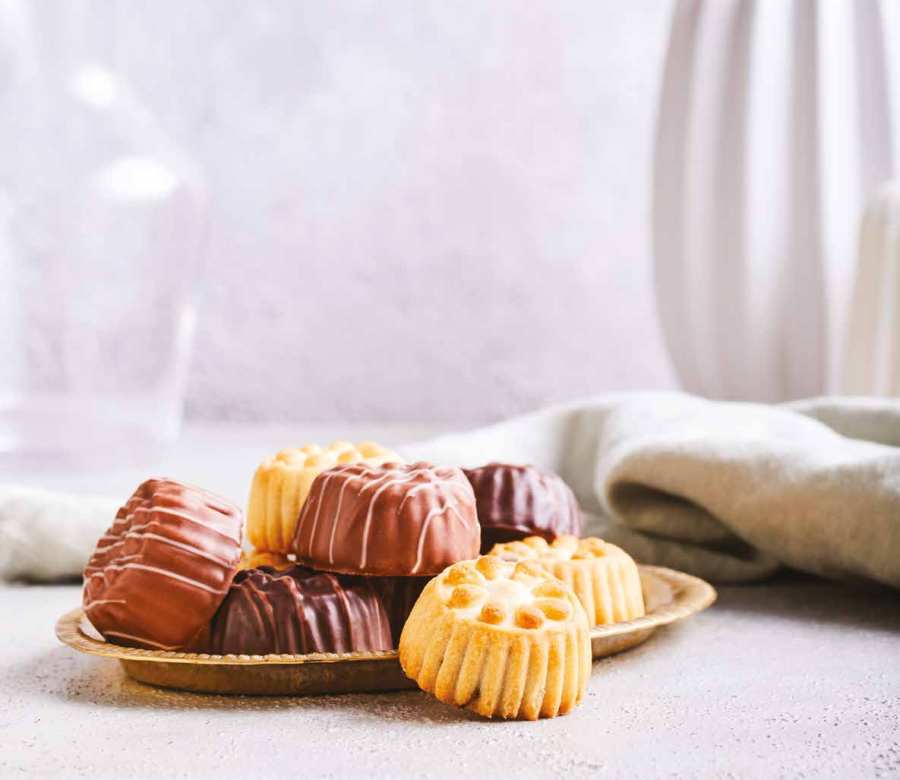 Overall, it seems like Etihad have managed to find a sweet spot (forgive the pun) in this new service, reducing weight, increasing meal size and passenger satisfaction, building ancillary sales and enhancing the feeling of space in the economy cabin, something that can’t be underestimated when it comes to the passenger experience. However, the biggest seal of approval comes in the form of the Cabin Crew, who seem fully behind the product, and after all, happy cabin crew always mean happier passengers. Could it be that everyone wins?

5 replies on “Behind The Scenes: Etihad’s New Economy Class Service”