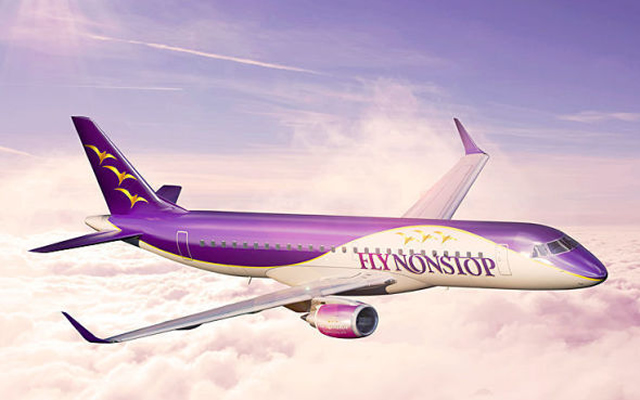 Norway’s Kristiansand might only have a population of 82,000 at last count, but a local Ice-cream businessman believes that the town needs it’s own airline. Not only that, but he’s willing to start the airline up himself. Now just to clarify, ‘Virtual’ airlines aren’t ones that you’ll find on flight-sim, but instead business and brand name owners, but outsource most of their services to other companies. Leasing planes from DenimAir, Flynonsstop is doing exactly that. Launching April next year, Flynonstop’s Embraer 190 will take a potential 100 passengers every flight from Kristiansand to Barcelona, Berlin, London, Dubrovnik, Nice, Palma, Parma and Paris.

The name FlyNonstop is a bit of a weird choice, whilst obvious, due to the company feeling there is a gap in the market for direct services to Kristiansand from across Europe, rather than having to connect through a major Scandinavian hub. But to us here at TheDesignAir, we feel this name is more appropriate to competing against longer haul, hub and spoke airlines.

The livery, whilst only an artists impression is actually not bad, although the typeface is a little unorthodox for a modern airline. A large swash of purple and gold adorn the aircraft in a more and more familiar ‘wave-like’ swash across the world (read: recent 787 liveries for Thomson Airways and United). Pink nacelles give a similar colour palette to Wizzair, but with a much more sophisticated treatment. But for a smaller regional aircraft, which are seen as a second thought for most larger carriers using these aircraft for feeder services, this is a novel and bright concept, easily identifiable with a conceptual flock of birds on the tail.

Whilst there is currently very little information on the airline, and no website to speak of, it’s hard to work out the interior product, but they are pitching themselves as a ‘premium airline’ probably similar to other regional carriers such as CityJet, Lufthansa Regional and KLM Cityhopper, all offering free beverages and food onboard. This little start-up might be worth watching, but sadly, with a core passenger base of just under 80,000, it’s hard to see how this will survive with the every growing Norwegian airlines, and former Scandinavian giant, SAS fighting for passengers in the region.

Do you think an airline like this will survive? Let us know below?