JFK is one of the busiest and most congested airports in the world. Here at DesignAir the airport experience at JFK was one we used to dread, fearing outdated over populated terminals with confusing signage and generic uninspiring shops. But now, that’s all changed thanks to Delta’s newly re-opened Terminal 4, which all Delta and Virgin Atlantic passengers can experience. We applaud this practical and modern update which has learned from the passenger experience to create a sympathetic and well-executed Delta branded product. 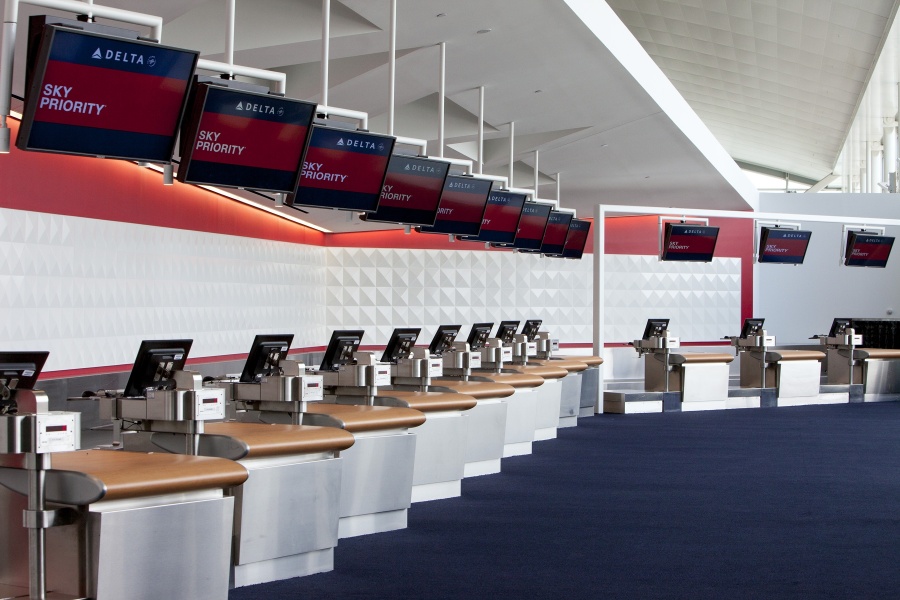 What’s more, the terminal has been dragged kicking and screaming into the 21st century. Whilst there isn’t anything as futuristic as they have been working on at TED such as the photonic showers, the overall experience seems a lot more tactile and user-friendly. Some of the biggest advancements are within the business class passenger offerings all packaged under the ‘Sky Priority & Sky Club’ banners.

The Terminal 4 Delta Sky Club, the largest in the Delta system, offers travelers superior amenities and a unique customer experience. A chef-designed menu of cuisine such as sushi, cheese, charcuterie and dessert will allow customers the option of enjoying a pre-departure meal, enabling them to sleep immediately after takeoff. Master Sommelier Andrea Robinson, who also selects Delta’s Business Elite wine offerings, has developed a premium wine-by-the glass program for the Club with many vintages usually available only by the bottle, including Dom Perignon and Muga Prado Enea, Gran Reserva. Additionally customers needing privacy within the Club can reserve the Ciroc Lounge, which offers a private space with seating and entertainment.

The one element we love the most is the new sky deck, which looks more like a hotel rooftop pool bar than airport lounge, which is available to all guests using the Sky Club. The Sky Deck (Pictured first here) is a well proportioned 2,000-square-foot terrace developed in partnership with Architectural Digest. Renowned designer Thom Filicia was selected by Architectural Digest to create a distinctive space that will offer passengers runway views and the comfort, convenience and relaxation they have come to expect from the award-winning Delta Sky Club.

Excitingly, this isn’t the last we will be hearing from Delta’s Terminal 4, as the second phase of their project, penned in to complete in 2015 will add a further 11 gates, replacing their use of terminal 2, and expanding the whole terminal to feature 27 gates.