IAG launched its new airline yesterday. Called ‘Level’ the airline will be based in Barcelona, also home to IAG partner airline, Vueling. The announcement showcased the new interiors, brand positioning and livery.

Level’s brand language approaches younger, more inquisitive travellers that have possibly been restricted by cost of long-haul travel. The visual palette reflects an instagrammed world, with warm retro-grading to the footage. There is a clear decision to also use footage that is shot from a POV perspective to act as a way of including the viewer.

There is also a clear green and blue colour palette, which naturally distances itself from a specific country. This could pre-empt a further roll out of the low-cost carrier from other destinations across Europe to long-haul destinations. The colours come to life in the simplistic livery and the use of the iconography that supports the brand messages. 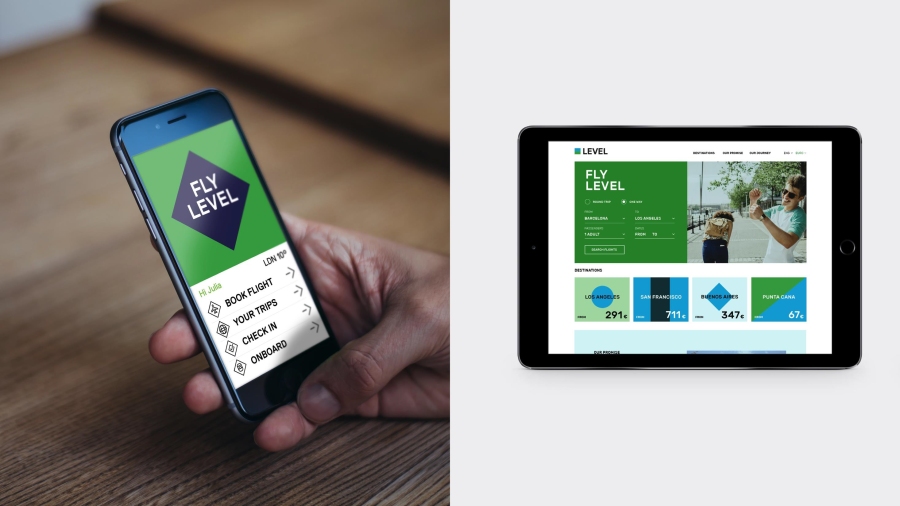 Perhaps a subtle nod to the signal flags, but some of the icons actually represent letters in a nautical environment. There are other elements that reference an aeronautical world, and even those without a strong eagle-eye could spot the fact that the shortened phrases used in the video are somehow meant to reference airport codes, as well as shortened text speak used by millennials.

The logo itself represents the artificial horizon in the cockpit, with green for ground and blue for sky. The name of the airline, that uses the somehow optimistic phrase ‘Fly Level’ (we’d hope so!) references flight levels, the altitudes that aircraft flies when above 10,000ft.

What do we think? We struggle with the brand positioning. It’s clearly directed toward a young, explorer demographic that have been brought up on the Internet. The video even references that. However, these millennial are already savvy consumers, they know how to get cheap fares from OTAs with the likes of Skyscanner or Expedia, so immediately tell your target audience that they’ve never had an airlines before doesn’t sit well with us. After all well-established Norwegian in the European market and Vueling in Spain also speaks to the very same target audience. (We would have loved to have seen Vueling add a long-haul arm to its operations, rather than another IAG brand dilution)

This young dynamic brand image also sits at odds with the hard product, which offers contemporary, cool grey interiors. These interiors are actually the basic Iberia economy seats with a simple headrest cover with the green/blue logo stamped on it. This has helped keep the airline’s start-up costs down.

The premium economy seats are also the seats that Iberia will be rolling out across its own fleet. Although, unlike the Iberia cabins, there are no business class seats. Instead the airline will fit out the aircraft with three rows of premium economy in a 2 x 3 x 2 configuration. These 21 seats will be supported by a larger economy cabin of 293 seats in a 2 x 4 x 2 configuration.

While the airline is offering cheap tickets to Los Angeles, Oakland, Punta Cana and Buenos Aires, which certainly are attractive, as well as providing the opportunity to earn Avios. However, we believe the brand needs more depth and substance to truly connect with millennials who are looking for a language that truly represents them, and we hope this will come to life as more brand elements surface and the airline finally launches in June.