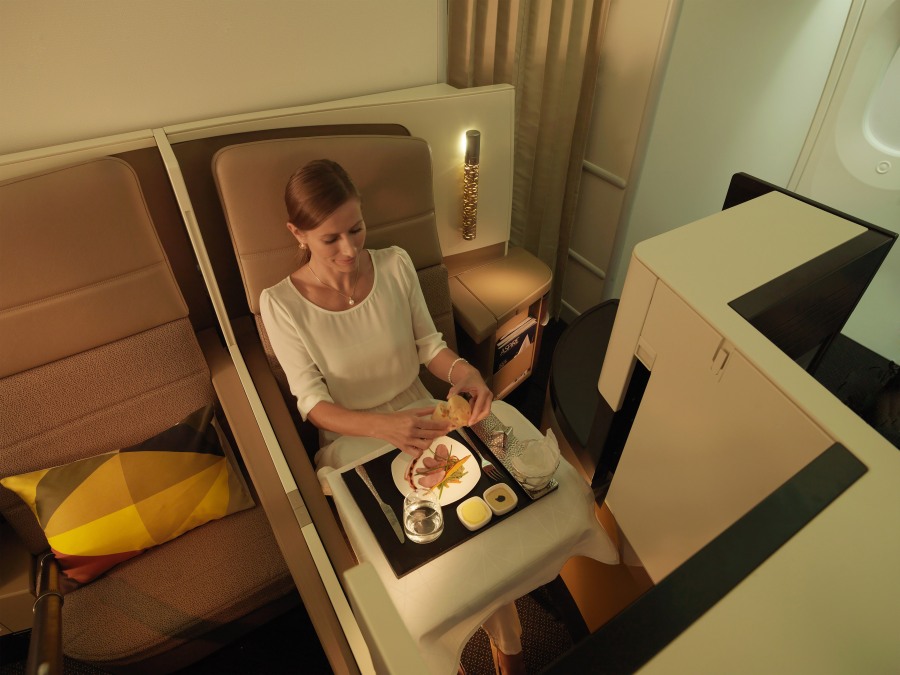 Part 3 | Business Class. It’s possibly one of the hardest cabins to design. Customer expectations are high, margins are low and space is at a premium. Now with the advent of premium economy and the still-standing First Class sandwiching the most popular of premium cabins, there are diminishing touch points that differentiate the class. Industry standards, created by peer pressure from intra-airline rivalry and customer demands have meant any cabin not offering all aisle-access, fully flat beds, and AVOD are seen as inferior, aged products. The increasingly fast turn around of cabin design has also meant that within each airline, there is inconsistency in most aircraft’s product, due to each airline’s continually evolving fleet.

With such a relentless evolution of the business class cabin, it almost seems unimaginable that a business class product originally conceived fiveyears ago, could still impress and offer unseen innovation even against the latest business class releases. But, thanks to the EDC, that is exactly what Etihad have managed to achieve on their brand new A380s.

On first glance, its hard to see a major development here, all seats offer aisle access, they are all flat beds. It’s on closer inspection that details start to reveal themselves alongside the mammoth undertaking. 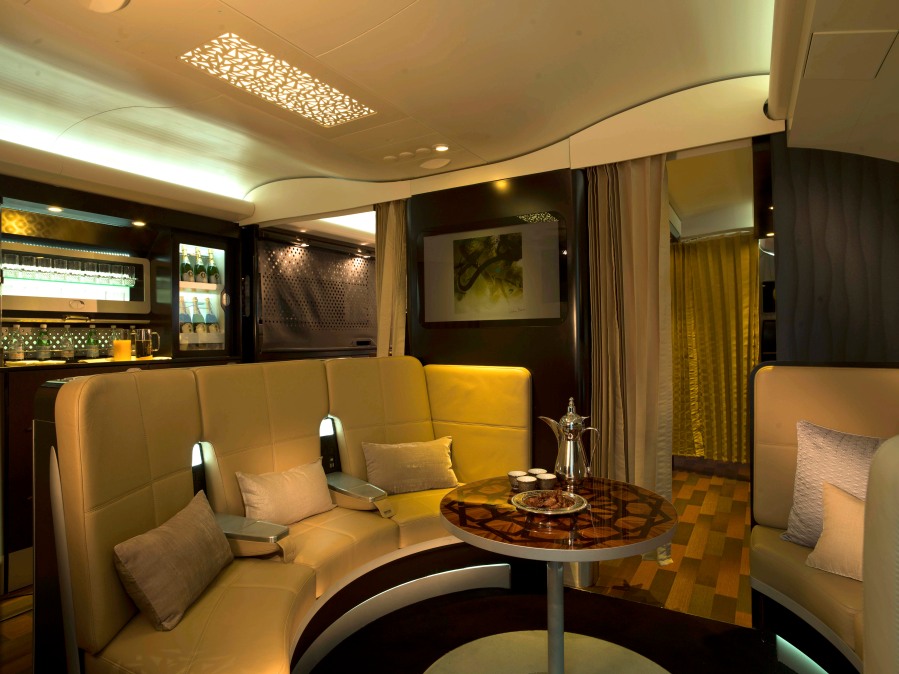 The EDC really pushed Airbus to the structural limits of the A380, insisting that the entrance and galley space be shifted to offer greater cabin comfort in both classes. The lobbyon the upper deck, with its hidden galley spaces is over 2.5 tonnes in weight. Shifting such a behemoth and integral part of the aircrafts structure really was an engineering marvel.

The entrance foyer to the Premium cabins, situated on the upper deck, was key to the experience. Adrian Berryfrom Factorydesign explains. “This was the first impression of passengers as they boarded. We wanted to create a warm welcoming space.” Reminiscent of a hotel lobby, gone are large metal corridors of never ending rows of catering carts. “We designed the space to hide the mechanics of the galley. That included reinventing the mechanisms so that no trolley locks or latches were visible”

It makes a huge difference, and added an extra level ofcomplexity, as all non-standard amendments had to be approved and rigorously checked by aviation authorities, but to a passenger, the effect is impressive. It also highlights the A380’s biggest selling point. Space. The giant aircraft (dubbed ‘Super’) was always envisaged by airlines as a hotel in the sky, with vast amounts of floor space. Sadly, as it is used in ‘commercial’ aviation, the space quickly became a revenue stream, and the large areas originally concerted by Airbus turned into passenger accommodation. Some of you may remember the initial concepts by Airbus, which included a separate restaurant area, shops (demo-taken up by Korean) and even a gym.

Etihad have cleverly showcased their relaxation area as soon as your board, reminding passengers they can socialize, host a meeting or put their feet up somewhere else on Ultra-long flights, unlike competitors such as Emirates, or Korean, who have placed the space at the rear of the aircraft, meaning first class passengers have a long walk through a populated business class cabin to reach it.

One of the main tools to customise the whole experience, is the lighting design, pieced together by Factorydesign. The company pushed Airbus, and as such, Airbus have run dedicated lighting panels in each of the cabins. Meaning the cabin lighting can be effectively adapted in each of the cabin zones. Not only have they ditched the standard light ropes that are usually used in the cabins, they have effectively redesigned dedicated ambient lighting, in partnership with Acumen and Honour Branding. Acumen have designed feature ambient and tasklight fittings in each of the premium cabins, showcasing the intricate craftsmanship involved.The meal table light (developed with Wasp)has a unique feature, projecting a light cone that is exactly the same shape as thetable therefore minimisingcabin light pollution. Factorydesign created gobos, mimicking the light and shade created by the fretwork roof of Abu Dhabi’s Louvre museum set to open. The fractal pattern echoes through the design, and the dappled light areas in first class and the lobbyadd to the illusion that this is no ordinary flying experience.

The circular seating section that forms part of the onboard lounge isn’t just a fancy design element, it’s carefully thought through, and mimics the seating that is culturally sensitive. Honour Branding showed in their presentation how in the Arabian peninsular, story-tellers used to talk around camp fires sat in circles, and this circular seating created a space to communicate, talk and interact with others. This is simply a modern version, designed to create interaction with fellow travellers. That is, if business class travellers can be lured from their spacious Studio seating.

The business class ‘Studio’ is a marvel in LOPA. It’s seating configuration gives ample space, and seating angles give the illusion of even more. This isn’t just a simple 1 x 2 x 1 seating config. Much like BA, half the seats face backwards, and half face forwards. I asked whether passengers minded sitting backwards onboard, and how much research went into it. Andy Williams from Acumen responded. “British Airways have had their seating configuration for years now, and since its launch passengers have embraced the configuration. In fact, some passengers prefer sitting backwards as it gives them a sense of more security – these already formed opinions along with our rigorous mock up testing at flight and take off angles, to maximise forward and aft facing seat comfort, confirmed that the aft facing seat scenario shouldn’t be feared.”

Unlike a train ride, sitting backwards on a plane is a totally different experience, mainly due to the far away distances involved, and therefore the feeling of speed and information in-take into the brain is far removed. Unlike Etihad, with BA’s original configuration, the rearwardfacing seats mean having to step over your partner to get out of the seats, and the privacy screen (if travelling solo) to us is a game of who presses the button first. United Airlines, who also offer a rear facing business class seat did a worse job in their 777s with 4 narrow rear-facing seats in the middle, all facing a wall of TV screens, making for a communal nightmare.

Etihad, and American Airlines (also designed by Acumen) have solved the issue, mixing the 1 x 2 x 1 configuration with forward / rear facing seats to provide every seat with aisle access, whilst the introduction of rearward facing seats provide more space for every passenger as the widest part of our body is our upper half, and legs requiring less space, can be tessolated together to create more space and a more commercially viable product.

Not only does Etihad’s new business studio offer large amounts of real estate, greater than some first class products, the passenger has access to large areas of useful side furniture and cocktail areas. The additional surfaces aid service and allow guests to place laptops and personal belongings on them whilst not interfering with their dining experience. “Users enjoy the idea of having storage and workspace in their business class seat.” states Anthony. Cocooned by sleek lines, the suites are private, and lit with a wealth of ambient lighting, making for a softer feel inside the cabin.

The fore and rearward facing configuration basically means two seat designs. Much like Etihad’s first class, the Business Class’ rearward facing seats, are angled slightly further backwards, to provide more comfort on take off and landing, and even the bed length varies slightly. The slight diagonal of the seat layout also provides the illusion of more space by increasing the distance of the users eye-line when entering the suite.

The one clear winning element in the entire A380 business class experience from Etihad is the sense of openess, created by the new entrance way and lounge, the forward and rear facing seats, the clean simplistic lines in the seat product, intelligent cabin ambient lighting, all-aisle access and even elements, which we will go into in more detail next time, such as the restrooms in the premium cabins, which offer a first for the aviation industry – angled corner toilets to subtly increase the space within the same footprint!

Here are some facts on the design of the A380 and B787 Business Class Studio’s:

Coming next, are the challenges involved in creating an economy class that exceeds expectations, and how all the galley spaces onboard had to be completely redesigned from scratch.