So, finally the wait is over, and I have to admit, I’m not really surprised, many guessed a very similar treatment to the all new American Airlines livery, and many got it quite close. Now whilst the logo had been received to much fanfare, and much hype. I can’t help but feel utterly disappointed with their answer to an iconic look.

American has sported the same stunning livery for some 50 years, so in my eyes, it was going to have to take something iconic and powerful to replace it, however, they have created a dated look from the get-go. Let’s dissect it in more detail.

Meet the new steely-blue American, Not much changes with the logotype at first glance, and really, there have only been subtle changes, changing from a deep blue, changing the occasional shape and spacing to the letters, and instead softening it and obviously ‘modernising’ it. I have nothing bad to say about that, infact, it is quite refreshing, however they have created an icon to replace the eagle. Now if you watch the video they are touting on their website, they show the history of the logo, each one with an easily identifiable eagle. Jump ahead to this logo, which they state contains the eagle, and you’ll have to look a couple of times to see it. In essence, it is just two coloured blocks interrupted by a curved ‘thing’. Yes, it’s very clever, and will sit amongst the easily identifiable logos on apples logo quiz apps for years to come, but it doesn’t say anything about the airline, or what it stands for. If anything it reminds me heavily of the Mexicana logo.

A few problems arise from this logo, which they haven’t come close to solving yet either. In duo-tone, such as etched onto a glass or piece of cutlery, or embroidered onto an apron or uniform, or in black and white printing, the logo becomes even harder to understand, and will just look like two random slanted rectangles. Nothing is clever about that. Expect to see the word American and the logo always together on any consumables, never just one and not the other. 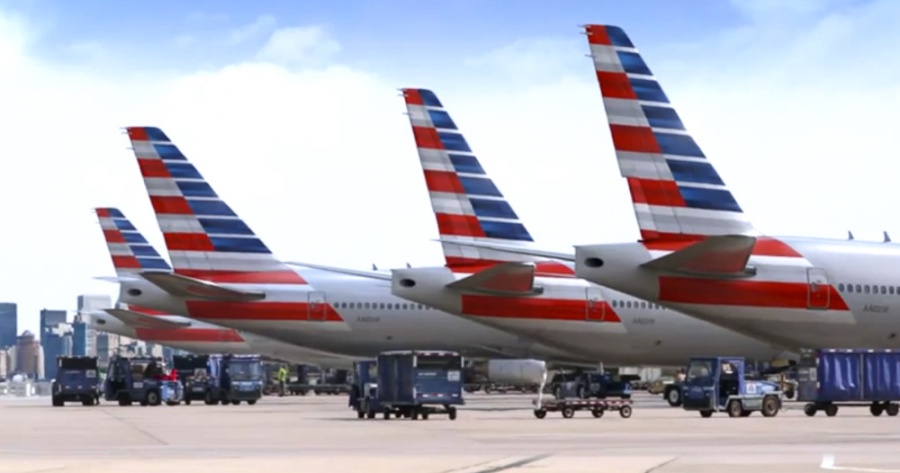 But, the piece de resistance, and the thorn in my side, has to be the tailfin. Whilst it is the most obvious tailfin ever, in my opinion, it stands out like a sore thumb from the rest of the branding. The typeface, logo and even website makes the airline look like the ‘apple’ of airlines. However, this tailfin, makes it look like a charter airline for an American cruiseliner. They state that they want their look to reflect the ‘modern travel experience’ which they are putting on board, and this tailfin has to be a huge step backwards for them. In fact, it’s similar in concept to North American Airlines. My big pet peeve, is they had to make it more complicated than it had to be with several different stripes of blue being used. (An obvious nod to the idea of the stars of the american flag blurred by the speed it travels through the air)

I’m disappointed, as American, with all the management and brand power they have, have opted for a mismatched and in my opinion misaligned brand. American planes were iconic, classic and really gave a feeling of the heyday of glamorous travel. This new brand just sits them amongst the masses. Nothing stands out here, nothing is unique, or original. If this is the ‘future of travel’ then maybe I just need to buy a motorhome. I give the tail-fin a few years, before you will see the iconic and irreplaceable eagle, in some form, in all its glory once again.