As the phrase goes, “good things come in small packages.” In 2018, the airline industry carried 4.4billion passengers. It has become an integral part of human life, but it’s also an industry of behemoth players. In fact, in 2018, the top 10 airline groups transported over one third of the entire annual traffic, leaving the 200-some other major carriers to fight over the rest. Those are staggering figures.

But that list of major players aren’t airlines we would place in the ‘cool list’, instead they’ve become human logistics companies. With American, Southwest, Ryanair and Lufthansa Group all featuring in the list, none really light a creative spark, or are seen as incubators of innovation. The only true carrier on the list to showcase an innovative DNA streak is Delta Air Lines, who recently has invested heavily in trying to create a magical experience in every class.

But that’s not because of vanity, it’s done specifically to position itself differently in the US, one of the most competitive markets in the world. It’s fighting hard to create brand preference so it has to innovate to win over non-loyal passengers with ‘surprise and delight’ moments.

It’s no surprise that the carrier has invested in the likes of Virgin Atlantic, of which it’s the largest minority shareholder, owning 49%. While Virgin has recently made the news by asking for help from the government, it is no different from other airlines globally looking to their government to support them in one of the largest disruptors to passenger aviation in the history of the industry. In fact, the US has also just announced a rescue package for its airline industry.

Raising eyebrows within the UK, Sir Richard Branson has already said he is investing more money to shore up the company. But why are we as a nation, or as a world, better off helping keep airlines like Virgin Atlantic in the skies? It’s not just Virgin mind, there are many underdogs in the industry, from Air New Zealand which punches well above its weight, Hong Kong Airlines – the more spritely competitor to the larger Cathay Pacific – or Etihad who is pitted against its larger next door neighbour Emirates. Right now, all of them are facing an unknown future.

These smaller airlines have had to innovate, using their scale as their strongest asset in the battle for winning over passengers. Virgin Atlantic was born over 30 years ago to challenge the monopolies in the skies, bringing affordable fares to the masses. However, it’s not been an easy battle, 70 years behind the land grabs its main competitor British Airways had made in solidifying its route network.

Instead of trying to increase its network and spread its focus too thin, Virgin Atlantic cherry picked profitable routes and aimed to compete by offering passengers more. From inflight massages and onboard bars, the airline made a name for itself. It was the second airline in the world to introduce Premium Economy and one of the first to introduce fully flat beds in Business Class. 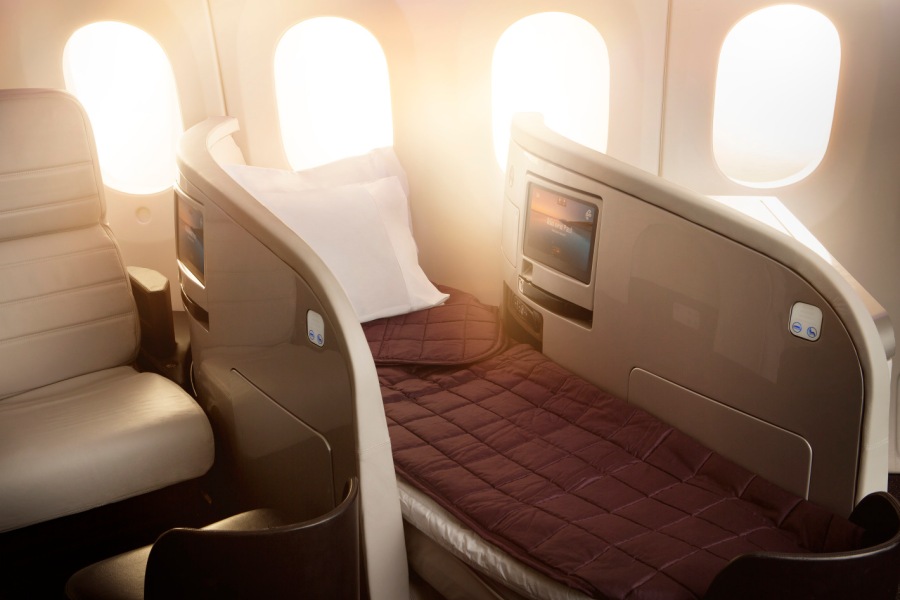 In fact, the business class product is the same seat found on Air New Zealand, who licenced the design to feature on its long-haul fleet. Air New Zealand continues to innovate too, recently revealing a concept bunk bed in economy, it dabbled with its own Space Seat for premium economy and created the SkyCouch – an economy seat that folded out into a cosy bed, which has become popular with other carriers across the globe too.

Even the latest entrant into the Asia market, Starlux, is looking to radically change passenger perceptions, providing all business class passengers flat beds even on short hops and a range of products and merchandise to elevate the passenger and brand experience.

Without these brands, who are constantly innovating, challenging the ‘sea of blue seats’ and looking to disrupt passenger expectations, passengers will not only find that the airlines they are up against will see little point in investing in passenger experience, but can increase the fares found on the monopoly and duopoly routes that exist all around the world.

As an example, it’s been rare for us to find a direct flight between the UK and Sao Paulo, Brazil for less than £900 in economy, that’s more than flying London to Sydney. The reason being BA and LATAM, the only two carriers flying this route have a codeshare, allowing them to control the market. As soon as Virgin announced its launch, fares drastically dropped to approx. £550 return for all three carriers.

But it’s not just fares, this move also saw LATAM bring its new product to the LHR route more frequently in a bid to win passengers over with a more competitive modern inflight experience. Over the past two years, we’ve seen Qatar Airways (still a fairly small carrier in the greater scheme of things) bring out its new QSuite, deciding against the more traditional First, Business and Economy LOPAS. Since then, we’ve seen a wave of other carriers launching new business class suites with doors.

British Airways was one of these carriers, who quickly added a door to an existing hard product to bring it in line with passenger expectations. It will be still some years before the airline is able to retrofit its fleet, which is synonymous with the tired, cramped hard product which isn’t as competitive as many of the airlines it codeshares with.

Yet BA is still yet to reveal its new First Class product on the A350-1000, which has been hinted as just a minor improvement on the previous 787 product. Unlike Qatar Airways, the airline decided against removing ‘First’ on its new aircraft, but hasn’t decided to up the bar in comparison to the products found in Asia or the Middle East. Why not? Could it be that there is very little competition in this cabin class across BA’s network, and therefore there’s less of a focus on creating a truly outstanding halo product? Instead, right now the focus is on Premium Economy and Business Classes where the greatest profits can be made.

Competition is key, and smaller carriers like Virgin Atlantic, Hawaiian Airlines and Starlux show us how their brands can punch well above their weight, bring the joy of innovation to the skies and keep fares competitive. So right now, we hope that governments won’t look to only keep legacy and flag carriers afloat, but keep their competition that keeps them in check, alive too, as it benefits the passenger no matter who you chose to fly with.

One thought on “Opinion: Why the world needs innovative airlines like Virgin Atlantic and Air New Zealand”