Our TheDesignAir Top 10 lists have undergone a revamp in 2014, and to aid transparency, our top 10 airlines will now have their rating out of 100 shown, as voted for and calculated by our judging panel. What is interesting for our Top 10 International business classes 2014 is the wide ranging percentage scores within the top 10. Many airlines scored between 60 and 70%, and quite a few just missed out on the top 10 list. 5 of last years list have dropped down the list, signalling the ever changing product levels throughout the industry. Our top 10 really reflects airlines that have invested into their product, or who still are seen as innovators.

2013 saw British Airways launch its new 787 and A380 aircraft slowly being rolled out across the network, and with this, the newly improved ‘Club World’ seats. Whilst we aren’t the biggest fans of the back to front seating configuration of the cabin (because of climbing over your neighbour), the improved seats fit perfectly with the new look premium economy and first class cabins. Whatsmore, in the 787 cabin, the solo rear facing seats in the centre of the cabin are the epitome of privacy. The new fleet are just the touchstone of the improvements across the network, including new business class lounges and spas, and improving service levels including at seat drinks service (rather than from the trolley). Even more, the new IFE, with better resolution screens and improved seats make sure that BA keeps on top of its product, offering the best it possibly can. However, with many One World carriers now embracing the reverse herringbone seats with greater space per passenger, we question how long BA will keep hold of the more cumbersome seat layout they have.
www.ba.com

Virgin Australia may be new to our list, but its product is long lasting (since the launch of its 777 fleet) and the alignment of the V Australia and Virgin Australia brands have brought together a more unified product. The Virgin Australia experience is one of three Virgin brands that are in our list, and is of great competition to Qantas. Their business class product includes an inflight bar and the infamous row 5, which is super private and intimate and super friendly cabin crew. On the ground, an ever improving product, with a great new lounge in Melbourne is testament to the investment the airline is making into their product. Virgin is seen around the world as a market leader, and their friendly cabin service, comfortable seat and added social extra of an inflight bar, means the offering is better better than ailing Qantas.
www.virginaustralia.com 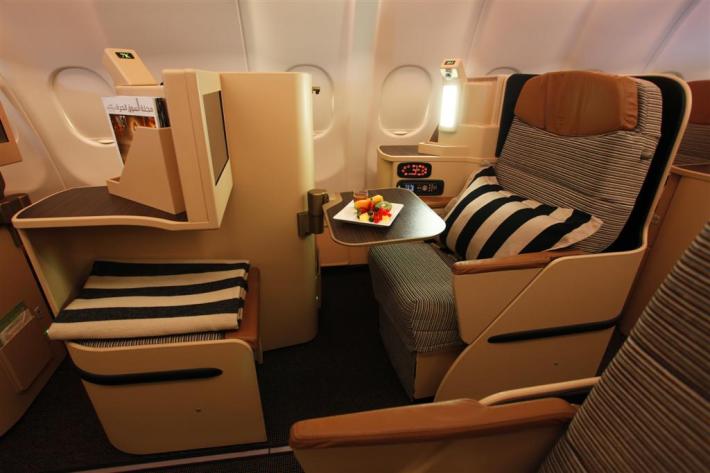 Etihad has featured for the last two years running for good reason. Their product is still an impressive forerunner in the airline industry. We love the staggered seating environment, their clean modern lines that really make the airline a contemporary business class which the worldly traveller will have come to expect in this day and age. Mix together fine dining, massage functions, a fully flat bed seat, and each one of these boxes are well and truly ticked. Whilst the ‘World’s Leading Airline 2013′ has an award list as long as it’s arm, the business class cabin itself hasn’t won any awards for the past couple of years, but we here think this cabin is consistently of award winning quality, and firmly deserves its place in our Top 10 list. Plus secretly we are huge fans of the ‘Humbug’ bedding, super chic!
www.etihad.com 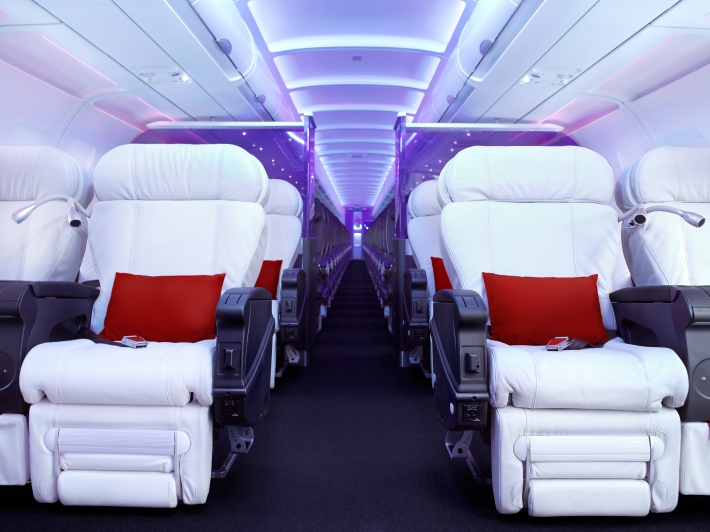 So whilst strictly speaking Virgin America‘s short haul aircraft aren’t the first thought when it comes to international travel, with their flights across the border to Mexico, they do fall into this category. The second of our Virgin brands to enter the list, this little upstart airline just oozes cool. So they don’t have flat beds, or a turn down service, but these international flights are short hops and they pack a punch. Big white leather recliners, AVOD that is full of hidden extras and both The Loft in LAX or the Virgin Clubhouse in San Fran as bases, mean that it’s never been cooler to fly to Mexico than now. The service is brilliant, the food excellent and the seats super comfortable, but what we love the most is the mood lighting, in seat messaging, and wifi onboard. If only all American carriers could follow the mantra of Virgin America.
www.virginamerica.com

Virgin Atlantic recently won our Top 10 Cool Airline brands 2014. The airline was the first airline to introduce Premium Economy and first to introduce individual IFE screens to business class passengers. It has been an innovator since it first started, and whilst it hasn’t created anything really groundbreaking in the past few years, it’s still an airline of choice. Whether travelling on their slightly older Upper Class Suite or their newer one, expect privacy, and a fully flat bed with separate mattress side for a more comfortable sleep. Also extras such as PJs, amenity kits and now onboard wifi on the A330s mean the airline is offering more of a first class product, but manages to match the price of British Airways. They also feature higher on the list than their BA counterparts due to a few key reasons, no trolley service (bar the afternoon tea service) more friendly pro-active cabin crew, and that extra privacy. Whilst best for solo travellers, the ottomans still mean it is possible to dine with a partner. We will be doing a full A330 report in the next few weeks at TheDesignAir so stay tuned!
www.virginatlantic.com 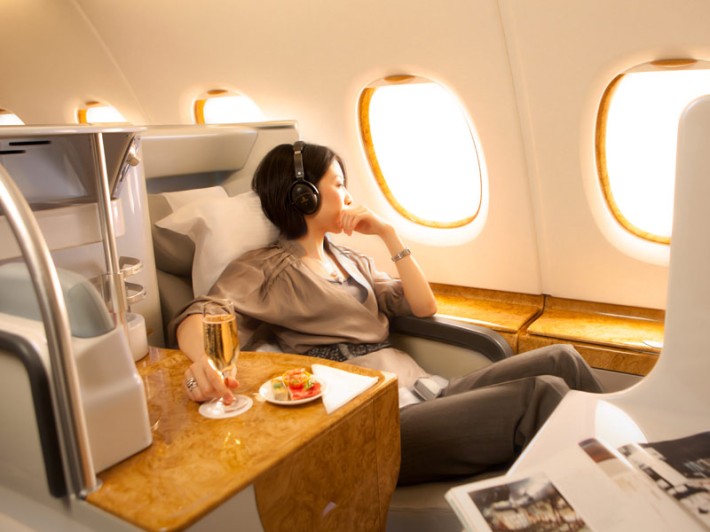 Whilst Emirates have a varied product in their business class cabin, they do have an excellent business class product on their A380 fleet, which is quickly being rolled out on all the major international routes. The success of the airline is very much based on their use of the A380, and its comfort and space. The business class seat in its herringbone format is perfect for both solo travellers, and the dual seats in the centre of the cabin perfect for partners travelling together. Together with a roomy and well appointed bar, the upper deck of the A380 is a haven for international travellers, with mammoth amenity kits, and a huge IFE selection played on a huge IFE screen, there is a lot that Emirates offers. On the ground, chauffeur drive service and a gigantic lounge in Dubai make sure that the product is all encompassing. There are no surprises they feature highly on the list, although the older generation aircraft with lie-flat seats and the occasional dip in service levels has left the airline a few points short.
www.emirates.com

Qatar’ hasn’t shifted place this year, scoring a very decent 90 out of 100. Here’s why. Chauffeur services, private terminals, award winning cuisine and service, it is a pure delight to fly with Qatar even before you board. And when you board, the new 787 seating are next generation and competitive with their Middle Eastern counterparts, but not only that, they’ve recently announced new seats to replace the older ones on the A330 fleet, and new flat beds for the A320 fleet. But the previous versions, which cover most of their fleet is still excellent. The new A380 which will launch on the London route this year will be the perfect reason to fly with Qatar.  Winning countless awards inclusive of Airline of the Year 2012 by Skytrax, it is no surprise that the name is on our list, but with the introduction of the new business class seat (pictured above) across the fleet or the improvement of the current seats would boost the airline to the top of the airlines.
www.qatarairways.com

Korean have just a wonderful and elegant product. Light airy cabins, beautiful cabin crew and excellent food and drink, as well as great connections through Incheon make for a great connecting airline between Europe / North America and Asia. The flat bed ‘Prestige sleeper’ seats especially on the A380, that take up the entire top deck, are matched with a ‘Celestial Lounge’ which whilst super clean and modern in appearance, is the perfect place to soak up a martini and chill out with a good book or friends. The whole ethos of the ‘Korean Air’ product is to experience effortless luxury, and they produce it vast amounts. Our judges get excited when they get the opportunity to fly with Korean, as they epitomise the Asian luxury carriers at a fairly decent price point. For those in need of some retail therapy, it’s also the only airline to offer an onboard real life Duty-Free shop. The pristine cabin crew uniforms also won our Top 10 airline uniforms 2013.
www.koreanair.com

Cathay Pacific has never failed to impress, and can hold its own against Singapore Airlines, or any of the Middle Eastern carriers, synonymous with lavishing luxury on guests. Last year Cathay even won our best international business class 2013, a testament to the new seats they have rolled out through their fleet. What Cathay Pacific has done over the past three years is really impressive in the form of lounges, cabin crew service and frequencies, making them an airline of choice, whilst ensuring their price point still remains competitive. We are huge fans of Cathay, and their design ethos. Simplicity, functionality and luxury all work in harmony to create a quiet environment which makes the passenger the most important element. See why we love Cathay Pacific in our trip report.
www.cathaypacific.com

This scoring of 100 from our judges is rare, and well deserved, showcasing how faultless we feel Singapore Airlines’ Business Class product is, and securing it first place on our list. Last year we stated that if it isn’t broken, don’t fix it, but Singapore Airlines have done just that. Designed by JPA, the new business class seat is even better (can it be possible) than the previous incarnation of the seat – which is more First Class than business class. But the cabin crew, and food are still the biggest selling point to fly with Singapore. Fine china, excellent and extensive menus, beautiful wine pairings and champagne until you are full (and a little giddy) are all reasons to take to the skies with what still is the best airline in the sky. Sadly, they are also perhaps some of the most expensive, as when we have looked at travel options, Singapore has never come up the cheapest option across our flight options. With a home in Changi airport too, the whole experience from booking your flight to arriving at your destination, is effortless, and is as close as it gets to the ‘JetSet’ yesteryear we all wish we lived in.
www.singaporeair.com