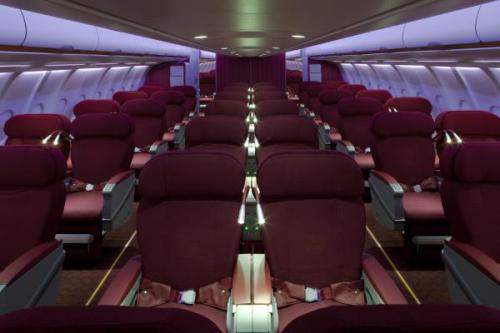 Raising the question ‘Will we ever learn?’ Hong Kong Airlines seems to have dropped it’s premium flights between Hong Kong and London Gatwick, only months after starting them. Add this to the recent news that the all-business class Singapore Airlines flights between Singapore and JFK now offer economy seating in them to bolster yields as well as long trouble OpenSkies, who have cut back to one route after failed launches of both Washington DC and Amsterdam, now also offering economy seating. It seems that the long haul business class model is struggling to take flight.

Is this just due to the economic climate? Quite possibly, however airlines seem to always be slow in the uptake of any great global economic shift. Before the big recession a few years back, huge indicators were pointing the way of things to come, with Oasis Hong Kong, MAXJet, Silverjet and EOS all crumbling shortly after being launched. Recently, long haul low-cost carrier AirAsiaX struggled in the Europe market mainly based on an economy class product, before pulling out altogether. PrivatAir‘s long running leased out private jet style routes of all business class had started to shift to offering economy seats only 2 years back.

Why it hasn’t worked

The major issues with offering a premium service is that the turnaround times and utilisation of the aircraft is key in a low cost model to generating the capital to actually make a profit. Sadly, as soon as you operate a long haul route, just as legacy carriers have to manage, staff costing to staying overnight, along with extra staff on flight times over 8 hours actually add up to huge expenses that a short haul carrier doesn’t have to pay out. Then, turn around times (Such as Hong Kong Airlines) sometimes mean the aircraft can be on the tarmac for 15 hours. Airframes cost vast amounts of money. For them to even touch a profit, they need to be in the air much longer than they are on the ground.

Airline network and frequent flier programs also offer some role to play, with no real connecting flights on these ‘stand alone’ airlines, no feeder traffic, and no loyalty program that can actually benefit them on any other airline (EOS did plan on this, but the FF program never actually took off)

All of these airlines have also tried to compete on routes with already functioning Business Class or First Class services with other airlines. So loyalty to those airlines would always take preference. Most of the times, these airlines use non-central airports (Orly for Openskies, Stansted for MAXjet, Luton for SilverJet, Gatwick for Hong Kong Airlines, Stansted for AirAsia X) which aren’t as convenient especially for business class travellers as their central counterparts.

Do all of these factors mean that it is impossible to run a long haul low cost premium airline? In this market, it would be extremely difficult, near impossible, but in my opinion, still do-able. Correct fuel hedging, well thought out routes that don’t offer the usual pitfalls, an attractive timetable, a well connected network and frequent flier program and a product that offers something new to customers should all be up in the mix.

So what can be done?

What does strike me as possible, and most likely something that will be a success in the upcoming years is a premium carrier for short haul. Low cost is dominating this market worldwide and whilst that offers great prices, it is pulling the current legacy carriers to cut costs to compete, shedding the extra benefits for travelling with them, such as in-flight entertainment or catering, making them just about as attractive to fly as their low cost counterparts. This is creating a hole for airlines such as metropolitan carriers like Virgin America to be launched in Europe and Asia. A higher quality product, with excellent first class offerings such as big comfy chairs instead of the usual ‘same-pitch-but-without-the-middle-seat-class’, brilliant in-flight entertainment and a wealth of goodies that actually create a value added experience. Whilst Virgin America hasn’t yet made a profit, they are opening in America, an already vastly saturated market. Europe is very much piece-meal right now, with plenty of opportunities to be made.