Cathay Pacific have recently managed to swell their schedule to a whopping 5 flights a day to London, UK. That additional daily return flight means that there will now be 35 flights a week between London and Hong Kong. Flown predominantly on their 777 fleet, the airline is fighting the middle eastern carrier supremacy at one of the world’s busiest airports. Cathay Pacific Chief Executive John Slosar said: “We are offering our customers the best of all worlds.  First products that are second to none including our new long-haul Business Class, winner of the Skytrax Best Business Class in the world award.  Second, people and service that have earned us recognition as a five-star airline.  And third, the choice to travel when it is convenient with multiple frequencies throughout the day.”

We are great fans of Cathay, they have featured in both our Top 10 Brands, Top 10 business classes, and we are thrilled their premium economy is being well received across the industry. What’s more, to add to their lengthy list of awards, Cathay Pacific has been awarded ‘’Best Airline Transpacific’’ and ‘’World’s Best Cabin Staff’’ by Skytrax in June 2013.

There seems to be a trend, generated mainly by the Middle Eastern carriers, that one stop long haul luxury is a way to travel, and can in some ways offer more creature comforts than travelling direct, and now, Cathay has also added frequencies on routes from Hong Kong to India, Japan, Malaysia, Singapore, Taiwan and Vietnam. Through its sister airline Dragonair, it has also added new routes into mainland China, as well as Da Nang in Vietnam and Yangon in Myanmar to name just a few. This means a whole new destination network has just opened up. 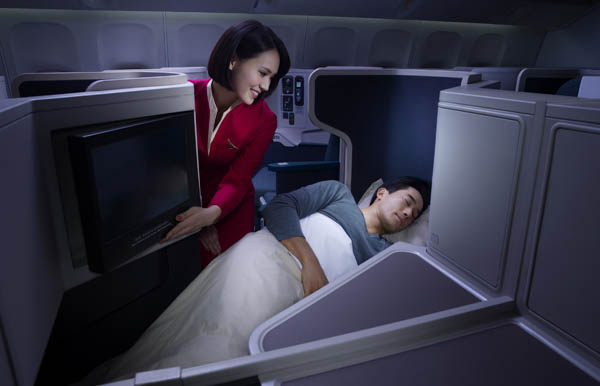 Our little tip? Save up and spend a little extra, and go for Premium economy or even business (Or first class if you have some spare cash under your mattress), on such a long flight, these are the times to really splash out on a few extra creature comforts. Or why not enter Cathay Pacific’s latest competition on Facebook to win yourself a holiday to Hong Kong! We certainly will be!